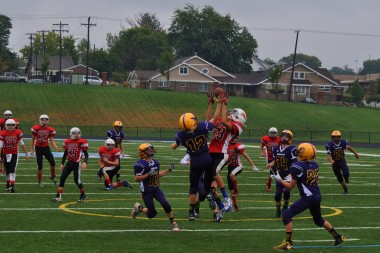 The Mishawaka Catholic Saints — short on experience — and their foe, the Westside Catholic Cardinals — lacking numbers — both had tumultuous regular seasons and were hoping all of the long practices would pay dividends in the playoffs.

The Saints would have the opportunity to strike first, as quarterback Quentin Nellist placed the ball in the bellies of his go-to backs Zack Bryan and Xander Marien, promptly marching 48 yards down the field until the ball rested at the 3-yard line.

With the Cardinals back on their heels, Bryan scampered the last three yards to pay dirt, giving the Saints the first blemish on the scoreboard between the two teams in more than 35 minutes of play, Alek Markley’s kick was true, making the margin 8-0.

The Cardinals did not have the luxury of good field position as they started their opening drive in the shadows of the goal posts at the 23. But the long field would not deter the Scarlet-clad squad, as it used a combination of pitches, handoffs, passes and sneaks from their quarterback and team leader Breydon Zielinski, who orchestrated a 13-play drive. On the receiving end of Zielinski’s opus were Zachary Lannoo, Jack Duddleson and a newfound diamond in the rough, Connor Litka.

The heroic drive was stopped short of the goal line as a crucial penalty was followed by the Saint defense battling over the ball. Would-be receiver Lannoo squeezed the pigskin at the end zone on a 4th and 15 play.

The long field would now be in the Saints to-do list; however, huge chucks of yards were eaten up by the likes of Nellist, Marien and Bryan, and the 11-play drive culminated in Marien falling into the end zone from the 5, making the score 14-0.

The Saints would get one more break before the half, as Zielinski’s errant pitch bounced on the turf and was gobbled up by Dylan Welty, giving them the ball at the 39 with just a minute left. After a run by Bryan, Nellist found tight end Will Christianson for a 19-yard touchdown. The kicker, Markley banged the ball through the uprights, making the score 22-0 going into the intermission.

Both defenses would stiffen in the third quarter. The Saints and the Cardinals were unable to pierce the goal line, leaving one quarter for Westside to advance.

The Cardinals regrouped and found big yards in their combination of Zielinski’s precision passing and running. But on a counter from 8 yards out, Litka was able to finish the deal, making the score 22-6.

The Cardinals would make two more late runs at the Saints, only to fall a little short and give Mishawaka Catholic a much-needed win and a place in next week’s round of four.

“I just want to compliment Coach Tony Violi for being a class act in how he plays the game and develops his kids,” remarked Cardinal Coach Giles Horban. “I thought we played tremendous for a team of 14; they played together, handled adversity, played smart and, most importantly, matured during the season. I’m very proud of them.”

“Westside was well-coached, but they had some difficulties with numbers today,” explained Violi. “Three things really excited me about our squad today; the defense played great, Bryan developed into the solid back we knew he could be and the offensive line of Christianson, Jayden Semak, Andrew Geiger, Setefano Sete, Hunter Stevens and Cole Wojciechowski performed outstanding.”

The entire schedule can be located on the Inter-City Catholic League’s website at www.icclsports.org