In only its third year within the Diocese of Fort Wayne-South Bend, Totus Tuus, a weeklong summer catechetical program, is spreading from one parish in the Fort Wayne area to five other locations throughout the diocese, bringing fun and faith to children in 11 parishes.

Bearing the name of St. John Paul II’s personal motto for consecration to the Mary, Totus Tuus strives to instill holiness in the lives of children from elementary through high school.

The program is based out of Wichita, Kansas, and first spread to the diocese of Peoria, Illinois, which provided the original team of missionaries to St. Jude Parish in Fort Wayne in 2018. Beginning this year, a four-person team – two men and two women – were recruited from within the diocese to expand the program locally.

The director of religious education at St. Jude, Julie Schleitwiler, learned about the program while living in the Joliet diocese and working for The Diocese of Rockford, both of which hosted it. “When I was in the Rockford diocese, I’d heard kids who’d gone to the program talking about how wonderful it was,” she said. Over 30 dioceses now have Totus Tuus programs, and the number continues to grow. 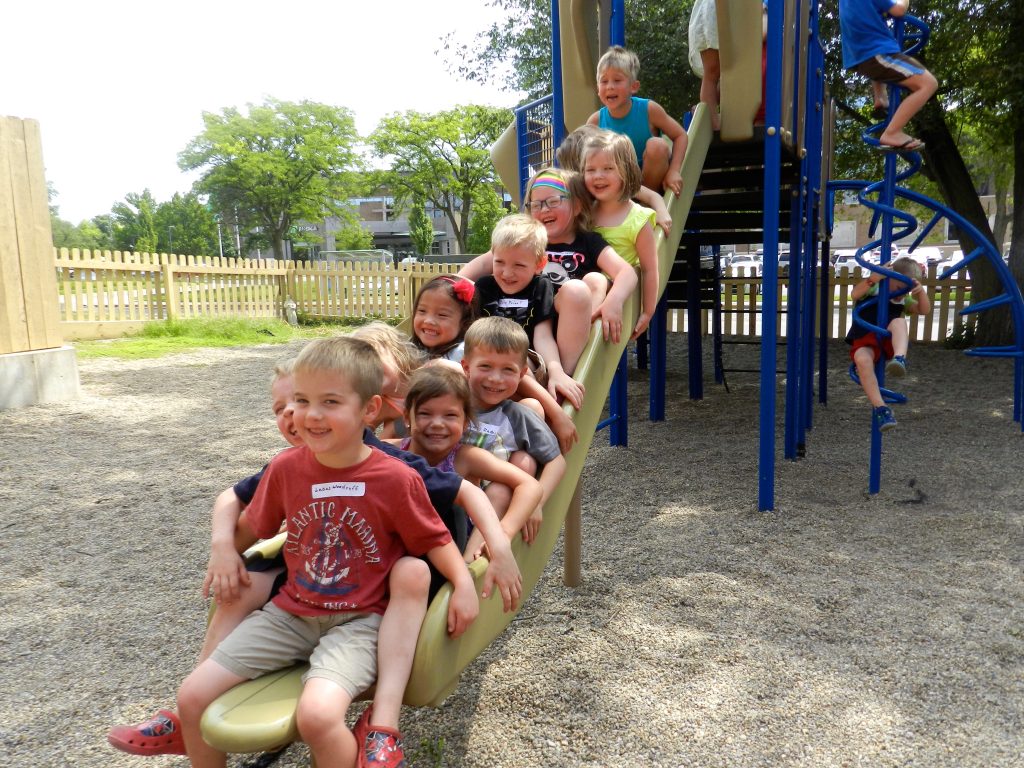 A Totus Tuus preschool class poses for a photo on the playground at St. Jude. Even young children are able to join the fun and learn about the mysteries of the rosary at Totus Tuus summer catechetical program.

With the support of Msgr. Robert Schulte, she helped bring the program to St. Jude. Last year, not only had St. Jude planned to host it again but the parish had already recruited three college-aged missionaries who were ready to train in Peoria before taking the program to other parishes in the diocese. Because those plans had to be canceled, Schleitwiler worked with the diocesan Youth Ministry office and the Office of Catechesis to make it happen this summer instead.

The team will begin weeklong rounds on June 12 and will continue their missionary work until the end of July, hitting six different communities across the diocese: Fort Wayne, Kendallville/Albion, Auburn, Bluffton, Notre Dame and Mishawaka. Most of the locations consist of a combination of two or more parishes that latched onto the opportunity to host the four-person team in their area.

Totus Tuus is not a modified vacation Bible school. It was distinctively created for Catholic parishes, teaching the mysteries of the rosary and intentionally including elements such as adoration, daily Mass and confession time. Children are divided into three age groups for elementary students: first and second grade, third and fourth, and fifth and sixth. Middle and high school students attend evening sessions. 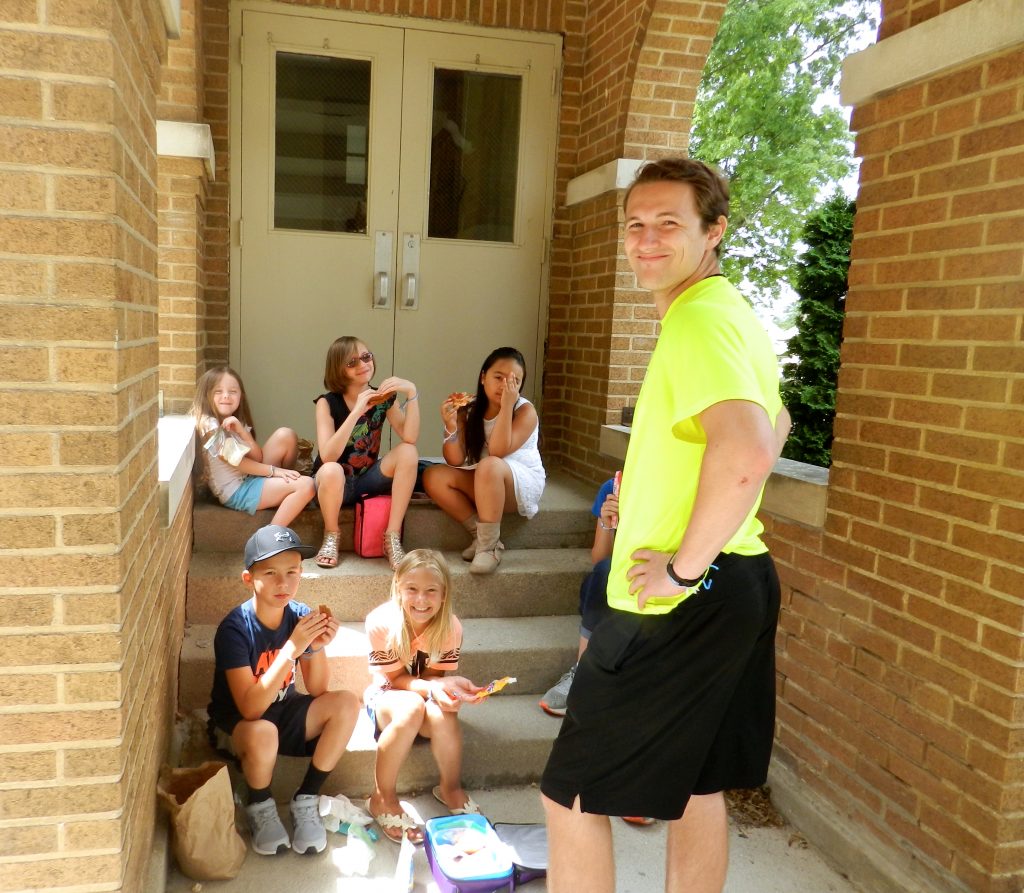 Provided by Julie Schleitwiler
A Totus Tuus missionary enjoys a short break with a group of grade school children at St. Jude Parish in Fort Wayne in 2018. Totus Tuus is a summer program created specifically for Catholic parishes, mixing theology and fun for students from grade school all the way through high school.

The middle and high school students delve deeper into apologetics and even have an opportunity to ask the missionaries anonymous questions on the last evening. Schleitwiler said this helps students relate to the faith because, “They’re asking people who aren’t that much older than they are, especially the high school kids.”

Skits and humor are tools the missionaries use to reach younger generations. The children get to participate in fun outdoor activities, including a water fight at the end of the week. Schleitwiler said learning about the Catholic faith “should be beautiful and fun. It should be an incredible discovery.”

Typically, Totus Tuus tries to recruit local college students and seminarians to serve as the missionaries because they are closer in age to the youths than adult educators. Director of Youth Ministry John Pratt helped hire the four young missionaries for this year’s program and will be supporting them in their work throughout the summer. He was thrilled to report that “all four are studying at Catholic universities, which is such a blessing for our diocese. They are folks with a heart for the Lord.”

He asked: “Pray for our missionaries,” as they are preparing to engage in what is “hard work.”

Pratt will experience the program himself for the first time this year. He expects it to benefit the diocese as well as the college students who will experience faith life in different areas and learn collaborative skills for their personal development. “I can’t wait to see how it all rolls out.”

Young men coming out of Mount St. Mary’s Seminary in Emmitsburg, Maryland, are learning about Totus Tuus from their fellow seminarians, particularly those from the Diocese of Peoria. Schleitwiler explained that seminarians in that diocese are required to complete a summer assignment with Totus Tuus, and they tell their classmates at the seminary about it. It has been met with enthusiasm by those in formation from the Diocese of Fort Wayne-South Bend.

They aren’t the only ones enthusiastic about it. Teen volunteers always seem to crop up when Schleitwiler asks for help. She shared how once they begin attending the evening program, teens will often come back to aid with the younger students during the day, even though that means they’re expected to arrive early in the morning.

Having younger people lead the program as well as volunteering to help makes a tremendous difference to the children going through it. Melissa Smith, parishioner at St. Jude and mother of four, three of whom have participated in years prior, is looking forward to another year of Totus Tuus. She is especially grateful for the college students who give of themselves to teach the young participants.

“I think the kids really liked it more because I think the closer age, instead of adults teaching things that they are just learning at that point. These kids, these teenagers that do this, have been trained to do this. And so, it makes it a definite step above a regular vacation Bible school.”

Her oldest will be in sixth grade this year, and Smith stated that Totus Tuus helps her daughter to engage with the Catholic faith.

“I think it goes back to the skits; they always have some kind of lesson or purpose, something that pertains to our Catholic faith. A lot of times it’s hard to get kids that age excited about it, because there’s so much they don’t understand.”

But when the missionaries are young enough to relate well to the students and make learning the faith fun and lively, that makes all the difference in the world. “It’s fulfilling seeing them get interested in their faith in creative ways,” Smith added.

Parish support is also necessary for the success of Totus Tuus. Schleitwiler estimates that around 25-40 parishioners volunteer to assist with the program. Two families host the team members for a week, one household for each gender; they provide sleeping quarters, bathroom facilities and a light breakfast. Five families host a dinner for the missionaries each night, while still others bring lunches during the day.

Schleitwiler would love to see St. Jude offer a parishwide potluck with the missionaries. All these methods of helping “gives more people in the parish a chance to understand what the missionaries do.”

According to Schleitwiler, additional parishes wanted to bring Totus Tuus to their area, but they had limited spaces. She is already looking to next year and an increased expansion of the program in the diocese, expecting that it may see enough growth to produce two teams. She also hopes to have at least one seminarian serve on next year’s team and help spread the word throughout parishes.