WASHINGTON (CNS) — Fifty years after the Rev. Martin Luther King Jr.’s assassination, “we need to ask ourselves if we are doing all we can to build the culture of love, respect and peace to which the Gospel calls us,” the U.S. bishops’ Administrative Committee said March 28.

On April 4, 1968, James Earl Ray gunned down the civil rights leader as he stood on the balcony of his hotel room in Memphis, Tennessee. Rev. King, a Baptist minister, was 39.

In reflecting on Rev. King’s life and work, “what are we being asked to do for the sake of our brother or sister who still suffers under the weight of racism?” the committee said in a statement. “Where could God use our efforts to help change the hearts of those who harbor racist thoughts or engage in racist actions?” 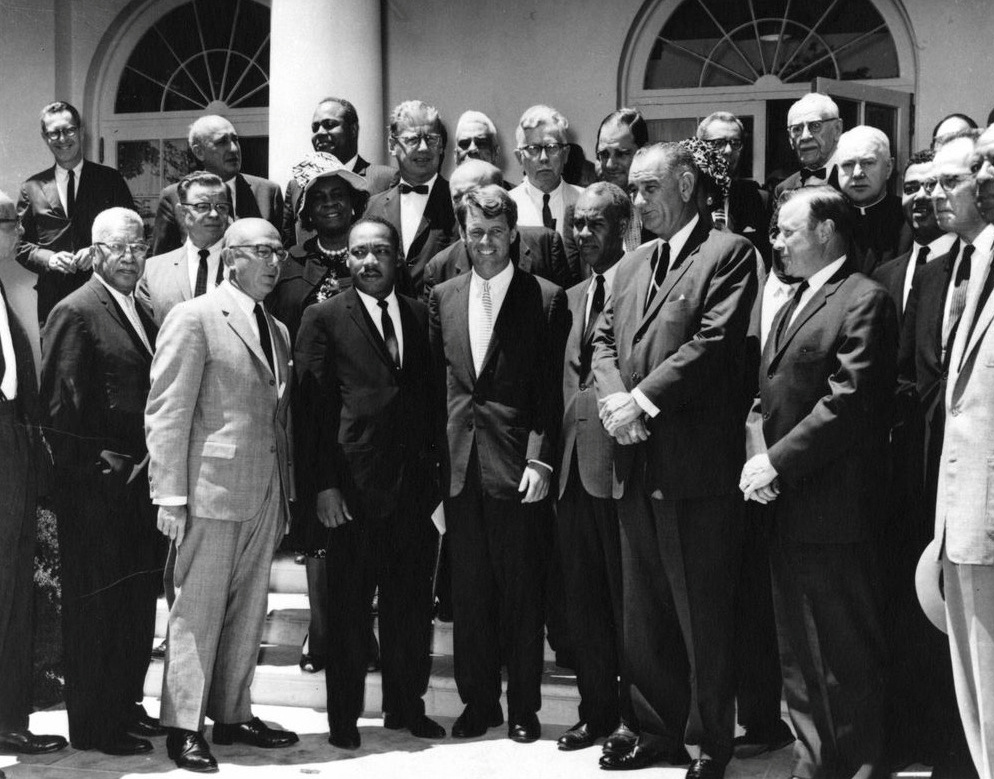 Robert F. Kennedy, center, poses with the Rev. Martin Luther King Jr., at Kennedy’s right, and other civil rights leaders in the Rose Garden of the White House in 1963. Fifty years after Rev. King’s assassination, “we need to ask ourselves if we are doing all we can to build the culture of love, respect and peace to which the Gospel calls us,” the U.S. bishops’ Administrative Committee said March 28. (CNS photo/Abbie Rowe, National Parks Service/JFK Presidential Library and Museum handout via Reuters)

This 50th anniversary “gives us an important moment to draw inspiration from the way in which Dr. King remained undeterred in his principle of nonviolent resistance, even in the face of years of ridicule, threats and violence for the cause of justice,” the committee said.

As the most prominent civil rights activist of his time, Rev. King fought for all races and against a system that promoted racism and racial divide. He is well-known for advocating nonviolence and civil disobedience to bring about change. He was inspired by his Christian beliefs and the nonviolent activism of Mahatma Gandhi.

In its statement, the Administrative Committee recalled that Rev. King went to Memphis to support underpaid and exploited African-American sanitation workers.

“(He) arrived on a plane that was under a bomb threat. He felt God had called him to solidarity with his brothers and sisters in need,” the committee said. “In his final speech on the night before he died, Dr. King openly referenced the many threats against him, and made clear that he would love a long life. But more important to him, he said, was his desire to simply do the will of God.”

“Our faith urges us to be courageous, to risk something of ourselves, in defending the dignity of our neighbor who is made in the image of God,” the committee continued. “Pope Francis reminds us often that we must never sit on the sidelines in the face of great evil or extreme need, even when danger surrounds us.”

Quoting Chapter 15, Verse 13, of St. John’s Gospel, the committee said: No one has greater love than this, to lay down one’s life for one’s friends.”

The best way to honor Rev. King “and preserve his legacy,” it added, is “by boldly asking God — today and always — to deepen our own commitment to follow his will wherever it leads in the cause of promoting justice.”

Rev. King’s assassination sparked a wave of rioting and other civil disturbances in cities across the country. Known as the Holy Week Uprising, it lasted from April 6 to April 14, which was Easter that year.