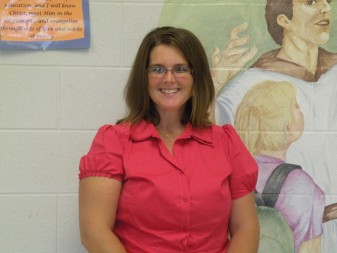 YODER — The German word, “wunderbar” (“wonderful”), could decribe Tina Voors’ excitement about being named principal of St. Aloysius School, Yoder. Voors, who had taught German for 18 years at DeKalb High School and was also a department chair there for six years, accepted the principalship at St. Aloysius on Aug. 9, just two weeks before the first day of school on Aug. 23.

In the last two weeks, the new principal busied herself with diocesan principals’ meetings, going through paperwork and meeting the staff and teachers at St. Aloysius School.

Voors will be working with a new pastor, Msgr. Bernard Galic, at St. Aloysius beginning Sept. 2. Msgr. Galic, along with current pastor Father Dominique Carboneau, were involved in the selection process of Voors.

Husband David Voors works the family farm and is an agricultural lending officer in New Haven. Both daughters are active in 4-H and recently showed six pigs at the Allen County Fair.

Voors converted to Catholicism in 1989 while a college student. She earned both her bachelor and master degrees from Indiana University-Purdue University at Fort Wayne (IPFW).

While serving as department chair at DeKalb High School, Voors became interested in administration. “I enjoyed that position (of department chair) and wanted to serve more than just my classroom,” she told Today’s Catholic.

Opportunity opened earlier this summer. “I had been online the day that this job was posted,” Voors said. “The diocese already had my application.”

She called Father Carboneau, and asked if she could have a tour of the school. “As a (volleyball) coach for the (CYO Twins), I had only been in the gym,” she noted.

“I think this was God’s plan,” she said. “He knows that I am very much a planner. I want to know where I am heading so I know what to do. … Looking back, I can see His hand working, creating this situation, so that this could happen. So the proverbial door closed, but He’s opened a huge gate — not just a window, not just a door — a huge gate.”

Voors’ philosophy on Catholic education is, “I truly believe that each person, not only students, but also teachers and staff, is a purposeful creation of God. And our task in a community of a school, a school setting, is to help each student figure out what are his or her gifts and talents and abilities and to increase those academic abilities so they can work morally and work well in this world.”

She said, “We’re in this world; we’re not of it. So they have to be able to go out and fulfill their calling that God has for them in the best way possible. And in this world, we need that knowledge and that intelligence.”

She continued, “We’re also all called to be saints. So the gifts and the talents that each person is given is unique. It’s a piece of the puzzle. And you take those gifts, talents and abilities, and you go out to your job, your calling and your purpose is to help others get to heaven, and to be helped by others.”

Voors said the strength of the school the staff at St. Aloysius is wonderful. “I love the whole feel. Everyone is like one big family,” Voors said. “I know that every family, each person, has a role to play … but I feel the support already. I feel the connectedness, the tradition, the history. If I may be so bold, I feel like I fit. The way that I feel and the way that I function, small is good. A small community is good.”

Voors is comfortable with the spiritual and educational pieces but is ready to tackle the administrative roles. One of those roles is marketing St. Aloysius School. “One of my biggest goals this year is to raise the enrollment,” she said, but she also shared she wanted to let the community know, “I’m here. I love it. And I’m going to stay, God willing.”

Voors, with a German language background, enjoys coordinating tours with groups of about 10 people to Germany, Switzerland and Austria.