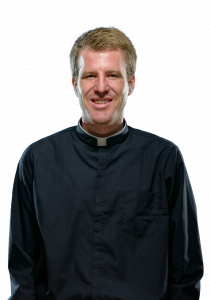 The path to the priesthood has been an international affair for Ryan Timossi. From West Coast to East Coast, from Italy to Guatemala, Timossi’s travels while discerning God’s call have covered the globe. Finally – and most unexpectedly – the Lord led him to the Diocese of Fort Wayne-South Bend, where Timossi is preparing to be ordained to the diaconate by Bishop Kevin C. Rhoades.

Timossi’s journey began in Orange County, California, where he was born and raised. His parents, who had met while attending Franciscan University of Steubenville, instilled the Catholic faith in him at an early age. However, by the time Timossi reached his junior year of high school, the “vanity and loneliness” of a worldly lifestyle had taken hold. That’s when he experienced a revelation.

“I just felt like, ‘What would life be like if I got rid of all the things that the Church teaches are grave sins? How would my life be better?’” recalled Timossi. “I felt a great amount of peace after having that thought and decided to give it a try.”

The first step for Timossi was to break free from sin and receive the sacrament of reconciliation. He also began to pray more, read the Bible and study the lives of the saints – particularly that of St. Padre Pio. In fact, Timossi began to adopt the Italian saint’s proclivity for fasting. “I must admit I was a little extreme in the way that I fasted sometimes,” Timossi confessed with a laugh, referencing his mother’s concerns that he was losing too much weight.

Although his conversion of heart didn’t happen overnight, Timossi refused to be discouraged. He discovered a monastery of Norbertine fathers down the road from his house, and through their acquaintance, Timossi began to receive spiritual direction. He also found a group of friends with whom he would pray and give witness outside abortion clinics every Saturday.

One of his friends entered the Franciscans of the Immaculate and lived a lifestyle similar to St. Padre Pio’s. This appealed to Timossi, who decided to join the Franciscans in upstate New York. After spending his novitiate in Connecticut, Timossi felt the Lord calling him to study for the priesthood, and he was sent to the Franciscan’s seminary in northern Italy. This gave him the opportunity to visit Padre Pio’s birthplace in Pietrelcina, as well as San Giovanni Rotondo, where Pio lived as a friar and where his body remains on display.

“It was a great experience to walk in his footsteps,” said Timossi.” I really felt his presence very strongly in the beginning of my conversion, and I always kind of sought that tangible presence that I felt with him throughout my walk.”

However, Timossi’s stay in Italy was short-lived. The Vatican decided to close the seminary and send its attendees to Rome to study at a pontifical university. Pope Francis himself met with Timossi and about 50 fellow seminarians in a private chapel for an hour and forty-five minutes to discuss the move.

“He was very fatherly, just trying to encourage us not to abandon the community,” said Timossi. “He showed a great paternal solicitude for how we were doing and a great appreciation for the charism of the community.”

Despite the pope’s encouragement, Timossi did not find the stability he was searching for in that community. He discerned out and returned to California, where he decided to continue the Franciscan way of life. He recalled meeting the Franciscan Friars Minor of Fort Wayne while in New York, but even though one of his friends had already joined, Timossi had reservations: “I had told them that I wasn’t interested in joining a barefooted community.” Nevertheless, he decided to make a visit to Fort Wayne and was won over.

Once again, divine providence would shift the direction of Timossi’s journey, as the religious order disbanded in 2020. He then had to discern if he still felt called to the priesthood. It was at this point that he began to consider serving at the diocesan level.

“I felt like the diocesan priesthood would give me that stability that I really longed for,” said Timossi. “The question remained whether or not to go home to Orange County and join that diocese or to remain in Fort Wayne,” where he had lived for more than three years. After months of discernment, Timossi felt the Lord calling him to Fort Wayne – a decision that his parents in California fully supported.

“When they found out about my discernment, they were very supportive and excited at what the Lord had in store for me,” he said. “They felt it was the right decision, even though it would mean me being farther from them.”

Timossi has made the most of his time at Mount St. Mary’s Seminary in Cincinnati. Last summer, he was able to travel with some of his classmates to Guatemala, where he learned Spanish and developed a deep appreciation of how Guatemalans celebrated the feast days of the Church.

“The amazing amount of faith that they had was very edifying for me,” said Timossi. “It just made me feel like what I do for the Lord is very little comparatively.”

After almost a dozen years of priestly formation, Timossi is now on the verge of fulfilling the Lord’s plan for his life. Bishop Rhoades is set to ordain Timossi and four others to the Sacred Order of Deacon on May 21 at St. Matthew Cathedral in South Bend. While Timossi anticipates the challenges of diocesan priesthood ahead – such as being disciplined for prayer, using his freedom wisely and, yes, waking up on time – he does so with the peace of knowing he’s exactly where is his supposed to be.

In his own words: “I’ve landed finally.”