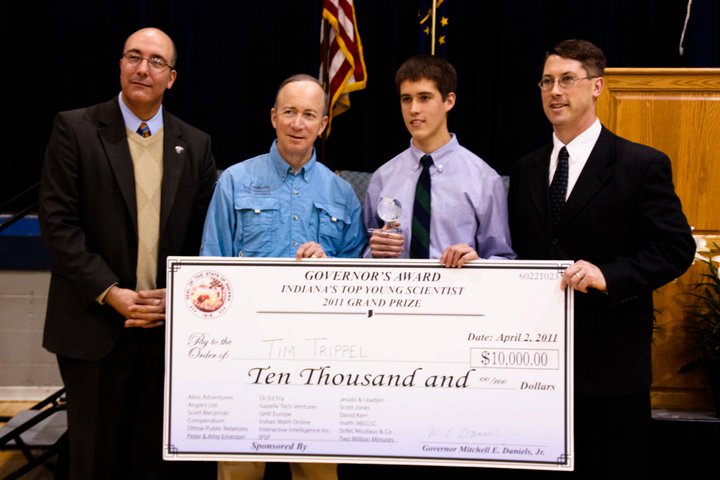 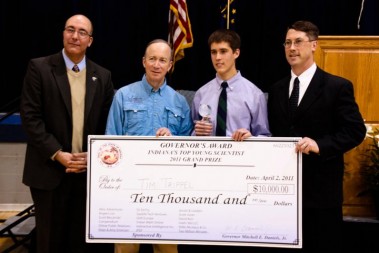 Tim Trippel of Marian High School was recently named the recipient of the Governor’s Award for the Top Young Scientist in the State. Trippel, who will attend Purdue University next fall, received a $10,000 cash award, believed to be the largest award of its kind nationwide. At the presentation of the award on April 21 at Marian High School, from left are Mishawaka Mayor Dave Wood, Indiana Gov. Mitch Daniels, senior Tim Trippel and Marian High School Principal Carl Loesch.

MISHAWAKA — Marian High School senior Tim Trippel of Mishawaka was recently honored by Superintendent of Public Education Dr. Tony Bennett with the presentation of Indiana’s 2011 Top Young Scientist. The honor carries a $10,000 cash award, believed to be the largest award of its kind nationwide. And Indiana Gov. Mitch Daniels visited Marian High School April 21 to present the award to Trippel.

The son of Terrence and Christine Trippel of Mishawaka, Trippel was named this year’s Top Young Scientist at the 23rd Annual Hoosier Science and Engineering Fair held in Bloomington on April 2. Trippel’s project was titled “Development of a Low-Cost Electroporator for High School and Developing World Applications.”

His research project was developing a very low-cost method of introducing DNA into bacterial organisms. Normally the piece of equipment that would be used for this would cost tens of thousands of dollars, but Trippel made the device functional for a cost of only $25.

Trippel received a trophy and check for being judged the highest placing senior among the state’s top science and engineering competitors. Trippel plans to attend Purdue University.

“Tim and students who competed today are the real heroes among their peers. They will be the future leaders and thinkers of our nation,” Bennett said. “Just like his parents, teachers and community, I’m incredibly proud of Tim’s work, and I know today’s achievement is just one of many milestones in what is sure to be an outstanding college and professional career.”

Gov. Mitch Daniels established the award in 2009 as a part of his continued commitment to improve Indiana education and to highlight the importance of science, technology, engineering and mathematics (STEM). Nearly 22,000 students in grades 1-12 participated in a local science fair this academic year.

More than 3,700 of those students participated in regional science fairs, and the top 100 students in grades 9-12 earned a chance to compete at the Hoosier Science and Engineering Fair hosted by the Science Education Foundation of Indiana (SEFI).

All projects are judged by a panel of Indiana scientists on the basis of creative ability, scientific thought, engineering goals, skill and clarity.

Trippel has also been selected to participate in the Intel International Science and Engineering Fair in Los Angeles, Calif., this month.

In addition to work with SEFI, Dr. Bennett and the Indiana Department of Education (IDOE) have made STEM education a priority by partnering with organizations (the I-STEM Resource Network, Lilly and BioCrossroads) for the Indiana Science Initiative, which promotes and supports inquiry-based science instruction in classrooms across Indiana.