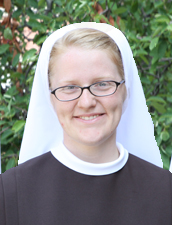 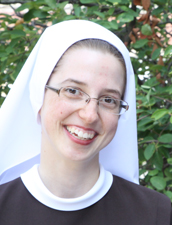 MISHAWAKA — According to the Sisters of St. Francis of Perpetual Adoration, on Aug. 10, six young women were admitted to the novitiate after completing a year of postulancy. During the investiture ceremony the postulants were robed in the habit and white veil and presented with their new religious names. Three of the six novices hail from the Diocese of Fort Wayne-South Bend and are embracing religious life with zeal.

Kim Davis, now known as Sister Mary Bosco, is one of four children of Philip and Susan Davis and is from Ossian, where she was a parishioner of St. Therese Parish. She admits that she first heard the call to religious life as she prepared for her first Communion, and though she met the Sisters of St. Francis of Perpetual Adoration at Bishop Luers High School during a vocation event in her sophomore year, she still felt reluctant to join. After a year of college and part-time work and another year of discernment Davis asked to be a member of the community.

Sister Mary Bosco says she was drawn to the Sisters of St. Francis of Perpetual Adoration for several reasons. “I love the simplicity and Gospel way of life of St. Francis,” she says, adding the fact that they wear habits, a reminder of their consecration, inspired her.

Celeste Warrell, known as Sister Mary Augustine, comes from St. John the Baptist Parish, South Bend. The second oldest of the eight children of Dr. Gerald and Michele, Warrell was home schooled through high school and graduated from Indiana University South Bend with a bachelor’s degree in biochemistry, and then obtained a master’s degree in biochemistry and molecular biology from Michigan State University. She first thought of religious life in early grade school, reading the lives of the saints in children’s books. 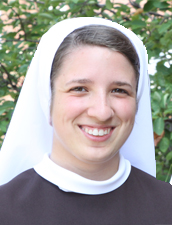 After meeting the Sisters of St. Francis of Perpetual Adoration at retreats at their Mishawaka motherhouse, Warrell spent the years of her higher education in discernment. She says, “A year into the Ph.D. program, everything was going great ­— except for the gnawing restlessness and emptiness in my heart. At the same time, the thought of being a religious sister came back!”

Sister Augustine feels she has grown in faith during her year of postulancy and says, “I have especially learned to grow in trust in God. ‘Letting go and letting God take over’ is not a one-time event. It doesn’t stop after the recognition of my vocation. … Rather, trust in God calls for a daily surrender of ourselves, our time, our sense of and desire ‘to be in control.’”

The third novice, Janet Hilger, now known as Sister Michael Marie, is from Fort Wayne, one of 12 children of Joseph and Elaine Hilger. She attended Queen of Angels Parish, where she also received her elementary education. Hilger became acquainted with the Sisters of St. Francis of Perpetual Adoration when they came to Bishop Dwenger High School, where she was a student, for Vocation Days from which her interest in religious life was sparked.

As Hilger’s interest in religious life grew she narrowed her search down to congregations that were loyal to the Catholic Church “with a contemplative/active apostolate.”

All three of the novices agree wholeheartedly that their parents’ example of holiness and fidelity to their own vocations nurtured their own vocation to religious life. And all three agree that they were drawn to the Sisters of St. Francis of Perpetual Adoration charism of Eucharistic Adoration and their spirit of true joy. Ultimately all three of these inspired women feel a sense of peace and of being at home in the congregation.

As for spreading the word on vocations, in addition to participating in vocations events at high schools and parishes as well as discernment retreats, all agree with Sister Mary Bosco who feels that just being present and witnessing the love of Christ will encourage others. “We can strongly encourage vocations by sharing Christ’s love with everyone we meet through the simplest, every day actions, from spending time in prayer with them to playing games,” she says.

Sister Michael Marie adds, “A novice or professed sister can encourage vocations simply be being a witness and wearing the habit. You might be surprised how much the habit attracts attention. People watch your example and it can certainly be a conversation starter.”

Sister Mary Bosco concludes, “I have always dreamed of adventure, of going to far off countries, making a name for myself, and living a comfortable life. But now I’m beginning to understand that real adventure is not travelling about the world, but, instead, travelling into the hearts of everyone we meet. Real adventure is love, and I want to live the most adventurous life possible. Do not be afraid to follow the Holy Spirit.”