As the Easter season drew to a close, the joy of the Resurrection continued in the priestly ordination of three men on Saturday, June 4, at the Cathedral of the Immaculate Conception in Fort Wayne. Surrounded by family members, friends and fellow priests, Deacon LeeAllen Fortin, Deacon Brian Isenbarger and Deacon Mark Hellinger were ordained to the priesthood by Bishop Kevin C. Rhoades.

Click here for more photos from the ordination by John Martin

Click here for more photos from the ordination by Jennifer Barton

Bishop Rhoades’ homily focused on the Gospel reading from John, the story of the Good Shepherd. Appropriately, he spoke of Pentecost and the coming of the Holy Spirit upon the Apostles. “Today, these three young men will be marvelously endowed with the same Holy Spirit. Through the laying on of hands and the prayer of ordination, they will be consecrated by the Holy Spirit and united to our crucified and risen Lord in a new and radical way: they will be united to Christ the Good Shepherd, who laid down His life for the sheep.”

“All of us priests (and bishop) are called to live our consecration and our mission in the Church coherently. It’s incoherent if we act like hirelings, rather than shepherds.” 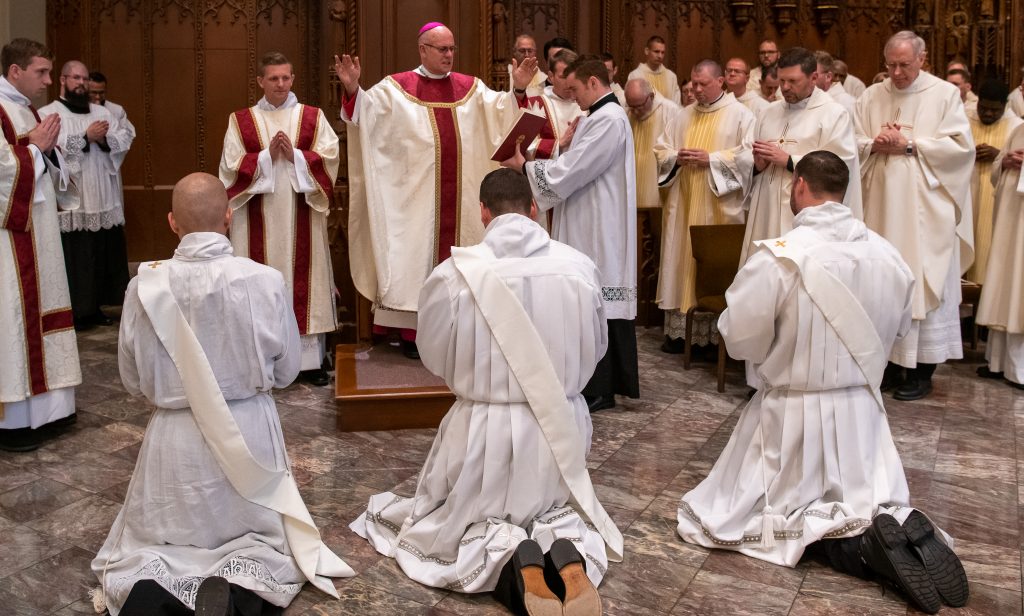 He went on to explain the difference between a hireling and a true shepherd. “The good shepherd protects the flock. He’s vigilant against the threat of doctrinal errors that lead souls astray, into sadness and division. The hireling could not care less. He ‘sees a wolf coming and leaves the sheep and runs away.’ The good shepherd provides for the flock, nourishing people with the Church’s doctrine, sacraments and liturgy. The hireling is careless about the Church’s teaching and liturgy, leaving the flock hungry and malnourished. 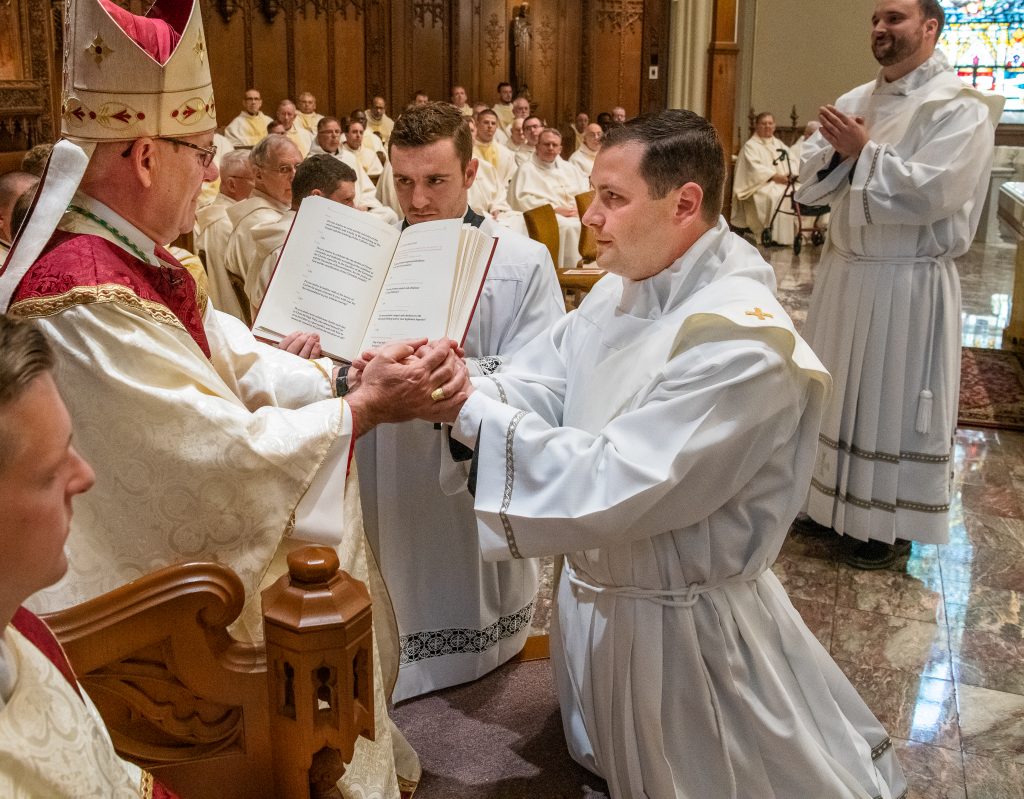 John Martin
Father Mark Hellinger promises to fill his priestly duties and to be faithful to the bishop and his successors.

John Martin
Bishop Rhoades anoints Father Brian Isenbarger’s hands with chrism, a sign of the sacred duties of a priest. 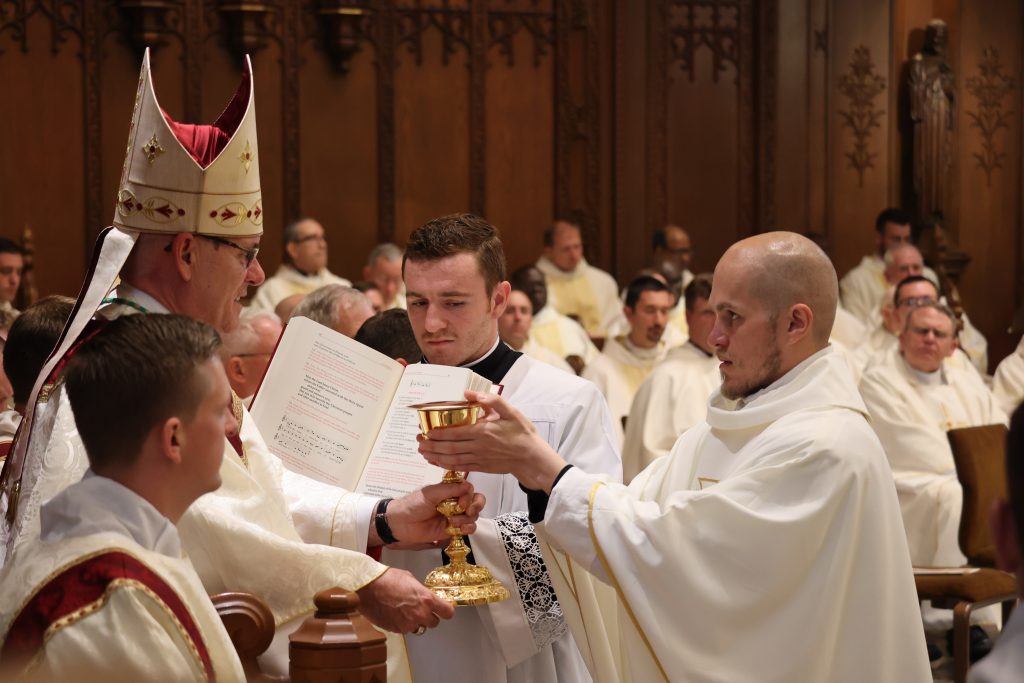 Jennifer Barton
During the ordination Mass, Father LeeAllen Fortin accepts the paten and chalice from Bishop Kevin C. Rhoades, demonstrating the eucharistic ministry of his priesthood.

He concluded his words to the priestly candidates by saying, “My sons, I pray that you allow the energy of Christ the Good Shepherd to seize your whole being. This means total surrender to the exigencies of the mission. In a word, it means laying down your lives for the sheep.”

Thus, the three men did so symbolically, laying facedown before the altar during the Litany of Supplication. Then each candidate knelt as the bishop and the entire body of priests laid their hands on their heads. With the prayer of ordination spoken by the bishop, they were officially received into the sacred order of the priesthood. To symbolize this transition, the three men were vested with a priestly stole and chasuble. 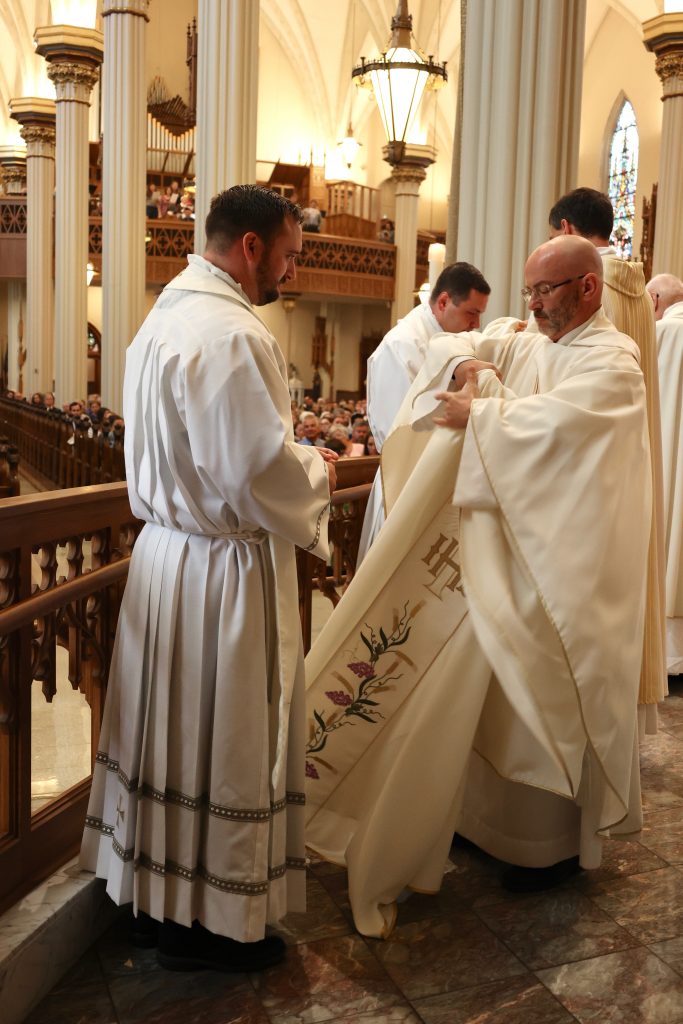 After this, Bishop Rhoades anointed the new priests’ hands with sacred chrism. According to the USCCB website, this is done to signify the sacred duties of a priest; namely, consecrating the Eucharist, anointing the sick and bestowing blessings upon the faithful. As the Eucharist is the heart of a priest’s ministry, the newly ordained were then presented with a paten and chalice before being welcomed into the priestly life through the kiss of peace, bestowed again by Bishop Rhoades and all priests present. Then Fathers Fortin, Isenbarger and Hellinger joined their fellow priests behind the altar, taking part in concelebrating the Mass for the first time in their priestly lives.

On the cathedral plaza after Mass, it was Bishop Rhoades’ turn to kneel before the new priests as one by one, each of them bestowed their first priestly blessing upon him, after which he kissed the hands that he had so recently anointed with chrism. 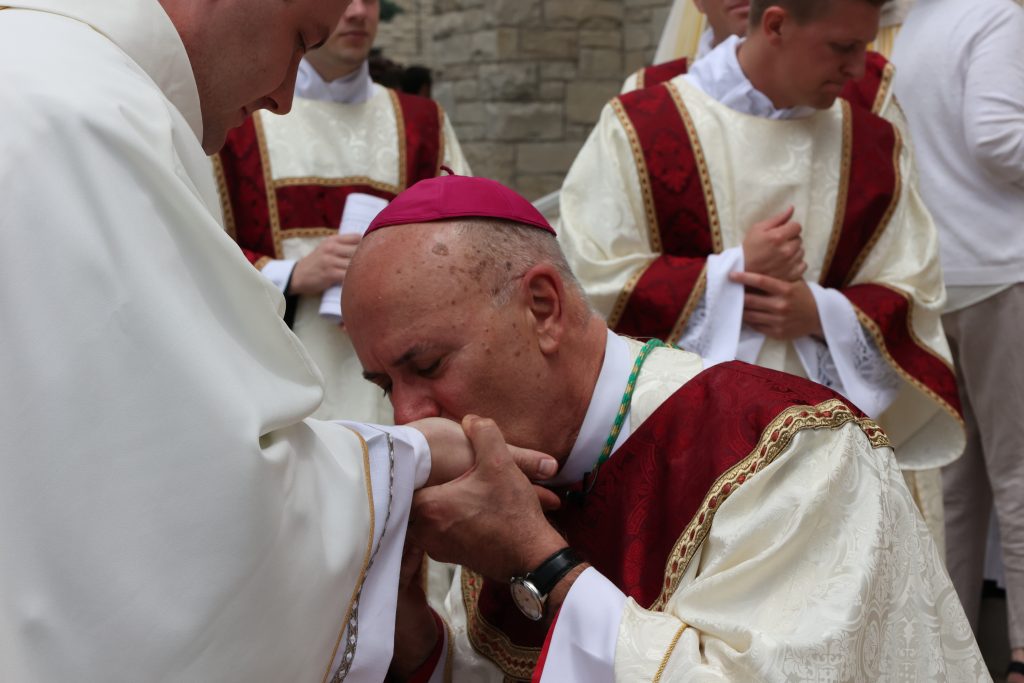 Jennifer Barton
After the Mass, the three new priests bless Bishop Rhoades and he kissed each of their hands.

In the course of the ordination, Father Hellinger was overcome with emotion. He explained afterward that “I tend to cry a lot in the face of beauty” and stated that he was “reflecting on what it means to be a priest in terms of bishop’s homily, kind of pouring myself out for the people of this diocese.” He will be doing so through the summer at St. Anthony of Padua in Angola and St. Joseph, LaGrange before returning to Rome to complete his degree.

Additionally, he thought of his father, also named Mark, who passed away the summer before his ordination to the diaconate last year. “I was thinking of him, several other family members who passed away and just being also surrounded by the living family members in the cathedral, lots of friends. It was just years of various people who had supported me and helped raised me, basically, so seeing that both on earth and in heaven.”

Father Fortin’s family came from South Dakota to witness the event. He recalled how he felt during the ordination, particularly at the words spoken by Bishop Rhoades. “He looked at me when he said, ‘living waters of the Holy Spirit’ – that’s a major theme in my spiritual life – as well as the last words of his homily, when he spoke of the surrender it takes to be a priest.” Father Fortin has been assigned to St. Mary of the Assumption in Decatur.

For his part, Father Isenbarger confessed that “I was more nervous last year than this year.” At the end of the ceremony, he said he felt “Extraordinary. Joyful. It’s exactly where I’m supposed to be. It’s great.”

More than anything, he professed himself ready to finally take on the role that God has called him to – shepherding God’s children, now his children. He will begin his priestly ministry as Parochial Vicar of St. Vincent de Paul Parish in Fort Wayne.