VATICAN CITY (CNS) — A quiet hush covered the vast expanse of St. Peter’s Square even though it was filled with thousands of people slowly winding their way around the colonnade into St. Peter’s Basilica to pay their last respects to the late Pope Benedict XVI.

Outdoor souvenir sellers were well-stocked with rosaries on Jan. 2, but they seemed to have been caught off guard with a plethora of touristy tchotchkes and few to no images or mementos of the late pope.

A damp chill hung in the air at 9 in the morning when the doors of the basilica opened to the public on the first of three days to view the pope’s body.

Special accommodations, however, were made for officials of the Roman Curia, Vatican staff, and dignitaries who were allowed access from the back of the basilica and offered a place to sit or kneel on either side of the pope’s body, which was laid out in red vestments on a damask-covered platform. 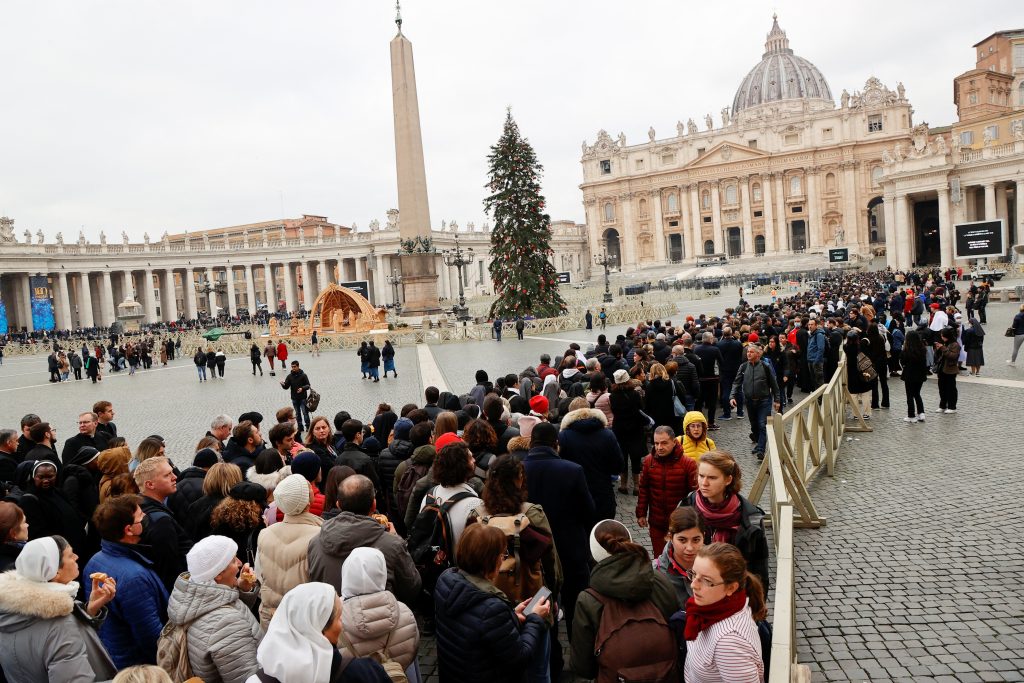 Before the doors opened to the general public, Cardinal Mauro Gambetti, Archpriest of the Basilica and Papal Vicar for Vatican City State, accompanied Italian President Sergio Mattarella and his entourage and Italian Prime Minister Giorgia Meloni and other government ministers to pay homage to the late pope.

The first in line outside the basilica was a group of religious sisters from the Philippines, who said they got there at 5:30 a.m.

People kept slowly arriving before sunrise, including a group from Duluth, Minnesota, and Superior, Wisconsin, led by Father Richard Kunst of Duluth. The priest told Catholic News Service that he was leading a tour of Rome the day Pope Benedict died.

Being able to see and pay homage to the late pope made the group part of “a really incredible piece of history,” he said.

Father Kunst said he was “a big fan” of Pope Benedict and “not sad at his passing” since the 95-year-old pope had lived a long life and “this is what he lived for — to be able to be with God.”

Father Felipe de Jesús Sánchez, who is from Mexico and is studying in Rome, told CNS that he saw Pope Benedict as “a simple man, humble, a model, who didn’t have as much fame as John Paul II, but he was the mind behind him.”

“For me, in my personal opinion, he was an authentic testimony of what it means to be Christian and a disciple of Jesus,” he said.

Father Matthew Schmitz was with a group of 90 young people from ECYD, an international Catholic youth organization affiliated with Regnum Christi.

“We were praying while we were waiting, we prayed the rosary” and went inside the basilica in silence, he told CNS.

He said he was in Rome for his studies when Pope Benedict was elected in 2005, and “I met him once after an Easter Mass,” which means “I’m still kind of processing” the fact that he found himself back in Rome when the pope died.

Daniela Romero, a member of the group from Guatemala, said, “to be able to come here and see that we are representing and supporting the church is a blessing.”

Father Justin Kizewski happened to be traveling with a group of 45 seminarians and nine priests on pilgrimage from Madison, Wisconsin.

“When we read his writings, or heard him preach, or saw him celebrate the Mass, we really saw a man who cares for his sheep and gives us an example of how to care for ours,” he said.

Hannah O’Connor from Rhode Island credits Pope Benedict as being instrumental in her conversion during college, where “we read a lot of Ratzinger.”

His writings and pontificate were “an important part of my journey,” she said, and “I hope that people keep encountering his works and are brought to the one Church through beauty, that’s what really drew me in.”

Sugey Viramontes from Mexico told CNS that, “without a doubt, his example of simplicity, and above all how he spent his last few years, always in prayer, is a great example for us young people.”

Inside the basilica, staff and security kept visitors moving smoothly and quickly, letting people stop before the pope’s remains long enough to make the sign of the cross and take a picture or two before being asked quietly to “Please, move along.”

However, many took advantage of the large nooks and niches in the basilica to press up against a wall or barricade and linger just a little while longer.

Pope Benedict’s mortal remains were to lie in repose in the basilica for three days until the late evening of Jan. 4; Pope Francis was scheduled to preside over the funeral Mass on Jan. 5.