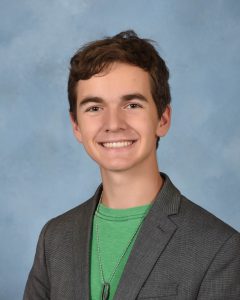 Elkhart Central valedictorian Thomas Coates knows it’s not always easy to be a Catholic in a public high school. In a way, the role his faith has played in his high school experience and personal formation is more obvious to him precisely because he is in an environment, day in and day out, in which most of his peers do not share his beliefs.

“I pray every day before breakfast and lunch, and I’m kind of known for being well-mannered and not swearing. I’ve been lucky enough to grow up knowing to resist the temptations of drinking and smoking and instead focus on forming healthy friendships and developing strong study habits. Thanks to my faith, I’ve become the person I am today.”

Like most teenagers with high academic achievements, Coates has been very busy these last four years. His extracurricular involvement included mostly musical endeavors; marching band for four years, including being on the leadership team his junior and senior years and serving as captain of the front ensemble as an upperclassman; participating in Winter Percussion band his sophomore through senior years and captain of the Front Ensemble as an upperclassman; and participating in Blazeline and Symphony Orchestra his junior and senior years. He also was inducted into the National Honor Society as a senior, the same year he was a Rotary Guest Student; he was a Boy Scout all four years and Patrol Leader of Pack 750 as a freshman; and he participated in the youth group at his parish, St. Thomas the Apostle, Elkhart, all four years.

Coates’ pastimes are mostly quiet activities, since he spends his days busy with school and music. He likes to draw in his notepad, which he carries with him everywhere, or jot down inspired thoughts and ideas. He also values the supportive friendships he has forged, noting that “I’m fortunate to have found a wonderful group of honest, kind people who hold similar values as I do — a rare trait in a public school.”

Coates plans to pursue a degree in computer science at the University of Notre Dame this fall.