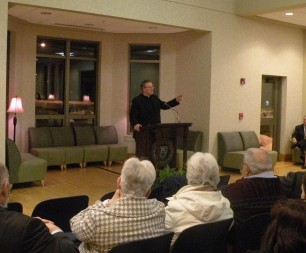 NOTRE DAME — The only “multimedia star” recognized as an authority on St. Thomas Aquinas spoke at Saint Mary’s College the evening of Jan. 25 on “Thomas Aquinas and why the atheists are right.”
Father Robert Barron, whose Word on Fire Catholic Ministries reaches millions of people through television, radio and the Internet, was the guest speaker for the Saint Mary’s 14th Annual Symposium on Saint Thomas Aquinas. Father Barron, a priest of the Archdiocese of Chicago, also is the author of several books, essays and DVDs and holds the Francis Cardinal George Chair of Faith and Culture at the University of St. Mary of the Lake/Mundelein Seminary.

Professor Joseph Incandela, the Joyce McMahon Hank Aquinas Chair in Catholic Theology at Saint Mary’s, introduced Father Barron and gave him that “multimedia star” title, which resonated with the 100-plus people who filled the Saint Mary’s Student Center Lounge for the 7 p.m. lecture.

Father Barron explained that he meant for the title of his lecture to be “provocative.” He referred to the technique used by the Dominican theologian Father Vincent McNabb (1868-1943) in engaging atheists. When one of his students at Oxford would profess disbelief in God, Father McNabb would ask the student what he meant by God. After the student gave his ideas, Father McNabb would respond: “I don’t believe in that God, either.”

Like Father McNabb, Father Barron said he also finds that atheists help us both spiritually and theologically “to clarify what the true God is not.” The atheists’ idea of God usually is made in the image of human beings, what the Bible would call “idolatry,” he said.

Atheists often conceive of the God of believers as a vengeful being who competes with His creatures, watches the world from the outside and imposes His rules on human freedom, much like the mythological king of the gods, Zeus, Father Barron said. He also compared this concept of God to that of a dictator like Kim Jong Il presiding over North Korea with an iron fist.
That image of God is like idolatry and has “deeply disturbing implications for humanity,” Father Barron said, for it leads the atheist to reason: “If God exists, I cannot be free. But I am free; therefore, God does not exist.”

Thus, the so-called “new atheists” like Christopher Hitchens and Richard Dawkins tend to see religion and political totalitarianism as closely aligned, he said, particularly since the terrorist acts of Sept. 11, 2001. The only thing new about new atheism, he said, is its “nastiness” and “dismissive contempt for religion and religious people.”

Thomas Aquinas, however, is particularly enlightening when dealing with atheists because in some of his writing, he also tries to understand more about God by examining what God is not, Father Barron said.

First of all, Aquinas saw a “radicality of difference” between God and what He made, he continued, for God, the source of all existence, cannot be placed in any genus or category of being and cannot be compared to His creatures, as atheists are wont to do.

“God is never reduceable to the level of a creaturely agent; He can never, even in principle, become the object of an empirical scientific investigation; He could never be defined or categorized by an inquiring mind,” Father Barron said.

Aquinas sees God as creator who creates from nothing. And in creating, God doesn’t affect preexisting reality in some accidental way. Rather, Father Barron said, “He brings the whole of that reality into being.”

And why did God create? Certainly not to compete with His creatures or impose His will on them.

“God’s creation is an expression of love,” Father Barron said. “God doesn’t push or pull human wills from the outside as much as he energizes them from the inside,” without compromising human freedom or free will. Indeed, God interacts, but does not interfere, he said.

Father Barron observed that since the Second Vatican Council (1962-1965), the Church has been “inept” at presenting its theology of God. And since Sept. 11, 2001, the “new atheists” have become more aggressive against religion, portraying religion as dangerous.

The Aquinas Symposium takes place annually on or around the saint’s feast day of Jan. 28 and is sponsored by the Joyce McMahon Aquinas Chair in Catholic Theology at Saint Mary’s.