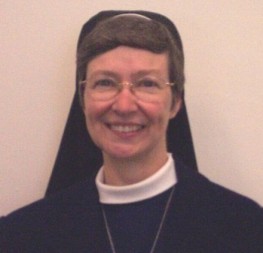 Sister John Sheila Galligan, a sister of the Servants of the Immaculate Heart of Mary who currently serves as professor in the department of theology at Immaculata University in Pennsylvania, will be one of the speakers on the topic of forgiveness at the Arise Women’s Conference to be held Sept. 24 from 9 a.m. to 4 p.m. at the Allen County War Memorial Coliseum, in Fort Wayne. Registration begins Aug. 1 and runs through Sept. 16.

FORT WAYNE — Women of the Diocese of Fort Wayne-South Bend will have the opportunity to delve deeply into the complex topic of forgiveness at the third annual Arise Women’s Conference on Sept. 24 from 9 a.m. to 4 p.m. at the Allen County War Memorial Coliseum-Expo II, in Fort Wayne. Bishop Kevin C. Rhoades will celebrate a special Mass at 9:30 a.m. with the conference attendees.

The conference titled “Offer Forgiveness and Receive Peace,” will springboard from last year’s theme, which focused on the dignity, strength and hope of women, says Natalie Kohrman, director of the Office of Spiritual Development and Evangelization.

“We are building on last year’s theme by highlighting how women — made in the image and likeness of God — are called to forgive as our heavenly Father forgives,” Kohrman says.

She is pleased with the speaker lineup and says, “Sister John Sheila Galligan teaches a university course on forgiveness. Her course title is ‘Forgiveness: the Best Revenge.’

“The title speaks to many because we incorrectly assume that revenge will make us feel better, but it doesn’t. … It takes courage and strength to forgive, and as women — as mothers, wives, daughters, coworkers — we need to model that for the culture,” Kohrman adds.

Immaculee Ilibagiza, survivor of the 1994 Rwandan genocide and author of “Left to Tell,” will also speak at the conference.

Sister Galligan is a sister of the Servants of the Immaculate Heart of Mary and currently serves as  professor in the department of theology at Immaculata University in Pennsylvania. Born into a Catholic military family, the sister has traveled extensively and lived in exotic countries all over the world.

She has a doctorate in theology from the University of St. Thomas in Rome and her passion lies in education. She has taught at the elementary, high school and college level for many years.

This well versed, exuberant sister has a heart, not only for education, but also for the truth of the Catholic faith and life, especially of the young.

“I love our young people,” she says. “When truth is presented with clarity and with a smile … I find a great receptivity.”

Sister Galligan’s interest in forgiveness stems from a challenge her own students charged her with some time ago. Forgiveness became the subject of interest one class period and her students asked for an entire course on the topic.

Sister Galligan readily accepted the challenge and designed a course that continues to transform lives at the university. The development of the class and its subsequent success led the sister to speak on forgiveness using the tools she researched for her students.

Sister Galligan hopes to educate the women of the diocese on the distinction between secular and Christian forgiveness, offering what she has discovered in the psychological realm as well as the faith realm. Both realms converge to “move through the process” of forgiveness.

Secular forgiveness focuses only on letting go — “It’s all ‘I’,” says the sister. The goal of Christian forgiveness, she adds, is always to be prepared to decide to offer the gift of forgiveness, with the help of grace.

“We forgive when we are called for the good of the other. We have compassion for the other’s sin. If they don’t accept the gift of forgiveness, in the end, I am relieved of the inner toxin — I am free,” Sister Galligan says.

Steps of the process will be defined as Sister Galligan offers the tools of Christian forgiveness to the women in attendance, including a “Blessing Prayer” used to bless the enemy, says Sister Galligan.

“I ask God to bless my enemy. I don’t ask Him to change them,” she says.

The women will learn the meaning of each petition within the prayer and come to know the change in their own thinking about forgiveness.

Sister Galligan is especially excited to be juxtaposed with her friend Immaculee Ilibagiza, who she says will give a perfect witness to her own teaching on forgiveness, and is grateful for the forum in which so many women may gather.

“There is a need to gather as community. God’s grace always is at work,” she says.

With enthusiasm, she hopes the women in attendance will receive new insights, and inspiration so they can identify with Jesus Christ and live out the message of forgiveness.

“I encourage people to come. We live in a world where forgiveness is needed. No matter who you are, this is a practical and applicable conference. It’s not just for you — but for those in the world,” she urges.

Registration begins Aug. 1 and runs through Sept. 16. The cost, which includes lunch, is $35 per person. The parking fee is $4. For more information contact Mary at (260) 399-1447 or visit www.diocesefwsb.org/arise. The conference is sponsored by the Office of Spiritual Development and Evangelization and cosponsored by Redeemer Radio AM 1450.