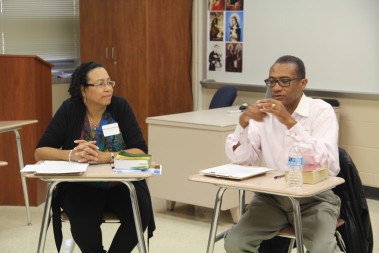 Tim Johnson
Wendy and James Summers share their journey of faith in the session, “One Body, One Family: The Value of Diversity and Inclusion” at the ZEAL Missionary Discipleship Summit at Bishop Dwenger High School in Fort Wayne on Oct. 10.

FORT WAYNE — James and Wendy Summers are in love with their Catholic faith. Active members of St. Pius X Parish in Granger, the Summers are eager to share this love of the faith with those they encounter. And they want others to reach out in the spirit of inclusion.

James recently expressed in a session at the ZEAL, Missionary Discipleship Summit on Oct. 10, that many are surprised to learn that the faith-filled Summers are Catholic.

James works with a lot of companies as it relates to diversity and inclusion. In the community, he often works with community engagement with many African-American pastors, and he often is asked, “You’re Catholic?”

What it represents, James said, is “I’m not what they thought Catholics were like.”

“It’s all about relationships,” James noted. “It’s not what we say. It’s not what we preach at people. It’s not that we try to convert people. It’s very much a matter that we show faith in our actions and then people themselves turn around and say, ‘I want what you’ve got. I want to understand what makes you be that way.’ And then they want to be engaged.”

James and Wendy Summers shared what is like for them to be a minority — Black Catholics — in the Catholic Church, and shared just a few simple steps to make all feel welcomed and included in their parish communities and the faith.

In sharing his story, James grew up in Evanston, Illinois. His mother’s family had been Catholic for multiple generations. His father was Episcopalian and converted to Catholicism.

In sharing her story, Wendy used a quote from Sister Theo Bowman: “I am authentically Black, and I am truly Catholic.” In the community where Wendy grew up, people often did not believe those two things could be one and the same.

“The foundation of my spiritual formation,” she said, “probably started in 1780. My grandmother’s family was brought here from Haiti to New Orleans — a very Catholic city.”

Wendy has 10 well-documented generations of Catholicism. “My grandmother made sure that we knew that we were Catholic,” Wendy noted. “That was important. It was something to be proud of.”

James grew up in a predominantly white parish in Evanston, Illinois. He was one of the few African-Americans students who attended the Catholic school there.

He said he often felt like a token, “and it was really quite uncomfortable in a lot of different ways,” he said.

In one instance, during integration, James was sent for one day to another all-white school, which was thinking about allowing some Black families in, but they weren’t quite sure. “I was going to show that the world wouldn’t end if you had a Black family come in,” James said. His mother was outraged, but his father saw it as an opportunity “to be a bit of an ambassador.”

“It left that sense in me that I’m being used. I’m not really a part of the faith here,” James noted.

Through high school, James was feeling less engaged with his faith. “I still believed,” he said, but attended church, “when I really felt like I needed a bit of a sanctuary, where I needed a safe place, where I needed some place where I could sit back quietly and weather some turbulent times.”

Wendy grew up in a depressed all-Black community in the Chicago area, but her family lived in a very middle class neighborhood. There were a lot of Catholics in the middle class, she noted. Wendy and her four siblings attended Catholic schools for 12 years.

“Our time in Catholic school was very different,” Wendy noted. She spoke of how the older sisters at her elementary school seemed angry and often called the Black students “you people,” and how it built a level of disengagement with her faith.

Wendy attended an all-white Catholic high school on the far south side of Chicago, but again felt unwelcomed. Grown men would chase the Black students to the bus with rakes and bats. “They didn’t want us in their neighborhood,” Wendy said. “There was nothing there that made me feel value in being there. I didn’t feel wanted.”

While in high school, Wendy didn’t go to church often. “But I would go to church whenever my father would read,” she said, “because it was after Vatican II and he was the first Black lector in our parish. And I loved to hear him read God’s Word.”

“That was the thin thread that kept me to my faith,” Wendy said. “When I got to college, it was just going to hear Daddy read — and that was it.”

After purchasing their first home, a fixer upper in a predominantly Black community, James, following the footsteps of his father-in-law, became a lector at St. James Church. “I found that this was something that I absolutely loved to do,” James said. “We became very engaged, very involved.”

James offered his gifts as a religious education instructor, and “once again we’re building into this sense of feeling stronger in our faith,” he related.

While at the parish, however, Wendy was pregnant with twins and the pregnancy ended with a miscarriage.

“Everyone in my parish knew I had a miscarriage,” she sadly shared. “No one in that parish made it their personal business to reach out and comfort us. No one said, ‘We have this wonderful faith. Use your faith as your crutch.’ There again I was at a parish where I was going through the motions of being Catholic. There was that wonderful opportunity for someone to evangelize to me and no one did it.”

Wendy shut down. “I was just there to get my ticket punched,” she said.

The Summers family later moved to a more affluent suburb of Wheaton. There, they tried to become engaged and involved in a parish, a predominantly white parish. The family registered and James indicated his interest in being a lector at his new parish.

“No one responded,” James said. So he reached out again. It wasn’t until a priest from their former parish contacted a family he knew at the new parish that James was invited to “audition” to be a lector. James auditioned and was accepted.

“It’s not what’s said, it’s what’s heard,” James said. “What I was hearing was ‘they just didn’t really think that I could be smart enough, or intelligent enough, or articulate enough to be a lector.’”

He became a lector, but still felt a level of superficiality. “I was useful from the standpoint that I would be seen on the altar and it would show that this parish was diverse and was reaching out to be diverse, even though in reality I didn’t feel that it really was,” James said.

“When people intentionally really want you to be part of them,” Wendy said, when they want it from the heart, “it will show. You will hear it in their words. And it will change you.”

A job change brought the Summers to live in the South Bend area. At first, when the James took the job, he attended St. Augustine Parish in South Bend, which was near his residence.

“We went there; I really enjoyed it; it was small; the people were really welcoming,” James said.

When the family arrived, however, they decided to purchase a house near St. Pius. The Summers debated which church they would attend and finally decided upon St. Pius.

James, at first, really did not want to attend St. Pius, but at the very first Mass the family attended, “we walked in the door — I already had a chip on my shoulder — and this older couple came walking over to us out of the blue and he stuck out his hand and said, ‘Hi, I’m Bill Wieger, welcome to St. Pius.’”

“And I looked in his eyes and I saw Christ,” James said.

Wendy commented how Bill intentionally welcomed the family. Bill was not a greeter, not on the welcoming committee.

“When you intentionally reach out to someone, it makes a difference,” Wendy encouraged. “Reach out person to person in love.” The Wiegers and Summers have been friends for 16 years.

At St. Pius, James got involved. He attended a Christ Renews His Parish weekend. Wendy was an extraordinary minister of the Eucharist but still did not feel engaged until Julie Meyer, mother of Father Jacob Meyer, asked Wendy one Sunday at church to “go on a CRHP weekend.” Wendy attended the CRHP.

“(Meyer) intentionally including me, changed the woman I am to this day,” said Wendy. Reconciliation is part of the CRHP weekend, and Wendy had not been to Reconciliation in 25 years, “and I was a Eucharistic minister. What was I thinking!” she exclaimed. “But I saw something in those women. They were so inviting. I thought, ‘I got to have what they have.’”

The women prayed with Wendy and she went to Confession. “When I left the Confessional,” she said, “filled with the Holy Spirit, it was like I was walking on air. I thought, ‘I missed all of this for 25 years.’”

Wendy was changed. She no longer was just going through the motions. “It was my moment of revival,” Wendy said. “I know it changed me, it changed our marriage, it changed everyone I know — because somebody, one little lady, said, ‘come on a weekend.’”

All Catholics are called to be observant. When someone does not feel included, “then it’s my turn to be the Bill Wieger,” the Summers noted. “Reach out and include someone.”