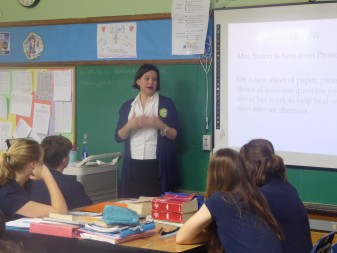 Allison Sturm of the Office of Evangelization discusses how to express the truth of abortion in charity during a recent presentation to eighth-grade students at St. Joseph School, South Bend, about the diocese’s Project Rachel Post-Abortion Ministry.

“’Truth in Charity’ is Bishop Kevin Rhoades’ motto, and it has really cut to my heart,” Allison Sturm, Project Rachel Post-Abortion Healing Ministry specialist for the Diocese of Fort Wayne-South Bend, explained to eighth-grade students at St. Joseph School, South Bend. “Yes, I was pro-life. But (with) the ugliness of the way I presented my views, I could have hurt people. I was convicted, but all the time I didn’t realize I was pushing people further and further away. I always felt that I spoke the truth, but not always in charity.”

Sturm traveled to the school on Jan. 17 to share her witness and her personal experience of being pro-life with the students, narrating how her friend and supervisor treated and spoke with her in a compassionate, kind and trusting manner, allowing her to recognize a more Christ-like option when speaking about pro-life issues — “Because how we say it matters,” she explained.  Sturm added that her supervisor in the Office of Evangelization then asked her to lead the Project Rachel program in the diocese, which has helped her to grow, recognize and remember the humanity and pain caused by abortions — as well as the great need for prayer and healing.

Project Rachel, the post-abortion healing ministry of the Catholic Church, first began in Milwaukee, Wis., in 1984, when Vicki Thorn noticed how many people, not just woman who had the abortion, were affected and damaged by the choice. There were grandparents who had lost their grandchild, friends who had driven a friend to an abortion and fathers still mourning their deceased children. The program’s name comes from Scripture, Jeremiah 31:15 and Matthew 2:18, where Rachel is weeping loudly, mourning the loss of her children. Project Rachel programs and Rachel’s Vineyard retreats can be found today in over 110 dioceses across the United States.

Sturm recognized that for many of the middle school students she was speaking to, this might be their first time hearing about it, and she is aware that in the coming high school, college and young adult years they might meet, date or be friends with people who have been affected by abortion.

To learn how to speak the pro-life truth in charity is a valuable and realistic goal, she said.  Also relevant is the fact that in 2014 30 percent of aborting women identified themselves as Protestant and 24 percent identified themselves as Catholic, according to the Guttmacher Institute, the former research arm of Planned Parenthood. Women aged 15-19 years old — teenagers — were 11.4 percent of the abortions in 2013, as reported from the Centers for Disease Control website. 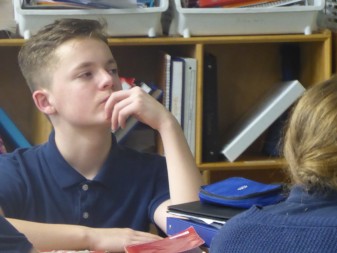 An eighth-grade student at St. Joseph School, South Bend, listens to a presentation by Allison Sturm of the Office of Evangelization about the Project Rachel Post-Abortion Ministry of the diocese.

Sturm reminded the eighth graders that “we all make mistakes and deserve to be forgiven.  There is nothing that God can’t forgive. God wants us to be in relationship with Him.” Quoting Romans 8:39, she added: “Nothing in all creation will ever be able to separate us from the love of God revealed in Christ Jesus our Lord… .”

The St. Joseph students were thoughtful and respectful of Sturm’s words. One female student wondered how many women did not regret their abortions. Sturm answered the query with the same mercy and charity she suggested.

She explained how there are stages of denial afterwards, and people often don’t want to face the reality of the choice. She highlighted the conversion story of Abby Johnson, former clinic director of Planned Parenthood in Bryan, Texas, who became a huge pro-life advocate and leader for changing people’s hearts in the abortion industry in 2009, after working for them for eight years. Her website, “And Then There Were None” has helped over 300 hundred former abortion workers leave their jobs. Sturm also recommended reading the Silent No More website, offered by a nondenominational, Christian program and featuring personal testimonies and resources after an abortion.

Lastly, she encouraged the students’ preparation for the March for Life in South Bend Jan. 27.  Sturm spoke of the joyous reality of people gathering and marching in Washington, D.C., to support the pro-life movement in America. And if given the opportunity to speak, she encouraged them to do so with “Truth in Charity.”