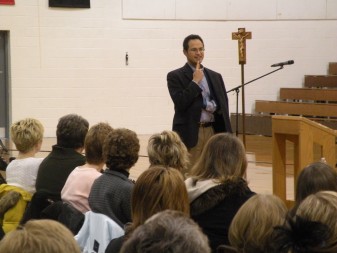 Dr. Edward Sri was the keynote speaker at the Institute for Catechetical Formation for Fort Wayne area Catholic schoolteachers on Feb. 24. The event, held at Bishop Luers High School, was coordinated by the Office of Catechesis and included Mass celebrated by Bishop Kevin C. Rhoades. Sri is the co-founder of FOCUS, the Fellowship of Catholic University Students, and serves as the provost and professor of theology and Scripture at the Augustine Institute’s Master’s program in Denver, Colo.

Edward Sri offers a biblical walk through the Mass at workshops in Mishawaka, Fort Wayne

FORT WAYNE — “The Mass is the most biblical way to worship God,” noted Dr. Edward Sri, a nationally-known, dynamic Catholic speaker who appears regularly on Eternal Word Television Network and has authored many books.

Sri offered those attending his recent workshops in Mishawaka and Fort Wayne a unique tour of the liturgy and traced the biblical roots of the prayers of the Mass.

He began with the first prayer of the Mass — the sign of the cross, and spoke in depth on its biblical roots.

“It is a prayer (the sign of the cross) that has tremendous roots in Scripture,” Sri said.

He explained, “In the Bible, when we call on God’s name, we are invoking His presence.”

“We are calling on God’s presence, and His name, and our help,” Sri told Catholic teachers who were attending the Institute for Catechetical Formation day, organized by the Office of Catechesis and held at Bishop Luers High School in Fort Wayne on Feb. 24.

Sri related how the sign of the cross goes back to the Old Testament Prophet Ezekiel.

In Ezekiel’s time, he was living in a cultural crisis in Jerusalem. The majority of Jews were no longer truly following God’s ways. They were Jews who went to temple, but they were formed more by the pagan culture around them.

At the time, they were living immoral lives and worshipping false gods. God announced to Ezekiel that there would be a judgment on the city unless the people repented, and the Babylonians would take the Jewish people away and make them slaves.

Things were bleak, but God showed Ezekiel that there were some who wanted to remain faithful and this way of life was not working.

“And these faithful ones are going to be given a mysterious spiritual mark on their forehead. And this mark is going to be a sign of protection, a sign of fidelity,” Sri related.

This sign that God gave is the last letter of the Hebrew alphabet, the “taw,” which happens to look like a cross.

“The earliest Christians saw that (“taw”) as a prophetic foreshadowing of the ritual sign of the cross that we make,” Sri explained. “And that background from Ezekiel 9 can shed light for us when we make the sign of the cross.”

“This isn’t just some ritual,” Sri said. “It is a powerful thing.”

“Just like in Ezekiel’s time, we live in a period of cultural crisis,” he noted. “There are many people today who don’t want to go along with the immoral ways of living in the world around us. And we desire to follow God. We want to have strong marriages. We want to raise godly children, virtuous children. We want to form children in Catholic schools to live differently, to be light in this world, salt of the earth.”

Sri pointed out two things that we do when we make the sign of the cross.

First, “We are saying, ‘God, I love You. I want to be faithful to You, not in the ways of this world,” he said.

“Secondly, when we make the sign of the cross, we are saying, ‘God, I want to call on Your help and protection in my life,’” Sri said. “Protect me in my life. Protect me from all harm, from danger, from sin, from temptation.”

One of the very practical things that the faithful can take away from the sign of the cross, Sri related, comes from looking at what the early Christians did.

One early Christian said the sign of the cross should be made on all occasions: “Over the bread we eat, over the cups we drink, in our comings and our goings, in our sleep, in our lying down, in our rising up.”

“The sign of the cross is a powerful safeguard, for it is a grace from God, a badge of the faithful and a terror to the devils,” the early Christian added.

“It other words, it is that sign of faithfulness, but it is also a mark of protection,” Sri said.

He offered some practical advice to those attending the talks.

“The sign of the cross is something you can turn to throughout your days whenever you are facing a struggle, a trial or a temptation,” Sri noted.

When those difficulties arise throughout the day, Sri encouraged the teachers gathered at the formation day to make the sign of the cross.

“That’s what the early Christians did,” he said. “They turned to the sign of the cross to find strength, to persevere in their sufferings and trials.”

When faced with temptations, or struggles with certain sins, “It is a great time to turn to the sign of the cross for Jesus’ help,” Sri said. When one catches himself in these struggles, “say Jesus’ name in your head, and trace the sign of the cross over your heart very simply,” encouraged Sri, “and find God to help you not go down that road. …”

The second practical point Sri encouraged was for parents to trace the sign of the cross over their children’s heads. “It’s a beautiful thing every morning to bless your children and every night before they go to bed,” Sri, a father of six, shared.

Sri’s talk continued with the rich biblical background of the Mass, especially with the new translation that has been recently implemented in the English-speaking countries.