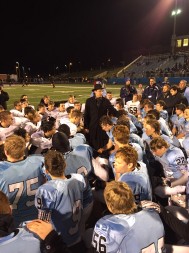 Provided by Joe and Jennifer Miller
Father Terry Coonan, himself a Dwenger graduate and current Saint Joseph chaplain, offers a blessing to both teams, together, after the game.

By Joseph and Jennifer Miller

SOUTH BEND — The Bishop Dwenger Saints are one step away from accomplishing their dream. The Saints advanced to the Class 4-A state championship football game for the second consecutive year with a convincing 41-7 triumph over host Saint Joseph at Father Walter Bly Field Nov. 20.

The Saints vaunted running attack was the key to the victory. “We knew we had to be able to run the ball, and we did,” said Dwenger Head Coach Ernie Bojrab. Led by offensive lineman Landon Campbell, Nick Maguire, Jeremy Herber, Sean McAbee and Landon Meyer, the Saints ran for 272 yards on the night.

Both teams showed early jitters by turning the ball over on back-to-back first quarter drives. Later, after Saint Joseph failed to cleanly field a punt deep in it’s own territory, Dwenger recovered on the four-yard line. Two plays later, junior quarterback Blake Podschnle plunged into the end zone from two yards out to put the Saints on the scoreboard first.

Saint Joseph punted on it’s next possession and Dwenger took the ball over on it’s own 23 yard line. Behind their mammoth offensive line, the Saints marched the ball 77 yards down the field capped off by a two-yard touchdown stomp from junior fullback Peter Winkeljohn.

Moments later, Saint Joseph answered with a 13-yard touchdown pass from Tony Carmola to Mark Madden. That score cut the deficit in half with 5:29 left in the second quarter.

Saint Joseph’s glimpse of hope proved short lived however as the Saints quickly posted two more touchdowns to take a commanding 28-7 lead to the locker room. The Saints two quick strikes came thanks to the fancy footwork of Amaun Clark on a 22-yard scamper and the arm of Podschnle who connected on a 27-yard laser to Mike Hake.

In the second half the Saints continued to run and throw the ball with precision and strength. Podschnle scored his second touchdown of the night from two yards out near the end of the third quarter and sophomore Michael Haupert closed out the scoring with 32-yard touchdown run in the fourth quarter.

Meanwhile, the stout Dwenger defense, which has held four of its last five opponents to a touchdown or less, continued to shut down Saint Joseph in the second half. “Our defense has been keeping us in the game from the start of the season,” said Bojrab.

The Indians certainly had nothing to hang their heads about. After a grueling regular season schedule, Saint Joseph entered the playoffs with 5-4 record. They then rattled off four straight wins picking up sectional and regional titles along the way.

Saint Joseph Head Coach Ben Downey told his team he was proud of them after the game. “This was a tough way for it all to end because the score got to be so lopsided. But, what our guys did is in the history books now … they won a couple of championships.”

For the Diocese of Fort Wayne-South Bend, this high level matchup of two Catholic schools served as a proud testimony. To be competitors on the field and brothers in Christ off demonstrates the beauty of Catholic education. Father Terry Coonan, himself a Dwenger graduate and current Saint Joseph chaplain, visually and spiritually showed this reality as he offered a blessing to both teams, together, after the game.

Interestingly, Friday night’s matchup marked the 25th anniversary of the 1990 meeting of the Indians and Saints in the semi-state game. Dwenger won that year and went on the following week to claim the first of what would be back-to-back state titles. Now, Dwenger returns to Lucas Oil Stadium for the second consecutive year and it’s 10th state championship appearance overall. The Saints take on East Central this Saturday at 3:30 p.m. A determined Bojrab enjoined his players to “Enjoy tonight, because tomorrow it’s back to work.”

In Mishawaka, Marian too vied for a chance for an opportunity to advance to state in Class 3-A semifinals at Otolski Field. Hopes were dashed in the last five minutes of the game as No. 3 West Lafayette took possession of the ball and won, 14-10.