Not surprisingly, the vocations of each of the priests who serve as chaplains in the high schools of the Diocese of Fort Wayne-South Bend were born of prayer; their own, and those of key people in their lives.

When Father Jonathan Norton, chaplain at Bishop Dwenger High School, Fort Wayne, was a child preparing for his first Communion, the religious education teacher urged students to sit up close to the altar at Mass. During the consecration, the second-grader thought, “Wow! That’s cool!” And then, “I could do that.” After he became interested in girls during junior high school the inspiration receded, but it remained on the back burner.

As a football player at Bishop Luers High School, Fort Wayne, Norton passed the school’s grotto every time he left the locker room. Taught never to cross in front of Our Lady without some sign of reverence, he admits that briefly taking a knee was his most consistent form of prayer for a number of years.

In his mid 20s, he “reverted” to the Church. “Spending time in Eucharistic adoration finally gave me courage to step forward and pursue the call,” he said. 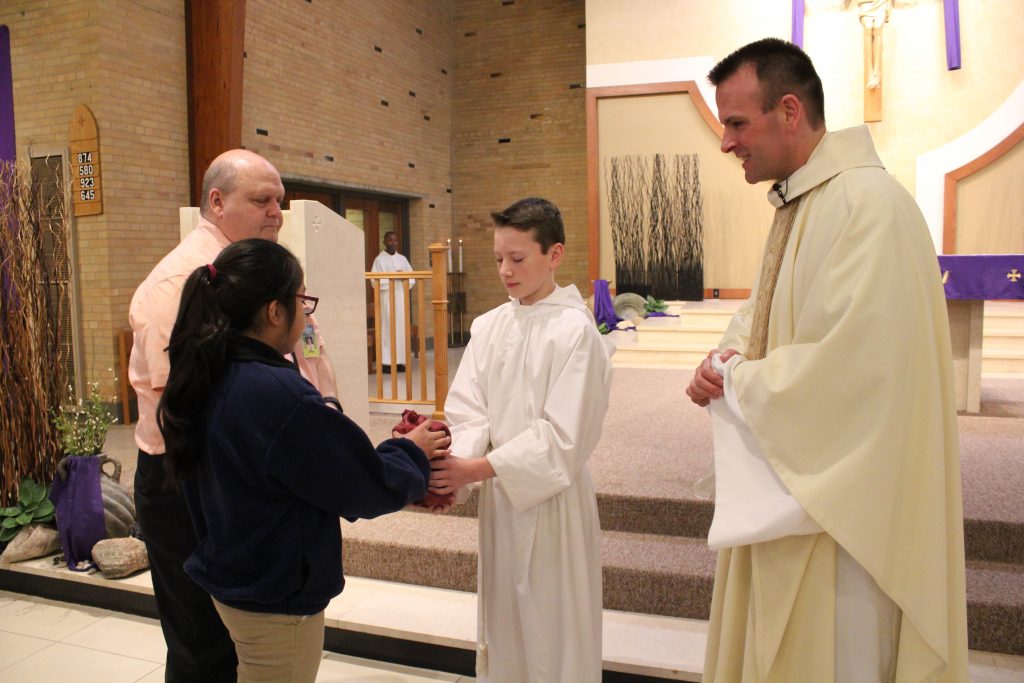 Christ the King School, South Bend, Principal Steve Hoffman prepares to receive the vocation chalice from server Luke Kaufhold and pastor Father Steve LaCroix, CSC. A different school classroom or staff member displays the chalice each week as a reminder to pray for vocations. Christ the King has a second vocations chalice that is sent home from Sunday Mass with a different family. Also pictured is student Maya Matthews. — Eileen Dimino

Eucharistic adoration was also key in Father Ben Muhlenkamp’s call. As a youth minister at St. Vincent de Paul Parish, Fort Wayne, a strong need for heavenly reinforcement drew him to St. Jude Parish’s perpetual adoration chapel, usually at 9 or 10 p.m. In addition to intercessory prayer, he did a lot of reading; not only Scripture, but of other spiritual readings like the diary of St. Faustina and leaflets on the priesthood. Eventually he felt the Lord nudging, “Hey, go be a priest.”

The current Bishop Luers chaplain, Father Muhlenkamp is also grateful for the prayers of his godfather, “Uncle Bud.” He tells new parents at his parish of St. Louis, Besancon, “Don’t just pick your best friend as godfather for your child. Find the holiest person you know.”

The prayers of other people first planted a seed in the mind of Father Terrence Coonan Jr., chaplain at Saint Joseph High School in South Bend, he believes. Since there were four boys in his family, when he was in seventh grade their parish priest said that one of them should probably be a priest. Young Terrence’s initial response was “No, thank you,” but he later learned that his grandmother, who had six sons, had fervently prayed for one of them to become a priest. Although God didn’t answer that prayer, both grandparents continued praying for their grandchildren every day. Father “Terry” and his brother, Father Matthew Coonan, were both ordained in 2011.

Eucharistic adoration at St. Jude was also important for Father Terry. Spending lunch hour in the chapel during high school and after his first year of college was “huge, a beautiful time. I grew in my faith.” He experienced no “megaphone from the sky,” he said, but by Christmas break of his sophomore year at the University of Dayton he was ready to talk to the vocations director. “Not because I knew I had a vocation, but because I had a hunch I needed to explore that possibility.”

Father Christopher Lapp, Marian High School chaplain, said, “The role of prayer in my vocation story was absolutely central. As a freshman at the University of Dayton, after receiving outstanding formation in my parish youth ministry program, I committed to attending daily Mass and praying for a holy hour before the Blessed Sacrament every day. I’m convinced that responding to the Lord’s invitation to grow in consistency of and depth in prayer was the largest factor in opening my heart to a vocation to the priesthood.”

When Dwenger students express an interest in a religious vocation, Father Norton’s advice is simple: keep praying and take it one step at a time. He prays for every student to fall in love with Jesus Christ and follow wherever He leads. That love is foundational, whether a person is called to marriage or religious life, biological or spiritual fatherhood. Father Norton also enjoys hanging out with students during lunch hour, as does Sister Benedicta from the Sisters of St. Francis of Perpetual Adoration.

Father Terry enjoys sharing his own enthusiasm for the priesthood in classrooms on vocation days. He urges Saint Joseph students to foster a life of prayer and make space for silence so they can hear God’s whispers in a noisy world. He also advises, “Don’t close any doors too early.”

Father Muhlenkamp interacts with Luers students primarily through his homilies and in the confessional. He urges them to go where they feel most peaceful, rather than making decisions in times of inner turmoil. “As long as you’re prayerfully drawing closer to the Lord,” he reminds them, “you’re not wasting your time. Start walking down the road, but tell the Lord you’re open to being stopped if He chooses.”

Father Lapp said he strives to keep the Lord in the Eucharist at the center of his habits of prayer. He promotes vocations at Marian “first by trying to be faithful to my vocation. A faithful and joyful priest, wed to the grace of Jesus seeking an individual young man, can do tremendous good in drawing the heart of a young man toward the priesthood.”

Several of the high schools prominently display a “wall of faith” (Dwenger’s term) with photos of male and female graduates who have entered religious life. “It helps our students see this as a possibility for themselves,” says Father Norton.

All four of the chaplains grew up at St. Vincent de Paul Parish, one of several parishes now promoting vocations through the Melchizedek Project, where men read and discuss Father Brett Brannen’s book, “To Save a Thousand Souls,” and learn how to discern a vocation to the diocesan priesthood. Junior high students at St. Vincent can also join Mercy Club, which spends time twice a month in adoration, journaling and praying the Divine Mercy chaplet.

Christ the King in South Bend promotes prayer for vocations through two special chalices. One is passed to a different class at the school Mass every week. The other goes home from Sunday Mass with a different family. Parishioners have been using these chalices for about 10 years as a reminder to pray for vocations.

Although St. Joseph Parish in South Bend no longer circulates a vocations cross, one retired parishioner continues to pray for vocations every day. Associate Pastor Dan Ponisciak, CSC, teaches third-, fourth- and fifth-grade students in the school using the Holy Cross Vocations curriculum, developed in collaboration with the Alliance for Catholic Education. Father Ponisciak said, “The lessons focus on discerning God’s call and growing in prayer. We start early to help the kids start thinking now about the fact that each of them has a vocation from God, and that they can begin now to think, pray and respond to what He wants them to do with their lives.”

The Serra Club of South Bend and the Father Solanus Casey Vocation Guild of Fort Wayne exist to promote and help sustain vocations to the priesthood and religious life. According to Serra President Ted Niezer, every member is committed to praying daily for a specific list of priests, seminarians, religious brothers and sisters in this half of the diocese. “Once assigned, you never stop praying for that person, even if he dies or leaves the seminary.” They also write encouraging notes to them.

Serra International was founded in 1935; it is a global lay apostolate recognized by the Vatican for the promotion of vocations, with its own spirituality and charism. It encourages specific prayers not only for people to respond to God’s call, but also to persevere in their vocations.

The South Bend Serra chapter began in 1948. Members gather every month in the St. Joseph Medical Center chapel, and a vocation story is shared at each of their meetings. They also provide certificates for faithful altar servers in every parish. There are adjunct members as well, men and women unable to attend meetings because of infirmity, distance or other responsibilities. These members of the “31 Club” divide up the days of the month and commit to praying for vocations on “their” day each month, with updates from the chapter president.