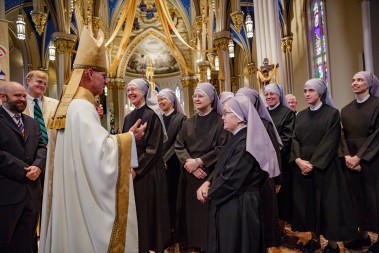 The Evangelium Vitae Medal was presented to the Little Sisters of the Poor for their ministry to the elderly and poor and their courage in standing for religious freedom in the face of the federal government’s contraception mandate. Bishop Kevin Rhoades greets the Little Sisters of the Poor after Mass in the Basilica of the Sacred Heart, Notre Dame.

NOTRE DAME — A standing ovation in a packed Basilica of the Sacred Heart greeted the Little Sisters of the Poor who were on campus April 9 to receive the Evangelium Vitae Award for outstanding service to human life. The Little Sisters operate 30 homes in the United States that offer health care and assisted living for more than 13,000 low-income seniors.

The award has been presented annually since 2011 by the University of Notre Dame’s Center for Ethics and Culture. Awardees are announced on Respect Life Sunday in October, with the honor being conferred the following spring.

The 2016 award event took place about two weeks after the Little Sisters had appeared before the United States Supreme Court, where they are challenging a government mandate that requires employers to offer employee health insurance that includes contraceptives, sterilizations and abortion-inducing drugs.

The unusual standing ovation erupted early in the homily of Fort Wayne-South Bend Bishop Kevin C. Rhoades at the Mass preceding the award banquet. He alluded to the First Reading from the Acts of the Apostles, comparing the witness of the sisters to the witness of the apostles who were called before the Sanhedrin and told to stop teaching in the name of Jesus:

“At this Mass, there is a community of sisters with us who, in the face of a terribly unjust mandate of our federal government, have stood up, and by their actions have said what Saint Peter and the apostles said to their government in the earliest years of the Church: ‘We must obey God rather than men,’” the bishop observed.

“I wish to say to the Little Sisters of the Poor who will receive the Evangelium Vitae medal this evening, thank you for your courageous witness!”

The enthusiastic ovation then erupted in the congregation heavy with Notre Dame students. 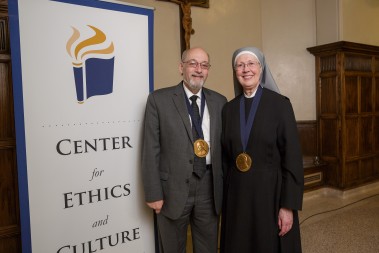 Sister Loraine Marie Maguire with Richard Doerflinger, who was honored with the inaugural Evangelium Vitae Medal in 2011.

Bishop Rhoades went on to encourage the rest of those in attendance, “When human laws contradict God’s laws, believers are called to obey God even if disobeying human authority will cost them social advancement, their livelihood, or their lives.” Bishop Rhoades drew connections between the words in the Acts of the Apostles to life today. “St. Peter’s words in today’s reading are a rallying cry in many situations in which people are pressured to violate their consciences by human laws or commands.” He continued, “It is good to ask ourselves: where did the first disciples find the strength to bear witness to Christ?  What was the source of their joy and courage to preach and live the Gospel in the midst of so many obstacles and even violent persecution? We learn from Acts that the only explanation is the presence of the Risen Lord with them and the action of the Holy Spirit in their lives. They were enabled to follow in the footsteps of Jesus, to witness to Him with their lives, and to share in His sufferings with joy.”

At the banquet after the Mass, the Evangelium Vitae Medal was conferred on Little Sister of the Poor Loraine Marie Maguire, who as United States mother provincial of the international order, represented the sisters. Over a dozen Little Sisters of the Poor and some residents from several of the sisters’ homes also attended.

Conferring the medal was Director of the Center for Ethics and Culture, Carter Snead, who recently was named to the Pontifical Academy for Life, which advises the pope on life issues. Snead also is a Notre Dame law professor.

Sister Loraine Marie said the Little Sisters were “honored beyond words” to receive the award, and she thanked the sisters’ residents for making the sisters’ ministry—and the award—possible.

She related that the sisters had faced many challenges in their legal battle, but also had “received many graces and an outpouring of love and support” and had come to “a new level of faith and trust in God’s Divine Providence over us.”

Sister Loraine Marie credited the power of prayer for helping the Little Sisters through the recent difficult months, saying that prayer is essential for being able to show acceptance and respect for others with a different belief system, while also witnessing to the truth.

She urged supporters at the banquet to consider “our common commitment to the Gospel of Life in this ‘Year of Mercy’” by following Pope Francis’s encouragement to “gaze even more attentively on mercy so that we may become a more effective sign of the Father’s action in our lives.”

The Evangelium Vitae medal is accompanied by a $10,000 prize. Past winners include  the Knights of Columbus and the Sisters of Life.