In the information age, Catholic married couples sometimes say they feel a sense of isolation and loneliness in their vocation. Although technology has played a pivotal role in the way people communicate and interact with others, a creeping separateness seems to be encroaching on couples’ primary relationship.

To maximize the benefits of technology, the Diocese of Fort Wayne-South Bend Office of Marriage and Family Life offers a free, eight-week marriage enrichment course on Zoom. Deputy Secretary Lisa Everett said The Marriage Course Online is a subset of a larger nondenominational evangelization resource called Alpha, the purpose of which is to introduce people of all walks of life to the message and person of Christ.

Originally developed at Holy Trinity Brompton Church in London, England, Alpha consisted of 10 sessions on various Christian topics intended to draw in both nonbelievers and those interested in deepening their Christian faith. Current Alpha curate Nicky Gumbel and his wife began a marriage and family ministry around the same time Alpha became a common evangelization tool, in the late 1970s. 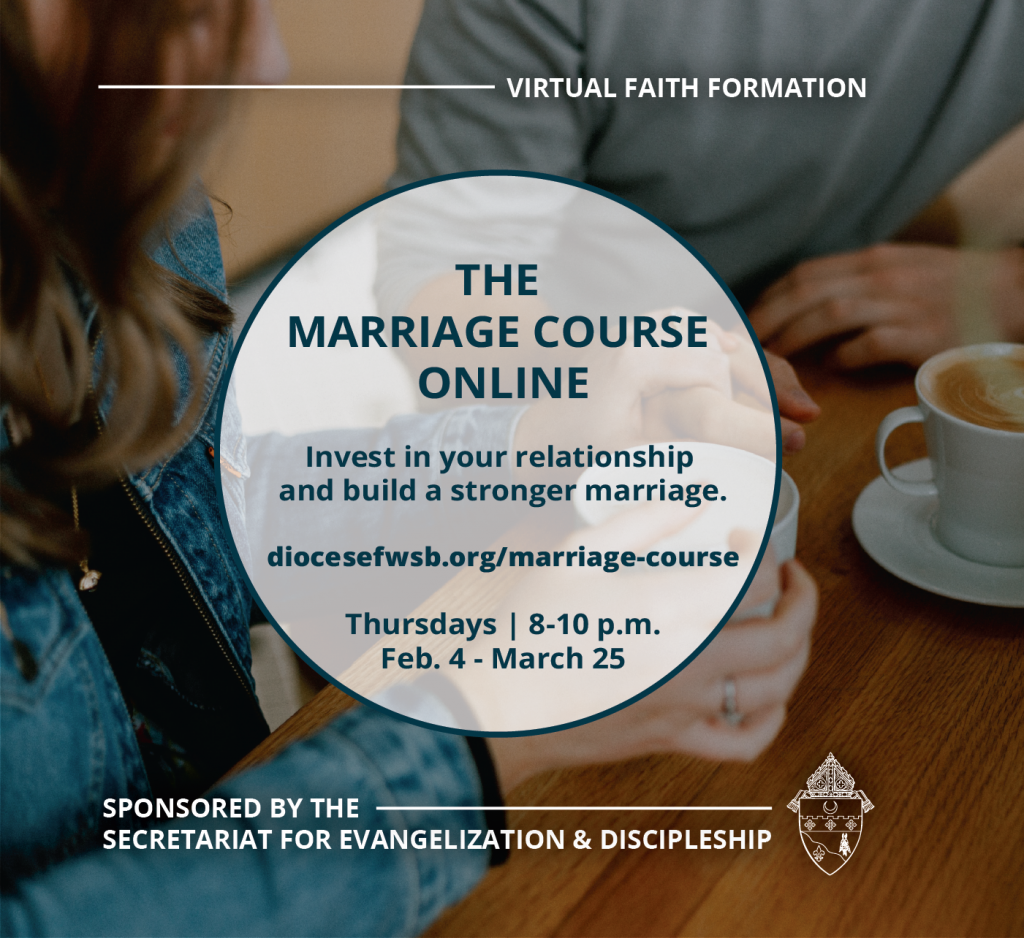 Because of their experience with both the program and with marriage ministry, the Gumbels believed both could work in tandem to enrich married couples’ lives.

“The film series approaches marriage from a Christian perspective, with the intention of helping couples develop good life skills and deepen their intimacy,” Everett explained. “It functions as a discipleship tool, as well, which is why our diocese is promoting both the discipleship and marriage courses.”

She is confident that many Christians may consider themselves to be devout but have not necessarily developed a deeper relationship with Christ. Mishawaka married couple Eric and Michelle Szajko agreed.

“This course on marriage would have benefited us tremendously in the earlier years while we were parenting our kids. It’s still fruitful after being married this long,” Michelle shared. “We were having great conversations after all these years when we didn’t know how to get communication started. The extra nudge from this program really enriched our marriage.”

The marriage course is structured in weekly, two-hour increments beginning Feb. 4 and concluding March 25. Everett will begin each session by introducing the evening’s topic from a specifically Catholic standpoint, then share the engaging video session.

What’s unique about this course is that the Alpha creators have built in 30 minutes of reflection and discussion time so that each couple has the opportunity, in the moment, to share their hearts with each other. A supplement to the course, a journal that includes prompts and questions as well as suggestions for continuing conversations between spouses, aids the couple in exploring their relationship on a deeper level.

Everett said that the crux of the course intends to assist married couples in building and maintaining good relationship skills with each other. “It’s very in-depth. I want to be clear that there is no small-group discussion. The course is for each couple to share with each other privately.”

Eric Szajko was grateful his wife suggested they participate in the marriage course the first time it was offered.

“People need to realize that the vocation of marriage is sacred, from God. We are one. When couples fight, it’s mostly because they are tugged toward their individualistic tendencies rather than remembering the one-flesh union,” he shared.

With beautiful cinematography and testimonies from real-life couples all over the world, both Everett and the Szajkos said the accessibility and vulnerability of the hosts make this marriage course a powerful tool for any married couple, regardless of how long or short they’ve been married. “Those participating will know they are not alone, because they have the inspiration of other couples who are leading and sharing their own stories on the films,” Everett explained.

She herself spends time praying for each couple participating in the marriage course during the 30 minutes when private discussion is to take place between them. She believes that the hard truths explored in the Alpha marriage course are a deep, but necessary, dive into mutual understanding, healing, and ultimately a stronger bond between spouses.

The Szajkos, who have been married for 22 years and have two older children, feel that the marriage course was easy to understand and nonthreatening. “It was more about looking forward in your marriage instead of looking back to what had already happened,” Michelle said.

In addition, she explained that the course shifted her perspective. “I wasn’t just thinking about my side of the story anymore. I thought more about Eric and what his needs are. I wanted to be more considerate to him in our day-to-day interactions,” she concluded.

Everett believes there are two fundamental obstacles in marriages today: that couples don’t have adequate time to invest in connecting with each other and God, and also that the cultural understanding of what marriage is has become skewed and misguided.

“The Church has a responsibility to provide a good presentation of what marriage is, beginning with marriage preparation, but also assuring couples of the reality of grace,” she shared. “The course does not shy away from the spiritual. When we give our time to our spouse, we are giving time to God, especially when we foster mutual prayer time together.”

“Guys, I would encourage you to join with your wives,” said Eric. “It’s not girly or feminine in any way. It’s a really great way of connecting better with your spouse and create a stronger marriage. Just man up and do it.”