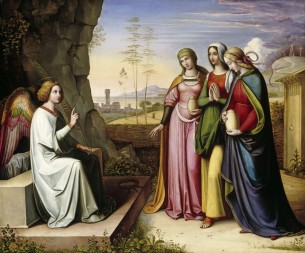 Last week, we began with Palm Sunday and walked through Holy Week, ending with Holy Saturday. Now, at Easter, we look at the liturgical celebrations of our Risen Lord.

Easter Vigil
Commencing at nightfall on Holy Saturday, the Easter Vigil – or the “Great Vigil” — is the high point of the Easter Triduum and of the entire liturgical year. It is when the Church keeps vigil at the tomb and rejoices with the arrival of Easter and Christ’s Resurrection.

In the Early Church, the Easter Vigil was when the elect were baptized, given their white garments and welcomed to the Holy Eucharist. But the practice became lost, such that there actually was no true Easter Vigil until Venerable Pope Pius XII began instituting a number of liturgical reforms in the 1950s. In fact, Holy Thursday, Good Friday and the Vigil were all celebrated on the mornings of Thursday, Friday and Saturday.

A main reason was the Tridentine fasting regulation, which strictly forbade that any food be eaten between midnight and the reception of Holy Communion at Mass that day. As such, it was impractical to have evening Masses. When Pius XII loosened these regulations, it allowed for the Holy Week liturgies to be situated at much more appropriate times, lending a greater authenticity to the celebrations. Moreover, reforms after the Second Vatican Council restored the character of the Vigil as one of Christian initiation.

The Service of Light begins with “Lucernarium” (from the Latin word for “light”), when the Paschal Candle, lit from the Easter fire outside the church, is brought into the darkened church building. The candle is dipped into the font that will be used to baptize the elect, symbolizing Christ sanctifying the waters. The darkness (whose onset was recalled at Tenebrae) is dispelled by the “Light of Christ,” and the flame is spread to the candles of the individual Christians gathered in the Church. The Paschal Candle itself will be used throughout the season of Easter, and especially for Baptisms and funerals during the coming year. When light has been restored, the magnificent and ancient text of the “Exsultet” is chanted. The current English translation begins: “Rejoice, heavenly powers! Sing, choirs of angels! Exult, all creation around God’s throne! Jesus Christ, our King, is risen! Sound the trumpet of salvation!”

The Liturgy of the Word includes seven Old Testament readings, although that number can be shortened for time constraint reasons. Prior to Pope Pius XII’s reforms, there were 12 Old Testament readings. The current selection is drawn from Genesis, Exodus and prophetic texts — all alluding to creation and redemption. Then, the church bells are rung and the Gloria is sung, marking the end of the expectant vigilant period and a rousing elevation of our Easter joy. Following a reading from Romans, the Alleluia returns from its Lenten absence to herald the Resurrection Gospel: “He is not here, for He has been raised just as He said.” — Mt 28:6.

The subsequent rites of initiation begin with a Litany of the Saints, followed by the public Baptism of those who have completed their catechumenal journey and are now undergoing death and rebirth in Christ by the power of the Holy Spirit, working through the newly blessed water.

Afterwards, the newly baptized, and sometimes also those previously baptized who are now being brought into full communion with the Catholic Church, receive the Sacrament of Confirmation, using the Sacred Chrism consecrated earlier in the week. All those in the assembly then renew their baptismal promises to reject Satan and remain faithful to God, and all are sprinkled with baptismal water.

The first Mass of Easter then continues with the Liturgy of the Eucharist, and for the first time, the newly baptized are permitted to join their brothers and sisters in Christ as they receive the Body and Blood of our Resurrected Lord.

Easter Sunday
Masses during daylight on Easter Sunday don’t contain quite as much splendor as the Vigil, but they are extraordinary celebrations nonetheless. The Gospel is always taken from John Chapter 20, in which Mary Magdalene finds the stone removed from Christ’s tomb and runs to tell Peter and the other disciple, who return to find the tomb empty. A wonderful liturgical practice, always observed on Easter Sunday, is the use of the Easter Sequence, “Victimae Paschali Laudes” (the title is from the first line, which translates as “Christians, to the Paschal Victim offer your thankful praises”) immediately before the proclamation of the Gospel. The sequence is a very ancient tradition, and is exceptionally beautiful when sung — especially in the original Latin chant form, which is not very difficult to learn.

The Easter Triduum officially ends with Vespers (Evening Prayer) on Easter Sunday, but the solemn feast of Easter is celebrated for eight days, known as the Easter Octave. The eighth day, the Second Sunday of Easter, has recently also become known as Divine Mercy Sunday. The concept of the “Eighth Day” is very important in Christian theology and liturgy. Six was considered a number of imperfection by Jews and Christians, while seven was the perfect number — for instance, God rested on the seventh day of Creation, which became the Sabbath. The “Eighth Day,” as a day beyond even the seventh, is known as the “eschatological” day (derived from “eschaton,” the Greek word for “last”) — it is the day of Christ that points to His “Parousia,” or Second Coming, together with the end of time and the fulfillment of God’s Kingdom. Sunday was often referred to as the “Eighth Day” in the Early Church. Baptisteries and baptismal fonts were and still are constructed to be octagonal, indicating the eschatological reality of sacramental death and new life — eternal life — in Christ.

During the Easter Octave, there is a long-standing tradition of Christians exchanging a variety of Easter greetings. One might say, “Christus resurrexit!” (“Christ is risen!”), and another would respond with either “Vere resurrexit!” (“He is risen indeed!”) or “Resurrexit sicut dixit!” (“Risen just as He said!”) or “Deo gratias!” (Thanks be to God!”).

Easter Sunday in the West falls on the first Sunday after the first full moon after the vernal equinox. In terms of date, this can be anywhere from March 22 to April 25. This year, Easter has a very late date of April 24. Easter will not be so late again until 2038, when it falls on April 25, the latest possible day.

In his superb book, “The Spirit of the Liturgy,” written while he was still a cardinal, Pope Benedict XVI discusses the timing of Easter. The date of Easter not only has a historical relationship with the date of the Jewish Passover, but has also come to express the cosmic significance of the Lord’s Resurrection. By celebrating Easter on a Sunday (the “Eighth Day”) after the first fully “risen” moon of spring (a season of renewal), Christians express the power and universality of sacred time, uniting the rich symbolism of the solar and lunar calendars.

The Easter season lasts 50 days: Ascension Thursday comes 40 days after Easter Sunday (although it is observed on Sunday in much of the United States including this diocese), and is followed 10 days later by Pentecost Sunday, the conclusion of the Easter season.

As we can see, there is much more to the commemoration of Christ’s Passion, Death and Resurrection than just Easter Sunday, or even Holy Thursday and Good Friday. The Easter Triduum and all of Holy Week are a very interwoven expression of and participation in the Paschal Mystery that we celebrate every Sunday.

I encourage all to try to attend as many of these Masses and liturgies as possible, including the Easter Vigil. By immersing ourselves in the Church’s liturgical life, we spiritually bind ourselves more fully to Christ our Head. We can then better serve as joyful witnesses while we accompany tens of thousands of people — in the United States alone — who will sacramentally enter into the life of the Catholic Church during Easter this year.