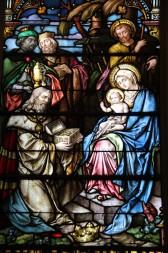 A stained-glass window of the Epiphany at the Cathedral of the Immaculate Conception, Fort Wayne.

I was thinking about this theme as we approach the Solemnity of the Epiphany. The theme of light abounds throughout the Christmas season. At Christmas Midnight Mass, we heard the announcement from the prophet Isaiah: The people who walked in darkness have seen a great light; upon those who dwelt in the land of gloom, a light has shone. On the first Christmas, the shepherds were watching over their flock at night when the angel of the Lord appeared to them and the glory of the Lord shone around them.

In the Mass of Christmas Day, we heard the following words from the Prologue of Saint John’s Gospel regarding the Incarnation: What came to be through Him (the Word) was life, and this life was the light of the human race; the light shines in the darkness, and the darkness has not overcome it.

The theme of light emerges again on the Solemnity of the Epiphany. The word Epiphany means “manifestation.” On this solemnity, we celebrate the manifestation of the Christ Child to the world as the light of salvation for all peoples, represented in the figure of the Magi. Significantly, a star guided the Magi to Jerusalem and then to Bethlehem. The Magi were guided to Christ, the Light of the World, by the light of a star. They found the goal of their quest for “the King of the Jews” below the star. Saint Matthew tells us that they were overjoyed at seeing the star, and on entering the house they saw the child with Mary his mother. They prostrated themselves and did him homage.

As we celebrate the Solemnity of the Epiphany this weekend and as we begin this new year 2015, we contemplate Jesus as the light and salvation of the world as well as our vocation to be the moon that shines the light of Christ in our lives and in the world. This is the universal and missionary vocation of the Church. We are called to spread throughout the world the light of the Gospel, a source of life and renewal for every person and for humanity.

To spread the light of Christ to others, it is first necessary for us to be guided ourselves by His light. We must be illumined by the sun (the Son) if we are to give light like the moon. We are not able to spread to others the light of Christ unless we are first illumined ourselves by His light, by His life and teachings. It is good at this time of New Year’s resolutions to be resolved to live this new year in the light of faith. This includes a regular discipline of daily prayer and fidelity to Sunday Mass. In prayer and in the Eucharist, Jesus enlightens us with His wisdom, truth, and love. Jesus is not just some external light, but a light within us, the light who gives meaning and purpose to our lives. We need His light. We need His salvation. Otherwise, we are afraid and can be overcome by the darkness of the world.

I invite you to meditate this weekend on the mystery of the Epiphany and the adoration of the Magi. The Magi are an example for us to open our minds and hearts to Christ and to offer Him our gifts. May Mary, the Mother of God, help us in the new year to be faithful disciples of her Son, the light of the nations!