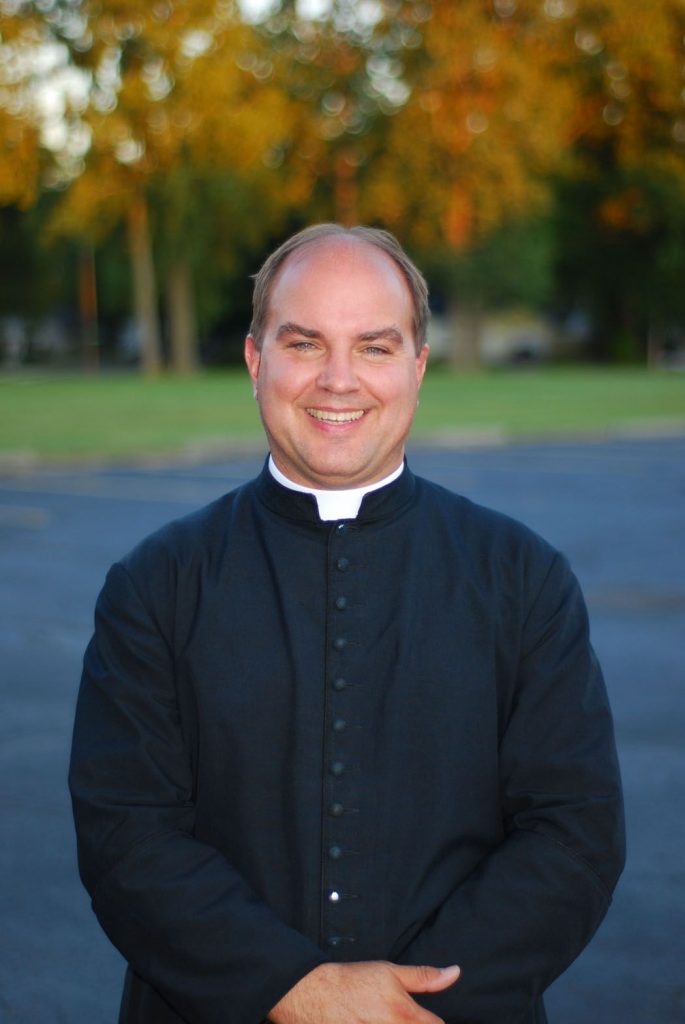 Roman collars were not part of his life plan of a wife and a passel of children. But Father George Gabet, FSSP, could not ignore the many occurrences that were “too much of a coincidence to be a coincidence,” leading him to the priesthood. This year, he is celebrating 25 years of a calling he never anticipated.

Born into a large family of nine, Father Gabet was educated at St. Charles Borromeo and Bishop Dwenger High School in Fort Wayne. He had even graduated from Ball State University before he realized his calling. One defining moment came at the 20th anniversary Mass for Monsignor Edward Hession, St. Charles Borromeo’s first pastor. Father Gabet remembered how “the very holy priest” thanked the congregation for their gifts but remarked that the greatest one would be having a priestly vocation come from his time there. A twentysomething young man sat in the back. Lo and behold, “This old lady turned around, she turned back to the front and then very slowly, turned around and faced me,” Father Gabet recalled. Then she pointed at him and declared that she thought he was that vocation. He was floored.

During this time, his parents became involved in a group called the League of St. Anthony, which advocated for the traditional Latin Mass. He attended one Mass at Sacred Heart Parish in Fort Wayne and was impressed by its beauty, though he did not know the proper verbal responses. So he spoke to the priest, who told him that he could still “have that intimate, interior dialogue with God” even without understanding the words.

“I started doing that and I realized I prayed better at the Latin Mass. I could actually participate better interiorly and I could sing along with the Gloria and the Sanctus and the Kyrie. I didn’t need to know the other words,” he shared. “But it seemed like my prayer life improved immensely then, by the reverence there of the Mass and also by just praying better instead of just giving the responses.”

A couple other pieces fell into place at the same time – namely, his involvement in the pro-life movement as well as a Saturday evening men’s group he regularly attended, both of which influenced his faith life. He had already made a consecration to Mary by the time he was introduced to the Priestly Fraternity of St. Peter, a religious order newly formed at the time in reaction to Pope John Paul II’s encyclical Ecclesia Dei, and dedicated to the TLM. When a friend planned to host a priest of that order to garner more vocations, Father Gabet tried to encourage his friends to attend, promising he would be there as well.

“I was the only one who showed up,” he said with a laugh. “I had no intention; I was going to have 10 kids.” Yet somehow, he filled out the paperwork after speaking with the priest.

Then he left for what became known as the “Summer of Mercy” in Wichita, Kansas, a large pro-life movement. There, he experienced a realization: he needed to do God’s work full-time. Returning to Fort Wayne, he received an acceptance letter for the Seminary of Wigratzbad in Germany, the order’s first and only seminary at the time – though he only had a rudimentary understanding of French, one of the languages in which the lessons were taught. Interestingly, Wigratzbad is a pilgrimage site to Mary, to whom he already had a great devotion.

“After I got that, I spent two hours at the St. Jude adoration chapel,” he stated, discerning whether or not he should go into the seminary. He came out knowing which direction he was being led. He hadn’t told anyone about the decision he was wrestling with, so he spoke with a parish priest, who told him how hard it could be to learn Latin in French: “‘You’re going to have to make a short way of the cross every day.’ And that was the best advice possible, because that’s what I did,” Father Gabet remarked.

Seminary was tough, but “every time I thought it was game over, I wasn’t going to make it, the Blessed Mother put somebody there to help me.”

Rather than be ordained in Bavaria, without his large extended family in attendance, he requested ordination in his home diocese. Bishop John M. D’Arcy ordained him to the priesthood at the Cathedral of the Immaculate Conception in 1997. Father Gabet described the day as “ a dream. It was a dream come true.”

Devotion to Latin Mass was spreading in the U.S., so he was sent to Oklahoma for his first assignments. After seven years as a priest, the Fraternity asked him to serve as District Superior of the North American District, which included Canada and the U.S. “So we grew pretty rapidly then too; a lot of good things happened in those four years. And I put everything in the hands of the Blessed Mother; that’s all I could do.”

Four years later, after helping establish the Our Lady of Guadalupe seminary in Denton, Nebraska among his other accomplishments, he requested a return to parish life. He never expected to return to the parish where his love of the Latin Mass first blossomed, but that is exactly what happened. Bishop D’Arcy had called the order and asked for a priest for the burgeoning Latin Mass community in the Diocese of Fort Wayne-South Bend; someone who could travel between Sacred Heart in Fort Wayne and St. Patrick in South Bend. Father Gabet spent eight years at Sacred Heart Parish and helped establish the Latin Mass community in South Bend. Being back home even allowed him to be present when his father passed away, anointing him at the end of his life.

Now he is Pastor of Holy Family Parish in Dayton, Ohio. He praises the goodness of God and looks back on the unexpected gift he was given, awed by his vocation and joyful to be an instrument to bring the sacraments to others. “It was not my plan, not at all. … Now 25 years passed by. Incredible!”