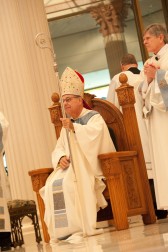 10th bishop of the Diocese of Saint Augustine, Fla., June 2, 2011
They came here as refugees. Twenty-six young boys. Part of the Pedro Pan Project, which brought thousands of young boys and girls to this country, sent by their Catholic parents so they would not fall under the influence of Fidel Castro’s communist regime. The regime which, as expected, implemented an anti-Church policy. Awaiting them in Fort Wayne was a Catholic welcome and at the head of it, the late Msgr. J. William Lester, who became the mentor and spiritual guardian of these 26 boys — “the Cuban boys” — as they are called to this very day. Among the 26 who arrived in Fort Wayne were Felipe Estévez and Carlos Rozas who were ordained priests. Felipe was ordained a bishop and was recently installed as the 10th Bishop of the Diocese of Saint Augustine, Fla., one of the oldest Catholic settlements in North America, founded about 1550.

Felipe’s journey
Not long afterwards, Bishop Estévez’s whole family came; and he remembers Father Lester driving around St. Peter’s Parish with the young boy in tow trying to find a home that would not be too expensive, finally securing one on Eckart Street in St. Peter’s Parish. Felipe hoped to return to Cuba as a priest. He studied in Canada, with priests who had missions in Cuba. Ordained a deacon in St. Jude Church, Fort Wayne, and a priest in the Cathedral of the Immaculate Conception, he served several years in Honduras awaiting the opportunity to return to preach the Gospel of Christ in his native land. Alas, it was not to be; and seeking the help of the Holy Spirit, he chose the next best opportunity to evangelize his people by returning to Miami, where so many Cubans had come to find political and religious freedom. He was ordained a priest of the Miami Diocese, was sent to Rome for a doctorate in theology (see sidebar) and was appointed the rector of St. Vincent de Paul Seminary in Boynton Beach, Fla.

A turn to Msgr. Lester
The friendship formed between the teenage refugee and the devoted priest continued and Father Felipe turned to his friend. Bishop Estévez told Msgr. Bob Schulte years later:

“We had to build up the seminary and receive accreditation. The only person I knew with the wisdom and experience to make this possible, was Msgr. Lester. So I called him. And with the permission of Bishop McManus, Monsignor came to Miami to help us. With his help and guidance, we received accreditation and became a seminary for the entire region.”

When Father Estévez was made a bishop in 2004, Msgr. Lester returned to Florida to attend his Episcopal Ordination. I remember his joy at being invited and being given a central part in the installation. Monsignor gave the homily at a special Mass for the Estévez family, whom he knew well having given them such pastoral care and affection over the years in Fort Wayne. Msgr. Lester’s cousin, Marcie Hunter, recently wrote: “Wouldn’t Father Bill be proud and thankful that one of his Cuban boys has accomplished so much? Bishop Estévez’s life story is truly remarkable and inspirational. I remember him as a teenager, coming to our house with Father Bill and some of the other Cuban boys who had no place to go on holidays or on summer vacation. Please thank Bishop D’Arcy for sharing the news, and let him know that I am so pleased and grateful that he will be there for Father Bill. It will be an event he would not have missed.”

I sensed on receiving the invitation that it was my obligation to attend, to represent Msgr. Lester especially and the diocese, and so many others. So, I found myself in the historic Basilica Cathedral of Saint Augustine in the diocese of that same name in northern Florida. A few minutes prior to a beautiful celebration of Evening Prayer, I approached Bishop Felipe. What happened next was one of those extraordinary moments that happen rarely in one’s life. I was about to speak when Bishop Estévez approached me with Bishop Robert Baker of Birmingham, who had worked with Msgr. Lester and Father Felipe at St. Vincent de Paul Seminary.

“You have come to represent the diocese and the city which welcomed me as a teenager, a refugee, so long ago.”
The love and joy was in his eyes and mine, too. Bishop Baker said to me, “I can see so much emotion in your eyes.” I replied to Bishop Estévez:

“Bishop, I bring the greetings of the Diocese of Fort Wayne-South Bend, Bishop Rhoades and the alumni of Central Catholic High School; and most of all I come to represent our beloved friend, Msgr. Bill Lester.” ‘Yes,’ he replied, “and also the Poor Handmaid Sisters!”

It was the Poor Handmaid Sisters who staffed St. Vincent’s Villa and welcomed these young refugees, and with Msgr. Lester, gave them a home that included the sacraments and prayer, and a truly Catholic life. A place where his vocation was fostered.

When Msgr. Lester died last year, Bishop Estévez came all the way from Miami to be present at the Mass and he drove with Msgr. Schulte, myself and a few others to Bluffton on a cold February day for the burial of this special priest.

In a note received after I returned to Fort Wayne, Bishop Estévez wrote, “Msgr. Lester was an icon of the Good Shepherd.”

The Installation
The next day I concelebrated with about 25 bishops and 3,000 priests, religious and laity at a beautiful Mass of Installation. The Church in Florida is special because it is so multicultural — people from Cuba, Haiti, the Dominican Republic, Puerto Rico and native Floridians. I met Bishop Estévez’s mother and his sister. He has a brother who is a doctor. They lived over 20 years in Fort Wayne. A great Catholic story and a great American story. The homily of the new bishop of Saint Augustine filled with faith also showed his deep devotion to Our Lady. I believe in Cuba she is hailed as Our Lady of Charity. She had accompanied Felipe on his remarkable journey, as she accompanies us all. The charity extended by Msgr. Lester and the Poor Handmaid sisters and our diocese so many years ago has brought abundant fruit for the Church.

The Servant of God
— Felix Valera

Present in faith at the installation of Bishop Estévez, was the remarkable Cuban patriot, priest and servant of God, Father Felix Varela, 1788-1853. When Blessed Pope John Paul II came to Cuba and spoke at the University of Havana to the Cuban leadership with Fidel Castro seated in the front row, the pope’s focus was on this extraordinary priest, a Cuban native. Father Varela supported Cuban freedom from Spain, the dignity of the human person and above all the Catholic identity of Cuba. He was a distinguished professor of philosophy who opposed slavery, supported equal education for women and Cuban independence from Spain. Condemned to death by the Spanish Crown, he fled to New York where he served as a priest for 25 years. He was assigned to the Irish area and supported the rights of Irish immigrants fleeing from the Great Famine. He was appointed vicar general of the Diocese of New York. He returned to Saint Augustine, where there is now a statue honoring him outside the Cathedral Basilica. At the request of the Cuban people, his body was later returned to Cuba.

Bishop Estévez, as Msgr. Lester reminded me, wrote his doctoral dissertation on the spiritual teaching of Father Varela. The cause for canonization of this remarkable priest is moving forward.

In the program for the Mass of Installation, under Father Varela’s picture, were the following words:
“I now wish to fulfill a promise which I made long ago, to make a profession of faith — at death as in life — in the Real Presence of Jesus Christ in the Blessed Eucharist. I firmly believe that the Host which you hold in your hand is the Body of Jesus Christ under the appearance of bread. Lord come to me!”

— The last recorded words of Father Felix Varela as he was given Holy Communion as Viaticum before his death in February 1853.