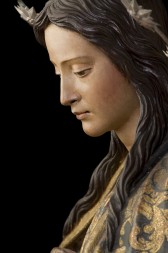 As we approach December 8th, my thoughts go back to World Youth Day this past August. On our way to Madrid, the young pilgrims from our diocese and I spent 2 ½ beautiful days in Lourdes as spiritual preparation for World Youth Day. Many of our young people have told me that our time in Lourdes was the highlight of their pilgrimage. It was truly a highlight for me, especially celebrating Holy Mass at the grotto where Our Lady appeared to Saint Bernadette.

The apparitions in Lourdes took place in 1858. The young Bernadette did not know the identity of the beautiful lady who appeared to her 18 times. When Our Lady appeared to her on March 25th, the feast of the Annunciation, Bernadette asked her name. Mary’s reply, in Bernadette’s native dialect, was I am the Immaculate Conception. In a way, this reply was a kind of confirmation of the dogma defined by Pope Pius IX just four years earlier.

Lourdes had a powerful impact on me and our young people. It is a holy place where we experienced the joy of our faith in Christ and our spiritual closeness to His Immaculate Mother. It is a place where many miraculous physical cures have occurred. It is also a place where there is much spiritual healing, a place where the sinless Mother of God continues to bring strength and consolation to her beloved children.

Meaning of the dogma

These are the words of Blessed (Pope) Pius IX in defining the dogma of the Immaculate Conception on December 8, 1854:

We declare, proclaim, and define that this dogma is revealed by God and therefore to be firmly and unremittingly believed by all the faithful: namely, the dogma which holds that the most Blessed Virgin Mary, from the first moment of her conception, by a singular grace and privilege from Almighty God and in view of the merits of Jesus Christ, was kept free of every stain of original sin.

Though this dogma was not defined until the 19th century, Mary’s absolute holiness was a belief of Christians since the early centuries of the Church. In the East, there was a feast of the Immaculate Conception of Mary celebrated as early as the 7th century. All agreed that Mary was preserved from all personal sin, but through the centuries, especially in the Middle Ages, there was much debate about whether or not Mary had contracted original sin. Some felt that immunity from original sin would compromise the important teaching that original sin had to be remitted by Christ, the Redeemer, and no one could be redeemed apart from Him.

A theological solution to this dilemma was proposed by Blessed Duns Scotus, a Franciscan theologian of the 13th century. He defended Mary’s privilege of immunity from original sin from the moment of her conception. He explained that this did not detract from the Redemption brought by Christ. Mary too was included in the Redemption and she received it from her Son at the moment of her conception. This is called “preservative redemption.” That is why in the dogmatic definition, the Pope said that Mary’s Immaculate Conception was “a singular grace and privilege from Almighty God and in view of the merits of Jesus Christ.” This settled the controversy. The universality of the redemption remains intact. Mary was really redeemed by her Son at the first moment of her existence.

Mary was truly, as the angel Gabriel announced, “full of grace.” She was accorded the grace of redemption “in view of the merits of her Son.” Why was this? It was part of God’s plan. God destined Mary to become the Mother of his Son. How could she, even for a moment, have been in the power of the devil? The one who was to bring forth the Savior could not have been subject to the corruption that derives from original sin.

Mary always by our side

Mary’s holiness is an encouragement for us to seek her help and her protection in our efforts to overcome sin and to grow in holiness. Like us, she has been redeemed by Christ, but in an eminent and a privileged way. In this, she is like a sister to us, as well as our spiritual mother.

The Blessed Mother is with us in the concrete situations of our lives. She helps and comforts us to face the trials and challenges of daily life. She watches over us from heaven. She guides our steps in the way of her Son. She helps us to make progress in our Christian lives, helps us with her motherly care to follow Jesus.

May Mary Immaculate accompany us on our Advent journey! May she lead us to know, love, and adore the Son of God who became man in her holy womb!