“The deepest element of God’s commandment to protect human life is the requirement to show reverence and love for every person and the life of every person.”

The words of Pope St. John Paul II in his foundational 1995 encyclical, “The Gospel of Life,” (“Evangelium Vitae”) was a clarion call for modern-day Catholics to identify the ways in which human life was being threatened, and to act to restore value to the most basic gift given by God to mankind — the gift of life.

But there was a finer point to St. John Paul II’s message, one of comfort for millions of people across the world today: that life itself is not all God wants for His children, but a life filled with dignity and love. Pope Francis has actively encouraged the same awareness during his pontificate and repeatedly pleaded for charitable treatment of the poor and disenfranchised, the migrant and the incarcerated. 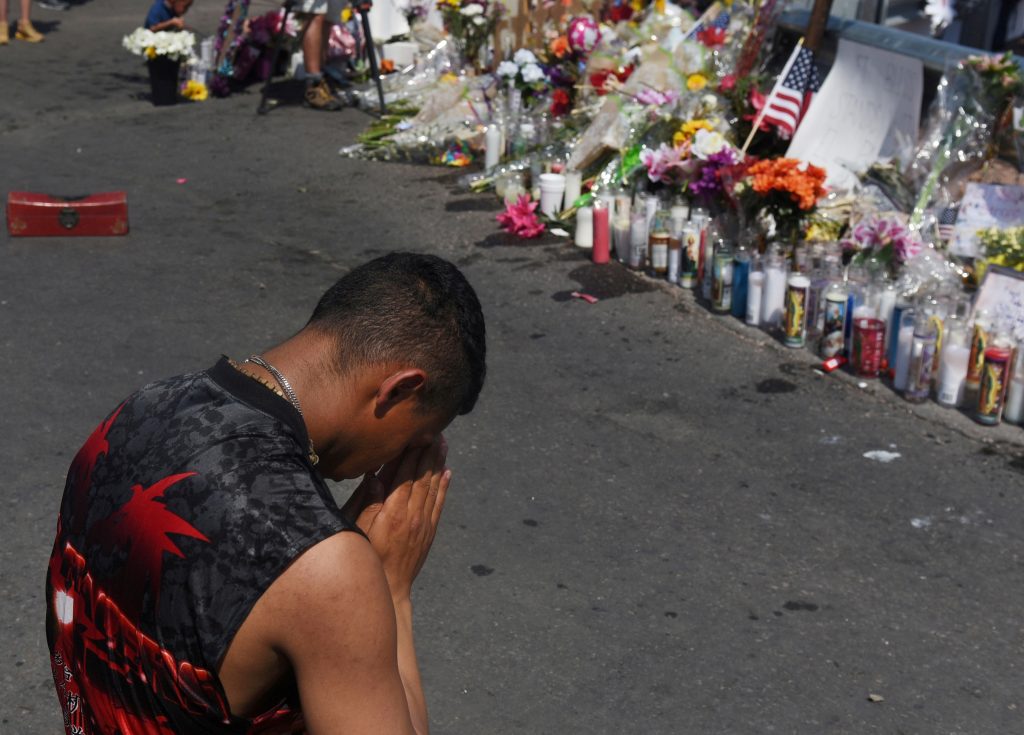 A man prays at a memorial Aug. 6, 2019, three days after a mass shooting at a Walmart store in El Paso, Texas. A year after the deadly shooting, El Paso Bishop Mark J. Seitz has announced the formation of a group to address racism as a way to honor the victims. (CNS photo/Callaghan O’Hare, Reuters)

The Catholic Church worldwide is recognized for being a leader in the fight for life, “from conception to natural death,” as it’s often phrased. But although the Black community has historically been the target of the abortion industry, the bookends of life are hardly the only points at which the dignity of people is threatened.

“That’s what the corporal works of mercy speak to,” said Caty Burke, associate director of the Marriage and Family Ministry for the Diocese of Fort Wayne-South Bend. Racism is a pro-life issue because it fails to respect the value and dignity of another person’s life.

In a country awakened this year by the public deaths of Black citizens George Floyd, Breonna Taylor and Ahmaud Arbery at the hands of white police officers, Catholics are among those questioning their complicity in and their obligation to address racial injustice in the U.S.

“The message is that we’re called not to simply tolerate all life, but celebrate every life,” said Lisa Everett, deputy secretary of the office of Evangelization and Discipleship. “When the dignity, and certainly when the life of any person is threatened, we’re called to jump in and defend life.

“One of the principal documents of the Second Vatican Council, ‘Lumen Gentium,’ states that ‘The Church is meant to be a sacrament of unity—a sign and instrument of union with God and of the unity of the whole human race.’ But instances of racism don’t always come to the point of someone’s life being at stake – but also the fact of somebody’s dignity being demeaned. … It’s the complete antithesis of the reverence we are supposed to show one another,” said Everett.

Pope Francis emphasized the same truth in June, saying in a statement issued following Floyd’s death, “We cannot tolerate or turn a blind eye to racism and exclusion in any form and yet claim to defend the sacredness of every human life.

Moved to action by widespread unrest following the deaths, the Office of Marriage and Family Ministry organized a Facebook Live rosary on June 19, or “Juneteenth” — a commemoration of the end of slavery observed by Black communities.

For Everett, the rosary was a way to begin fulfilling her desire to recognize and validate the assertions of the Black community.

“We were meditating on the sorrowful mysteries of the rosary, and it really hit my heart in a way it hadn’t before. I was looking at how the suffering of our Black brothers and sisters in this country, starting with slavery, really paralleled in so many ways the suffering of Jesus, and His passion and death.”

The many challenges to life and the dignity of all people of the world compel Catholics to action. But sometimes one need is more urgent than another, and the argument exists that while Catholics have a mandate to value and protect all life, now is a moment in time when particular focus should fall on valuing and protecting the dignity of Black lives.

“Let’s say you’re a married couple and your wife is just feeling down. And she says to you, ‘Do you love me? And he responds, ‘I love everyone.’ Which, while a true statement, does not regard their relationship and does not give her comfort. She needs to know that he loves her at that moment, because she is the one who is experiencing some kind of suffering.”

“This situation that we’re in, I’ve seen it compared to the parable of the lost sheep,” Burke added. “There was the one who was lost – in trouble and in need of the Shepherd – and so when the Shepherd leaves the 99, he’s not saying ‘You’re not important to me,’ he’s saying, ‘You’re safe and you’re doing OK. Because I know you’re OK, I’m going to rescue my other sheep, who’s in need right now — bring him back into the folder and make sure he’s doing OK as well.” 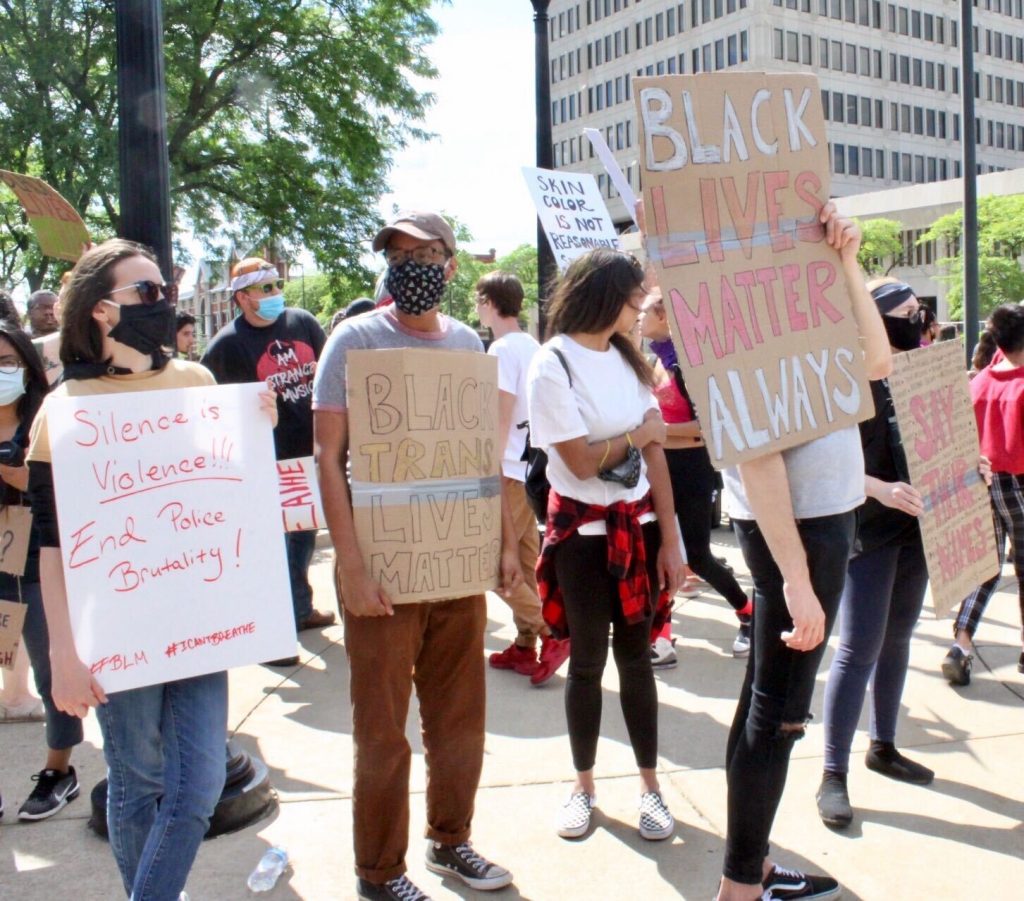 Prayer for the victims of racism, as well as for the conversion of hearts of those who perpetrate it is the place to begin addressing the sin of racism, say Everett and Burke. Not just because God promises to hear and answer prayer, but also the act of prayer helps individuals come to a greater awareness of racism and become motivated to address it.

An examination of conscience and making spiritual reparation can also be helpful in identifying where a person might have perpetuated a stereotype by joking or laughing something off or hurt someone by failing to speak up in a certain situation.

Everyone can increase their sensitivity to racial injustice. Everett and Burke said.

“Even for me: In preparation for the Juneteenth rosary, I read and I watched films I wouldn’t normally have watched,” said Everett. When you love someone, you want to know what they feel. “There were things I can’t believe I had never heard of before. But I had never read it. Nor had I ever asked.”

Because Christians are created for communion with God and with one another, Everett suggested reaching out, based on that awareness, just to say, “I’m sorry for what you went through.”

Listen to Black Catholics and take seriously what they have to say about systemic racism and their own experiences, she encouraged. On the diocesan website, view the prayer service for racial justice offered by Bishop Kevin C. Rhoades’ Sept. 9, and the Juneteenth rosary, which is available to view on the Marriage and Family Ministry Facebook page. And if the situation is appropriate, show up in person to advocate for fair and equal treatment of Blacks, the way that Catholic faithful regularly show up to peacefully support the right to life of the unborn.

Perhaps more challenging is a personal mandate proposed Burke and Everett: Calling out people speaking with prejudice in the workplace or within the family.

“Call them out in truth and charity. This is what builds a culture of valuing life in all its stages,” said Burke.

“Words do matter, they’re not just arbitrary things, said Burke. “The Word became flesh – the second person of the Trinity is the Word. So the way that we speak… really does matter and really does affect people.”

The bishops of the United States encourage all to take steps to increase their awareness of racism as a pro-life issue. In their pastoral letter, “Open Wide Our Hearts,” issued in 1998 but updated this year, they state that in Christ, the strength and grace can be found to make that journey.

“In this regard, each of us should adopt the words of Pope Francis as our own: let no one ‘think that this invitation is not meant for him or her.’ All of us are in need of personal, ongoing conversion. Our churches and our civic and social institutions are in need of ongoing reform. If racism is confronted by addressing its causes and the injustice it produces, then healing can occur. In that transformed reality, the headlines we see all too often today will become lessons from the past.”