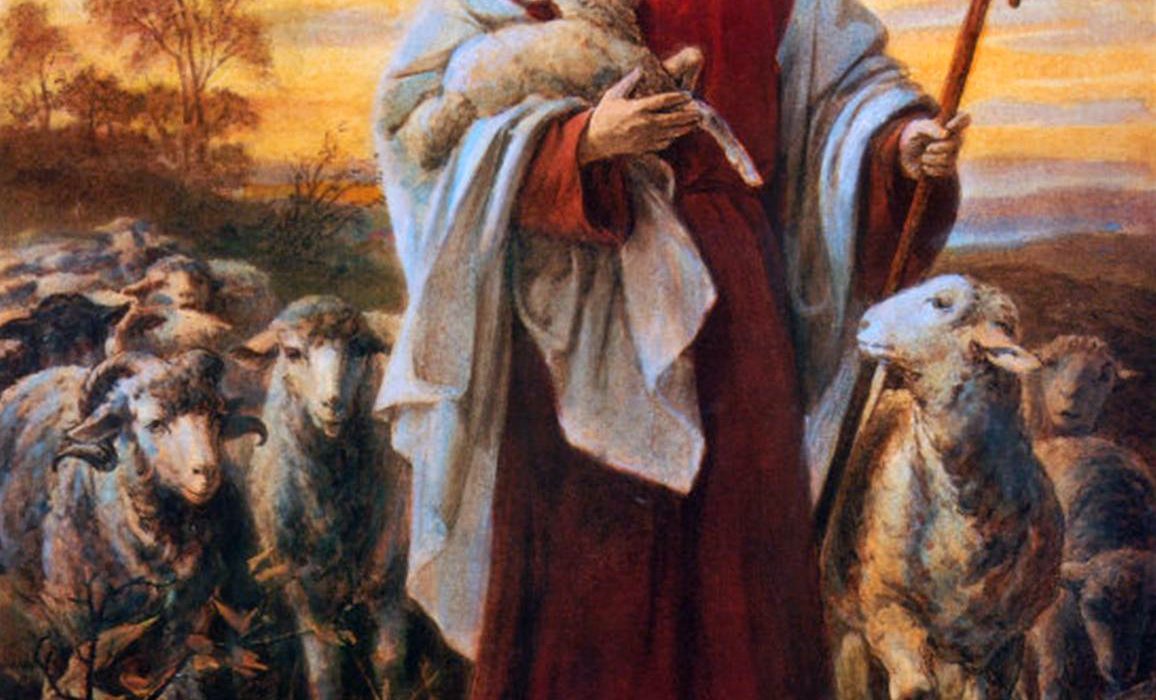 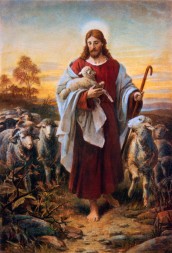 The painting “The Good Shepherd,” shown above is by Bernhard Plickhorst, a German painter and graphic artist, 1825-1907. Good Shepherd Sunday is the Fourth Sunday of Easter in the Catholic liturgical calendar.

Every year, on the Fourth Sunday of Easter, the Church’s liturgy presents to us the figure of Jesus, the “Good Shepherd.” The Gospel reading is taken from the tenth chapter of Saint John’s Gospel. This coming Sunday, the passage is John 10: 11-18. I wish to reflect in this column on this Gospel passage in which Jesus identifies Himself as the “good shepherd who lays down His life for the sheep.”

In the early Church, the figure of Christ as the Good Shepherd was a prominent image. This image is seen often in early Christian art. Clearly, it had great meaning for the early Christians since it often appeared, painted or sculpted, in the catacombs and on sarcophagi and baptismal fonts. Clearly, our ancestors in the Christian faith were moved by this image of Jesus. These effigies by the first generations of Christians show us that the image of Christ as the Good Shepherd was an image of faith that touched their hearts in a special way.

Already in the Old Testament, the figure of the shepherd was an image for God. The prophets Isaiah, Jeremiah, and Ezekiel spoke of God as the shepherd of the people of Israel. The people were referred to as the Lord’s flock. There is a particularly moving reflection on God as shepherd of His people in the famous Psalm 23 which begins: The Lord is my shepherd, I shall not want.” In this beautiful psalm, the author writes that he lacks nothing as long as the shepherd is with him. He speaks of letting God, his shepherd, lead him to safe pastures: He makes me lie down in green pastures. He leads me beside still waters; He restores my soul. He leads me in paths of righteousness for His name’s sake.

It is significant that Jesus applies this image of God as the shepherd to Himself. Jesus revealed an aspect of the Good Shepherd’s love that had not been revealed in the Old Testament when He said that a good shepherd lays down his life for the sheep. These words were confirmed during Christ’s passion. Jesus laid down His life on the cross. He did so with love and He did so freely. In this Sunday’s Gospel, Our Lord says: This is why the Father loves me, because I lay down my life in order to take it up again. No one takes it from me, but I lay it down on my own. Jesus offered Himself up on the cross to redeem humanity, to save every individual person. He did so with love, in union with His Father’s love for us.

There are other aspects of the shepherd that Jesus teaches us. He says: I am the good shepherd, and I know mine and mine know me. This is wonderful and consoling news. Jesus knows each of us. He knows our name. We are not anonymous persons to Him. We are not just part of a multitude or crowd. We are each individually known and loved. Saint Paul grasped this when he wrote: Christ loved me and gave Himself for me (Galatians 2:20).

Jesus not only says that He knows His sheep; He also says that His sheep know Him. The knowledge is mutual. The more we know Christ, the more we trust Him and love Him.

In speaking of Himself as the Good Shepherd, Jesus contrasts this with the mercenary (a hireling) whose sheep are not his own. When this hired shepherd sees a wolf coming, he leaves the sheep and runs away. Jesus says: This is because he works for pay and has no concern for the sheep. The Good Shepherd, in contrast, defends His sheep. He goes so far as to lay down His life for the sheep.

There are still mercenaries in the world who run away when a wolf comes. They do not really care about the sheep at all. Unfortunately, there are wolves who seek to devour the sheep. There are those who sow hatred, malice, doubt, and confusion. But Jesus, the Good Shepherd, defends us from these things. With the light of His divine word and the grace He gives in the sacraments, Christ forms our minds and strengthens our wills. He protects us.

In the Gospel this Sunday, Jesus also speaks of other sheep that do not belong to this fold. He says: These also I must lead, and they will hear my voice, and there will be one flock, one shepherd. Jesus desires to increase His flock. The Good Shepherd wants all people to know Him, love Him, and follow Him. These words of Our Lord remind us of the Church’s evangelizing mission. We should not ignore or neglect those who do not belong to the fold: those who do not yet know the Gospel, those who have abandoned it, or even those who are its adversaries.

By virtue of Baptism, every Christian is called to be “a good shepherd” in the environment where he or she lives: in the family, at work, in the community. I think, for example, of those who care for the sick and the suffering. There are many opportunities to be “good shepherds” in society, through works of mercy and compassion. And there is the mission of evangelization: sharing the Gospel with those who do not belong to the sheepfold of the Church.