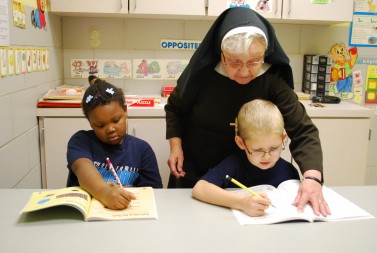 SOUTH BEND — Coworkers and associates of a small group of women who live in South Bend use many adjectives to describe this unique unit. Humble, hard working, loving, faithful, kind, strong, organized, humorous and the Italian word “felice” (happy) are among the many attributes these ladies bring to others on a daily basis.

The Felician Sisters, who are officially known as the Congregation of Sisters of St. Felix of Cantalice Third Order Regular of St. Francis of Assisi (CSSF), have four of their joyful community residing in South Bend. Sister Joan Marie Shillinger and Sister Mary Annelle Krych are associated with Holy Family Parish, with Sister Mary Anthony Kubat and Sister Catherine Ryzewicz at St. Adalbert.

Ministries within the order have evolved since its inception and include care of the aged, child care, diocesan work, domestic service, education, evangelization, foreign missions, health care, renewal programs, retreats, social services and youth ministry. There are nearly 1,800 Felician Sisters worldwide, according to Valerie Oltmanns, executive director of Strategic Communications of the Felician Sisters of North America.

Sister Anthony, a pastoral minister at St. Adalbert, recalls her initial reason for joining the Felician community. “I joined the order late in life after both of my parents had passed away. I fell in love with Mother Angela, our foundress, and her commitment to working with the poor, orphans, older women and displaced people.”

As an administrative assistant at St. Adalbert School, Sister Catherine comes into contact with many people. Being around Felician Sisters as a child at school was part of her decision to choose a religious vocation.

“They were fun friends for me. I saw a lot of joy in what they were doing and thought that is the kind of life I want, not truly realizing the inspiration was Christ Himself. My desire to be a sister comes from trying to strengthen that relationship,” Sister Catherine emphasized.

As in every vocation, challenges occur along a person’s life journey. Sister Joan Marie has been the principal of Holy Family School since 1993 and has seen many changes in the makeup of the family unit.

“Society has changed and it makes teaching much more challenging,” noted Sister Joan.

Because she was older when she made her final vow of profession, Sister Anthony recalled that the vow of obedience was challenging since she had led an independent life prior to joining the order. “But now I know that you just give in to the Holy Spirit and let that guide you,” she said.

Sister Annelle has been with Holy Family School for the past 27 years. She currently tutors students and recalls the joys of hearing from past school alumni.

“There was a little girl I used to call carrot top that I taught in first grade a long time ago and she called me up recently. That is a very satisfying part of my vocation,” reflected Sister Annelle.

With the consolidation of North America’s eight Felician provinces into one in 2009, there are opportunities for interaction with the extended Felician community at province gatherings. “When we all get together for big assemblies of 400-500 people, it’s amazing to find that we all have the same problems and the same joys,” said Sister Joan Marie.

In addition to sharing their faith with others in their daily work, the sisters try to incorporate the occasional social activity in their busy schedules. Sister Catherine noted that sometimes she and Sister Anthony are invited to the theater or symphony and all four sisters share a weekly meal with their parish priest.

Sister Annelle is a huge football fan. Her favorite college team is the University of Notre Dame, with the Detroit Lions her preferred professional team.

“Last year they (Lions) played like pussycats, but this year they’ve played well,” she beamed.

Bob Budzinski, assistant principal at Holy Family, stressed Sister Joan Marie and Sister Annelle’s vocations have been a source of pride for students and staff at the school.

“We have gotten a few vocations from Holy Family School. Father Drew Curry and Father Andrew Budzinski (Bob’s brother) are both Holy Family graduates. I think the sisters played a key role in the development of their formation by their Catholic identity,” said Budzinski.

“She also has a wonderful sense of humor which is vital in a school. She anticipates needs, which is fabulous, and we go straight to her if we have a religious question,” emphasized Bachman.

Sister Anthony’s devotion to the home bound and those in nursing homes and hospitals is greatly appreciated by the St. Adalbert community, according to the parish’s office manager Linda Shaw. “And she’s a great cook!” Shaw added.