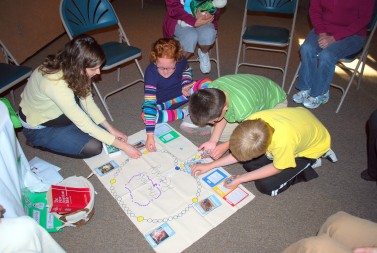 GRANGER — In the classroom of the Children of St. Angela Merici, Father Pius is dressed in the appropriate liturgical color of the season. Named after the patron saint of St. Pius X Parish, he is more than a doll, but rather as Michele Chronister remarks, “a class mascot, a familiar face present at all our events, always ready to be held by one of our students when they need to hold him. In this way too, he emphasizes the approachability and servitude of those in the priesthood, like our own Father Bill and Father Bob, who do so much for us. Father Pius teaches the students that priests are people who they can turn to throughout their lives, in the times when they need care, guidance and reassurance.”

It is with this same comforting approach to catechesis that the Children of St. Angela Merici religious education ministry was developed for children and adults with special needs at St. Pius X. The idea behind this ministry began four years ago with Amy (Schlatterbeck) Boll, who was then the director of the Catechesis of the Good Shepherd, after she was contacted by parents in the parish who had children with Down syndrome.

After Boll moved, Linda Jensen, director of religious education at St. Pius, with the help of two of Boll’s assistants, continued the special needs class. Last year Chronister joined the St. Pius education team as an ECHO (faith formation leadership program) student from Notre Dame and expressed her desire to expand the catechesis program for special needs for both children and adults.

“St. Angela Merici is the patron saint of people with disabilities so that is how we got the name of the program here at St. Pius. She was also a catechist and religious educator for little ones who would have otherwise gone without,” Chronister says.

Chronister has written the curriculum and made the materials for the classes. She has based her program from resources which include modified versions of the Catechesis of the Good Shepherd and St. Pius’ Children’s Catechetical Development (CCD) program.

“The overarching theme of the program is giving kids with special needs as deep and as rich a catechesis as possible. I love the way the Catechesis of the Good Shepherd uses materials and actual physical things that the kids could hold on to and manipulate. But I also think the CCD structured approach is helpful to kids with special needs because they thrive under a set structure. I blended those two models to come up with this program,” Chronister explains. 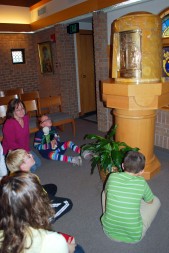 There are three levels of the program, similar to the Catechesis of the Good Shepherd. Level one traditionally is completed in one year. Level two may be repeated as many years as possible as ongoing faith formation. Level three is Confirmation preparation which traditionally lasts a year.

The curriculum of level one is sacramental preparation with the first half of the year devoted to preparing for the sacrament of Reconciliation and the second half preparing to receive the Eucharist.

“Michele works closely with parents in preparing the children for Reconciliation,” says Jensen. “Parents are the greatest advocates for their children and Michele wants to keep their trust and keep them informed. We have the kids write an examination of conscience ahead of time with their parents and the kids write down some of the things they are struggling with so that the priest can review it ahead of time.”

Level two explores the liturgical year and life in the Church. For example, during Lent many “hands on” materials help explain different stages of the season. “We use a Stations of the Cross storyboard (featuring pictures from the Stations of the Cross in St. Pius), we process with a crucifix when praying the stations together, we have a candle to remind us of the presence of the Light of Christ, and have a prayer box filled with various prayer and holy cards that are donated to us,” says Chronister.

Currently there are 12 children and one adult enrolled in the program.

Msgr. Bill Schooler, pastor at St. Pius X Parish, is very proud of the efforts of those working in the Children of St. Angela Merici ministry. The ministry of special needs children has a personal connection to his life. “The special needs program is near to my heart, because my youngest brother was Down syndrome. No one — not even our parish — had anything to offer for him at that time. I am glad we can make a difference now for people in similar situations.”