Reading the Bible cover to cover is a daunting undertaking. This year, to help Catholics and others to discover the richness of the Scriptures, Father Mike Schmitz, a priest of the Diocese of Duluth, Minnesota, launched a podcast called “The Bible in a Year” in conjunction with Ascension Press.

The podcast has reached millions of listeners and topped Apple’s podcast chart early in the year. Avid listeners like Marci Signorino appreciate being able to work their way through scripture and study God’s words through a Catholic perspective.

To share this with others, Signorino recently began leading a “Bible in a Year” study group at her parish, Queen of Peace in Mishawaka. A cradle Catholic, she admitted she hadn’t read the Bible much until a few years ago. She decided she wanted to study the Bible and after much prayer joined a Bible study at a nearby Protestant church.

The one thing missing, though, was a Catholic perspective. So, when she learned about the new podcast, she quickly subscribed. “I want to bring this to Catholicism,” she declared.

Since she had learned to listen to the word of God as a child at Mass, it made sense for her to study the Bible in auditory form. 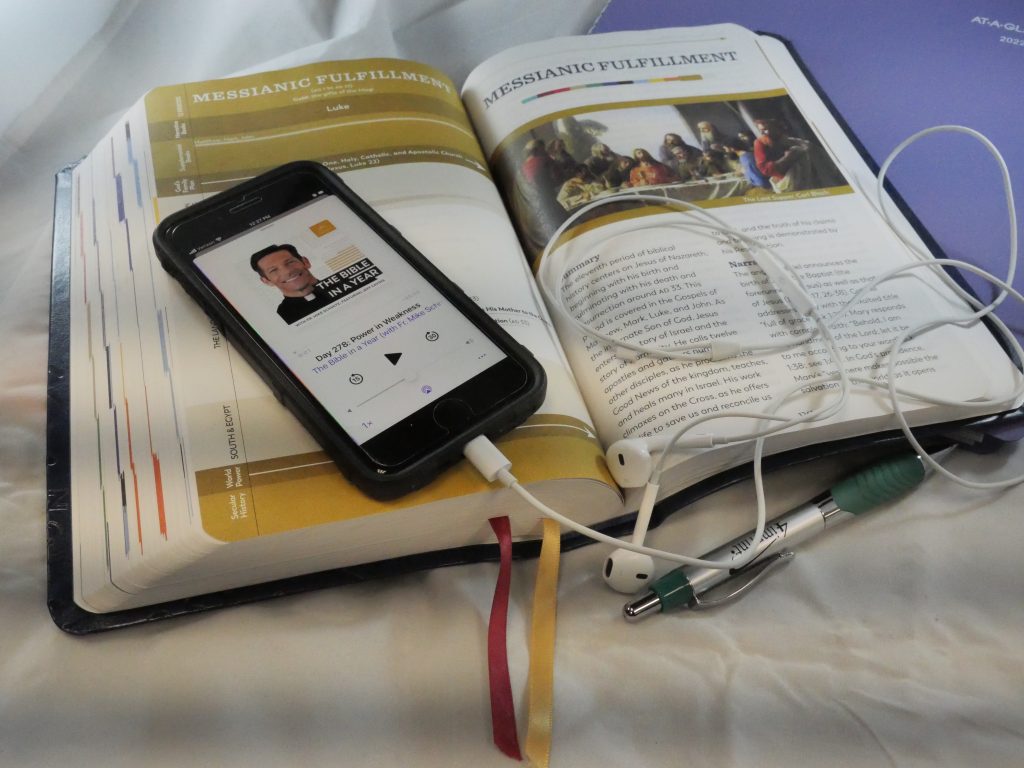 The format Father Schmitz follows involves reading specified Bible passages, followed by prayer. He then unpacks the readings, covering the historical background of the period and the significance of events. Daily readings follow the plan available for free through the Ascension Press website. The Great Adventure Bible, the version used in the program, also contains a timeline to make it easier to follow the lines of kings and events from Biblical times, particularly the Old Testament. As the podcast began on the first day of the year, it is nearing completion. However, all episodes are still available to stream for anyone who might have missed any.

That is what the group at Queen of Peace has been doing. They meet at the church every other Thursday for discussion. In the interim, members are expected to listen to 10 podcasts and come prepared to talk about the Bible readings and commentary.

In addition to “The Great Adventure Bible,” Ascension Press also offers the “Bible in a Year Notebook.” Ten of these were donated to the parish for group members. They use these to write out their own thoughts on the Biblical passages: what stood out to them, what they connected with and any special meaning behind the passage.

Father John Eze, pastor of Queen of Peace, advocates for all Catholics to read and study the Bible. He stated that when he came across the podcast, he wanted to make it available to his parishioners and “encourage them to use it.”

When Signorino approached him to lead a group study, he was more than willing to support her. The group began with eight members and has nearly doubled in successive meetings. Some members attend other parishes, while some are not even Catholic. Knowing that nonCatholics would be in attendance, Father Eze wanted to be present to offer his personal knowledge and Catholic perspective on the Bible. He has been at all the meetings and has been pleased by what he has witnessed.

“Here are people of different faiths coming together, and there has been not one moment of argument or debate. It is just people reading and enjoying the word that Scripture offers,” he commented. “They are discovering that the Bible is one long story. The prophecies in the Old Testament are fulfilled in Jesus.”

He says that he is most amazed by “the hunger that Catholics are showing to get into the Bible more, to study it,” as well as the “quality” of the responses from members of the group. “I wish more Catholics, more Christians would discover this program.”

Signorino often goes back to re-listen to previous podcasts and finds herself amazed by how much she learns each time.

“It has become the highlight of my day. It’s just amazing how it has uplifted me. I look forward to that.”

Father Schmitz’s explanations have given her a greater understanding of Scripture, not to mention amazement toward the interconnectedness of events, which ultimately lead to the coming of Jesus Himself, promised even from the first readings in Genesis. Viewing Abraham’s sacrifice of Isaac as a parallel to Christ “gave me goosebumps,” Signorino stated.

Even the manner in which Father Schmitz prays, as a son to a loving Father, has changed Signorino’s perspective on God. She remarked, “Now I think of Him that way, too.”

Another parishioner at Queen of Peace, Cathy Metcalfe, joined the group when it began meeting in early September. While she has been a part of other Bible study groups, “The Bible in a Year” covers the entire Bible, not simply one portion of it. “It is taking me to a deeper level in my Bible studies,” she said. “What I am enjoying the most is the in-depth explanation given – the underlying thread of salvation going all the way back to creation.”

Even with only a month of study under her belt, she has seen the connections between the Old Testament traditions and the Catholic Mass. One of the books she had very little understanding of previously – Leviticus – took on a deeper meaning when Father Schmitz explained the parallels between the Old Testament sin offerings and Jesus in the Eucharist. She stated, “It’s reflected in what Christ did for us as the ultimate sin offering. It’s so much more powerful now.”

Nancy Righter has had a similar experience in the group. She has also been in other Bible studies, so examining the Bible as a whole is what she most appreciates. She shared, “The main thing I have learned from the study was the overview.”

But there is more to the program than simply reading the Bible, Father Eze emphasized. “Reading the Bible is not just about reading, but about applying it to our lives.”

As everyone goes through life with their own trials and tribulations, he said the Bible provides guidance and consolation for everyday living. His hope is that the group will continue to grow as more and more people discover “The Bible in a Year” podcast and come to enjoy the fullness of the Scriptures.