It was 161 years ago today, on Feb. 11, 1858, that the Blessed Virgin Mary first appeared to the 14-year-old Bernadette Soubirous at the grotto of Massabielle near the village of Lourdes in France. It was the first of 18 apparitions. Bernadette did not know who she was until later. She described her to others as ‘the beautiful lady.’ She was beautiful in every way, not just physically. She was beautiful in the way she smiled at Bernadette, beautiful in the way she spoke to her with such tenderness and love. In that first apparition on Feb. 11, Bernadette first saw a light, then she saw the young lady who she said was “beautiful, more beautiful than any other.” She said that the lady was looking at her “as one person who speaks to another.” It was in this conversation that the lady instructed Bernadette to deliver certain very simple messages on prayer, penance and conversion. It is hardly surprising that Mary should be beautiful, given that during the last apparition on March 25, 1858, she revealed her name in this way: “I am the Immaculate Conception.” Is this not the greatest beauty of Mary of Nazareth, the Mother of Jesus? She was without sin from the first moment of her existence. She was preserved by God at the first moment of her conception from every stain of original sin. We call her Mary most holy. Her holiness was perfect. That’s why she’s the greatest of all the saints, the Queen of All Saints. That’s the patron title I gave to Bishop Dwenger High School some years ago, when I gave the patron title “Our Lady of Lourdes” to this high school. Marian already had Mary as its patroness, but I wanted you to have a particular title of Mary and a particular feast day to celebrate – so I chose today, Feb. 11, when the whole Church celebrates Our Lady of Lourdes. I’ll tell you later in the homily why I chose Our Lady of Lourdes to be your patroness. 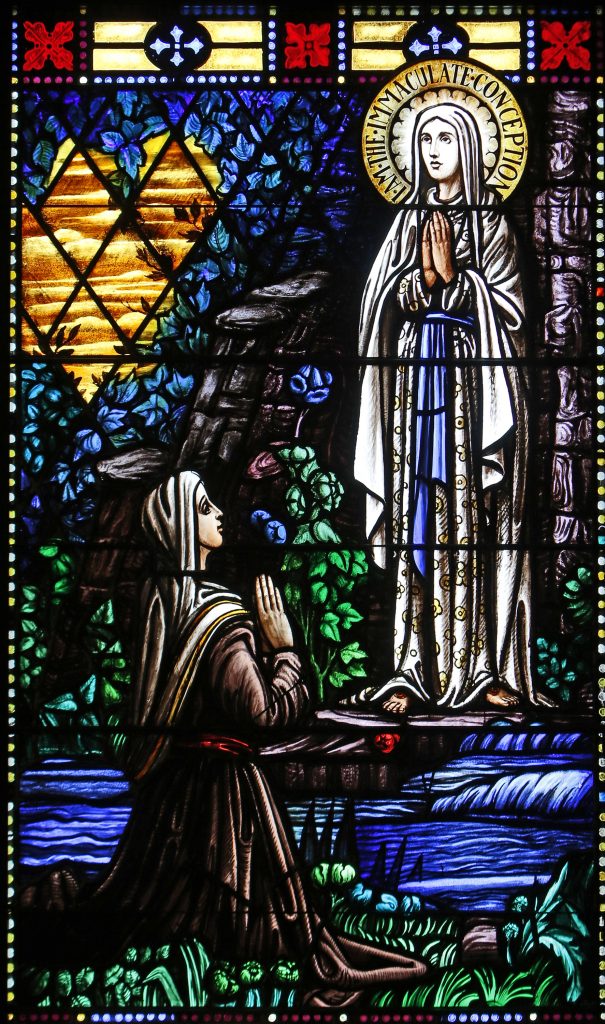 This stained-glass window at Our Lady of Lourdes Church in Malverne, N.Y., depicts Mary appearing to St. Bernadette Soubirous in Lourdes, France, as the Immaculate Conception in 1858. The feast of Our Lady of Lourdes is celebrated Feb. 11. — CNS photo/Gregory A. Shemitz

The young Bernadette saw the beauty of Mary. She experienced the beauty of her love. Bernadette was from a very poor family and had very little, if any, education. So, when the beautiful lady said to her: “I am the Immaculate Conception,” Bernadette had no idea what that meant. She had asked her who she was since the parish priest instructed her to do so. When she went back to him and told him that the lady said she was the Immaculate Conception, the priest was shocked. He then believed that Bernadette’s apparitions were true. He knew Bernadette could not have made this up.

What is beauty? Our culture tries to convince us so often that beauty is primarily physical, that people are beautiful if they have the best body figures, physique, hair styles, the coolest and most expensive clothes, whatever. Bernadette had none of those things. And she was the young woman Mary chose to reveal true beauty. God is the origin of all beauty and He made Mary beautiful by preserving her from original sin. Mary, the lowly handmaid of the Lord, was resplendent with the glory of her Son and the beauty of holiness. Mary invites us to walk with her along the path of true beauty, the way of the Gospel. She helps us to turn away from the ugliness of sin and to love the beauty that comes from the Holy Spirit, the beauty of living in God’s grace.

We heard in our first reading from the book of Genesis the famous Proto-Evangelium, the first Gospel, the first announcement of the Good News of salvation. God says to the serpent: “I will put enmity between you and the woman, and between your offspring and hers; her offspring will strike at your head, while you strike at their heel.” There is this eternal enmity, absolute hostility, between the woman and her offspring, on the one hand, and the serpent and his offspring, on the other. Mary and her Son are the irreconcilable enemy of Satan and his minions. This wouldn’t be if she had in her any stain of sin. The absolute hostility put between the woman and the devil demands in Mary the Immaculate Conception, that is, a total absence of sin, from the beginning of her life.

It was Mary’s offspring, Jesus, who struck at the serpent’s head when He conquered sin by His death on the cross. That was the definitive victory over Satan. And His mother was there when that happened, as we heard in today’s Gospel. Mary stood at the foot of the cross. We can only imagine her pain. She wasn’t just a bystander on Calvary. She shared in her Son’s suffering. She participated in it. And it was there at the cross that Jesus gave His mother to us as our mother. In the very act of our redemption, He gave us the special gift of His mother, to help us to renounce Satan and all his works and empty promises. He gave us His mother to help us by her example and prayers of intercession to be His faithful disciples, to reject the ugliness of sin and to live in His love and grace.

It’s interesting when I have spoken to exorcists about their experiences during exorcisms. They tell me that the demons hate Mary and are afraid of her. And her intercession is very powerful during exorcisms. In the ritual of exorcism, the priest says to the demon or demons: “The mystery of the cross commands you, and the power of all mysteries of the Christian faith. The exalted Virgin Mary, Mother of God, commands you, she who in her lowliness crushed your proud head from the first moment of her Immaculate Conception.” Exorcists tell me that the demons react very strongly and angrily, especially if they invoke Our Lady of Guadalupe, Our Lady of Lourdes, or Our Lady of Fatima. One exorcist said that he finds it very effective when he does this. It seems that Satan panics at Mary’s appearances because of all the good and holy fruits of those appearances.

Mary’s holiness, her friendship with God, makes her Satan’s number-one enemy because there is this profound enmity between her and the serpent. We read about this not only in the first book of the Bible, but also in the last book of the Bible, the book of Revelation. In the second reading at this Mass, we heard about the woman clothed with the sun. The woman of the Apocalypse reflects the radiance of God, the divine splendor. Light emanates from her, like in the apparition at Lourdes, because she is filled with God’s light, with her Son’s grace. She wears on her head a crown of 12 stars which represent the 12 tribes of Israel and the 12 apostles, the entire people of God, the whole communion of saints. Remember she is our queen as well as our mother. At her feet is the moon, the image of death and mortality. The huge dragon in the book of Revelation is the ancient serpent in the book of Genesis, the devil returned. He tries to devour her newborn Son, but is unsuccessful.

We also then heard in the reading about the war that broke out in heaven. The dragon and its angels were defeated by Michael and his angels. Satan and his angels were thrown down to earth. And then there was a celebration in heaven, where they rejoiced that the accuser was cast out and conquered by the blood of the Lamb. But notice the words at the end of the celebration. The voice said: “Woe to you, earth and sea, for the devil has come down to you in great fury, for he knows he has but a short time.” We live in that time – the time between Christ’s resurrection and His return in glory. Though the dragon has been defeated by Christ, he is far from harmless and is capable of making things very difficult for disciples of Jesus. We must battle against evil. The conflict between Satan and the human race continues throughout human history. The disciples of Jesus are still pursued by the dragon. We heard at the end of today’s reading: “Then the dragon became angry with the woman and went off to wage war against the rest of her offspring, those who keep God’s commandments and bear witness to Jesus.” That’s us!! That’s why I encourage our parishes and schools to pray the Prayer to St. Michael the Archangel to defend us in battle and to be our protection against the wickedness and snares of the devil. And I encourage all to be devoted to Mary, our perfect model of holiness. It is important that we ask her to help us to persevere in the grace of God. We say to her: “Holy Mary, Mother of God, pray for us sinners now and at the hour of our death.”

Finally, I said I would share with you why I designated Our Lady of Lourdes as your patroness here at Marian. There are many titles of Our Lady, as you know. I chose this title and this apparition for a number of reasons. No. 1 – There’s no other institution in our diocese with this patronage. No. 2 — It’s very connected to the patroness of our diocese, the Immaculate Conception. No. 3 — St. Bernadette was a teenager, like you, when she received the apparitions. No. 4 — I think Lourdes is one of the holiest places on earth; not only a place of many miracles and favors, but a place of great spiritual fruit, where so many pilgrims experience God’s love and mercy and tender care through Mary and her loving intercession. No. 5 — Every time I’ve been to Lourdes, four times, I see not only hundreds or thousands of sick and disabled people, but also many, many young people who go there to pray and to serve and help the sick and the suffering and the poor. They are following the example of Christ the servant, something that you are learning to do here at Marian High School. And No. 6, I chose Our Lady of Lourdes because I want you to learn, like St. Bernadette learned from the beautiful Lady, that none of you are unimportant in God’s eyes. He directs His loving gaze upon each one of you and He calls you to a life that is happy and full of meaning. Mary will help you, like she helped Bernadette, not to be discouraged by life’s difficulties. And Mary teaches you, like she taught Bernadette, not to be afraid to say yes to the Lord’s call, like she did, and to walk in the footsteps of her Son. She shows us what is truly beautiful, living the Gospel of her Son. She teaches us to believe, to hope, and to love.

May Our Lady of Lourdes watch over each one of you and the Marian community with her love!