VATICAN CITY (CNS) — Taking time out each day to be thankful for God and His gifts will lead to greater joy and mark a great step forward for humanity, Pope Francis said.

Mary, the mother of Jesus, “acknowledges that she is small and exalts the ‘great things’ the Lord has done for her,” the pope said before praying the Angelus Aug. 15, the feast of the Assumption of Mary.

With her assumption — body and soul — into heaven, she “gives us hope,” he said.

“We understand that we are precious, destined to rise again. God does not allow our bodies to vanish into nothing. With God, nothing is lost!” he said to those gathered in St. Peter’s Square.

“In Mary, the goal has been reached and we have before our eyes the reason why we journey: not to gain the things here below, which vanish, but to achieve the homeland above, which is forever. And Our Lady is the star that guides us,” he said. 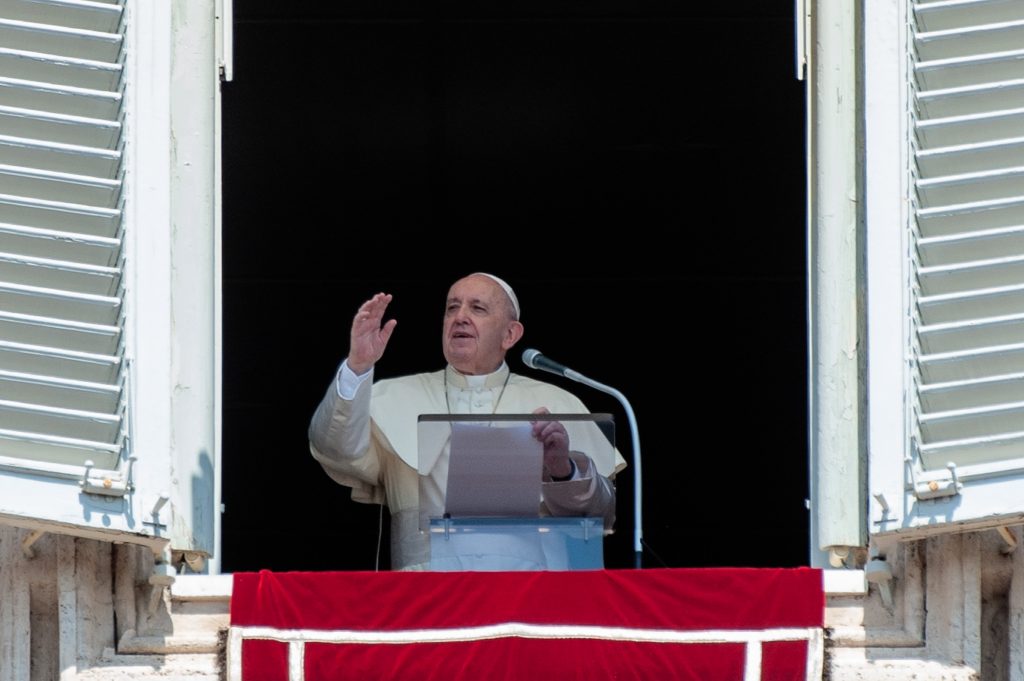 Pope Francis offers a blessing from a window overlooking St. Peter’s Square at the Vatican during his Aug. 15, 2020, Angelus on the feast of the Assumption of Mary. (CNS photo/IPA/Sipa via Reuters)

In fact, Mary’s assumption into heaven represents “an infinitely greater conquest” than putting a man on the moon, he said.

The pope recalled the famous phrase by Neil Armstrong when he became the first human being to set foot on the moon, saying, “That’s one small step for man, one giant leap for mankind.”

With that event, the pope said, “humanity had reached a historical goal. But today, in Mary’s assumption into heaven, we celebrate an infinitely greater conquest” in which Our Lady has “set foot in paradise.”

“She went there not only in spirit, but with her body as well, with all of herself. This step of the lowly Virgin of Nazareth was the huge leap forward for humanity. Going to the moon serves us little if we do not live as brothers and sisters on Earth,” the pope said.

Mary wants people to “magnify” God by putting Him first, and not focusing first on one’s problems or difficulties, he said.

This approach leads to great joy, he said, not because problems have vanished — they don’t — but because one knows that God is present, close and can help.

“The Lord works wonders with those who are lowly, with those who do not believe that they are great but who give ample space to God in their life. He extends His mercy to those who trust in Him, and raises up the humble,” the pope said.

Just as Mary praises God for this, people should remember to praise and thank God for the great things He does and for each day He gives.

The pope asked if people remember to thank God for always loving and forgiving them and “for His tenderness? In addition, for having given us His mother, for the brothers and sisters He puts on our path, and because He opened heaven to us?”

If people forget all the good things in their lives, their “hearts shrink,” but if, like Mary, they remember and “magnify” God with praise, “then we would take a great step forward” and “our hearts will expand, joy will increase.