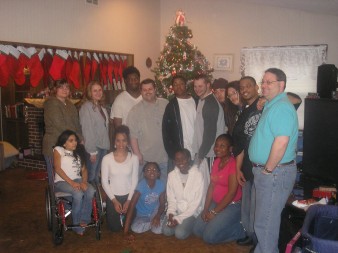 Angel in Adoption award winners Theresa and Mike Teders’ family of three biological and 13 adopted children include in front from left Jessica, Shawna, Javani, Jasmine and Kaneshia. In back are Amanda, Kristina, Matthew, Cameron, Joe, Jon, Steven, Joshua, David and Mike Jr. Two children, Richie, who died in 1988, and Derrick, who is in North Carolina, are not shown.

FORT WAYNE — Mike and Theresa Teders will be the first to say that adoption is a choice to love. They should know — they have raised 13 adopted children, along with four biological children. Their extra large family includes children with physical, emotional and intellectual challenges.

This year the Teders, nominated through Catholic Charities, were selected as an Angel in Adoption by U.S. Rep. Mark Souder (R-3rd) for their outstanding advocacy of adoption.

The Congressional Coalition on Adoption Institute (CCAI), which sponsors the Angels in Adoption program, honored the Teders and over 190 other Angels from around the country, at an awards ceremony in Washington, D.C., in September.

The Teders, both Fort Wayne natives, have known each other for many years through a long standing family friendship. Both families were community service minded, and Theresa recalls her parents fostering several children along the way. The two began dating after high school graduation and were married in Queen of Angels Parish in 1973.

Their family grew exponentially as their children, Michael, Jr., Richard, Cameron and Jon were born. Unfortunately, Theresa experienced two miscarriages and by the time Jon was seven, the couple agreed, after much thought and prayer, that it was time to begin their adoption journey.

After living in several places including Dallas, Texas, the family came home to Churubusco only to learn that their third son Richie had contracted HIV while recovering from a car accident. Adoption plans were put on hold as they cared for their son. He later died and as their church and community rallied to support the grieving family, the Teders found strength and purpose again.

And in 1988 after perusing state adoption books, the couple felt called to adopt a sibling group of three. “We saw the picture of the three and they spoke to us,” recalls Theresa, who adds that she and her husband look for sibling groups as “they are the ones that wait.”

The family of eight grew to nine when in 1989 the Teders adopted a one-year-old biracial boy with health issues. After the baby’s adoption they moved to Fort Wayne and became even more invested in adoption advocacy. Theresa became a local representative for the state adoption’s local chapter. She and Mike assisted with the development of a registry of children who were available for adoption.

As the couple perused the state books, they discovered a sibling group of five, four boys and one girl, who were threatened with being split up. The tenacious Teders again felt drawn to the children. Mike recalls, “We started talking about them. But realized we didn’t have a table big enough to put all these kids.”

But with their extended family’s support, including a brother who made a table large enough for 12 children, the Teders went forward with the adoption. Melding and raising all of these children, several with special needs, was not always “roses and light,” says Mike, who adds, “But we always came out the other side.”

Family remained the focus of this committed couple throughout the hardships of investigating services for their children’s special needs as well as educational opportunities and just being a family. Each of the children came from a different environment with different ways of doing things. “It was a learning process for us all,” says Theresa.

Then in 1993, a baby girl with spina bifida, was welcomed into this loving family that treated all its children the same. She was expected along with all her siblings to complete her chores and respect the others. “No challenge gives you a free ride in this country. We always tried to embed that in our kids. There are consequences to all actions,” says Mike.

The importance of family was always encouraged. “We taught them not to give up on family because rough stuff comes along,” says Theresa. All the children earned their high school diplomas or equivalencies, and many attend or have graduated from college.

In 2003 the Teder clan grew again — this time with three teenage sisters who joined the family. The Teders family boasts 17 children, and 14 grandchildren, all unique in their own way. When asked why so many, Theresa replies peacefully, “It’s what we were supposed to do.”

She and Mike agree that their faith has seen them through the joys and sorrows of this incredible journey of parenting. Always involved in church life, including marriage encounter, the Teders, currently members of St. Vincent de Paul Parish, believe God has not only led them but supported them through the years. “They’re my kids,” says Theresa wistfully. “I wouldn’t change anything even with all the problems. Through it all, I would still say yes to all of the kids.”

As for the Angel in Adoption Award, the Teders say that it is an honor. “If one more child finds a home, then it makes telling our story worth it,” says Theresa, as Mike adds, “It takes more than love to adopt. Especially when you take special needs, the word commitment is huge! …  With adoption you have a family!”