She was 22 years old as a 1969 graduate of Indiana University South Bend. From there, she would go on to devote the next 50-odd years to instilling knowledge and morals into the minds of hundreds of young children in northwestern Indiana.

Joann Johnson has taught at St. John the Baptist School in South Bend for the past eight years, but her passion for teaching did not begin there. For a total of 48 years – 19 spent within the Diocese of Fort Wayne-South Bend – she has taught some of the youngest and most impressionable pupils: second-grade and younger. Now, at the age of 74, she has decided to retire. 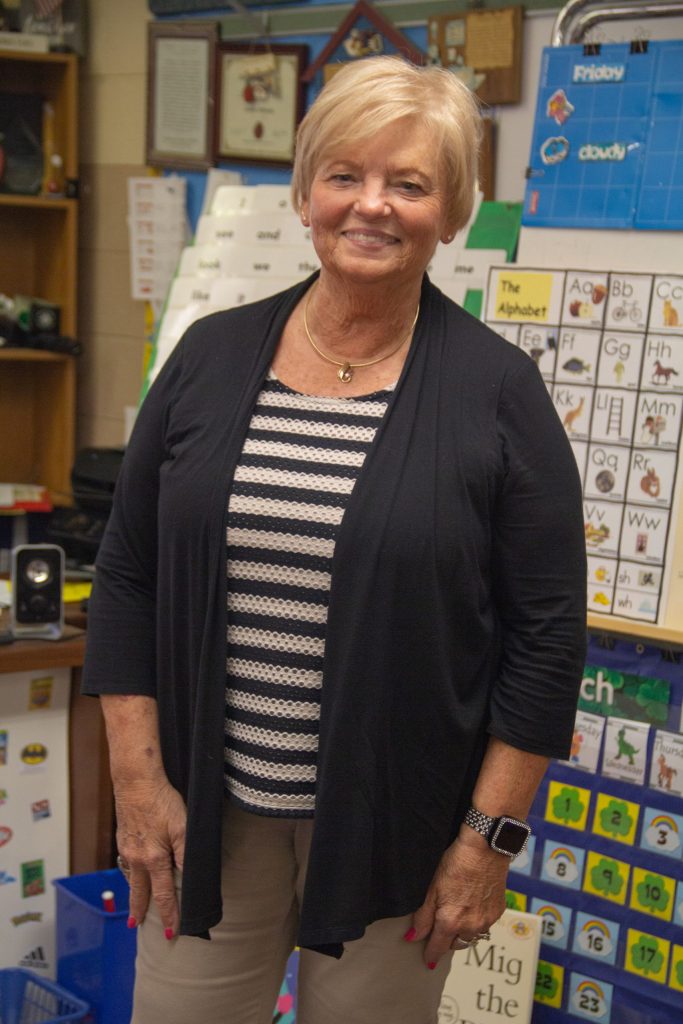 Samantha Rohloff
Joann Johnson, kindergarten teacher at St. John the Baptist School in South Bend, speaks fondly of her many decades in the classroom and the things she has learned from her own students.

This choice wasn’t an easy one to make, though; she had been “tossing it back and forth,” she said. But finally at peace with her decision, she explained, “I’m moving to another chapter of my life.”

Teaching second-graders at St. Anthony de Padua School in South Bend was her first teaching job out of college, but deep down, she had always longed to teach kindergarten. She took a break from teaching for a few years once she became pregnant, but she still worked as a substitute teacher during that time. When she officially returned to education, she was excited to go back to St. Anthony de Padua and start their kindergarten program herself.

She spent a total of 11 years at that school, and from there she moved to LaSalle Elementary School in Mishawaka for a year and then to Beiger Elementary School in the same city for the next 28 years. With joy, she finally returned to Catholic schools and has worked at St. John the Baptist ever since. There, she has taught mixed classes of both first-grade and kindergarten, as well as first-grade and preschool. For the last three years, she has taught solely kindergarten.

Education has also had a huge impact on her family. Her husband, John, has worked as a substitute teacher, and her two daughters, Michelle and Lisa, have become teachers too.

Johnson has come full circle, she said, going from Catholic to public back to Catholic schools. Initially, she was supposed to permanently retire from teaching after leaving Mishawaka schools, but there were other plans at work.

“I honestly have no clue what made me go on the diocesan website,” she said. “I just went on my computer one day, and it was this job opening here. Kindergarten. And I just thought, God is telling me I’m not ready to quit; I need to keep going.”

Between public and Catholic schools, the latter is definitely her home. “Being a cradle Catholic, I’ve lived my life with the Church, with all the true meanings of the holidays, and it’s just so nice to instill that in the children,” she said. She also noted how it was difficult not to teach religion at a public school.

Altogether, Johnson has taught kindergarten for 47 years straight, adding that students in her first kindergarten class would now be 52 years old. But the many years have not dulled her enthusiasm for these kids and their achievements.

“There is such joy in what they accomplish,” she said. “It can be the simplest thing as learning to hold a pencil correctly or learning to skip.” She said it’s “like a lightbulb goes off, and it’s so exciting.”

Her favorite subject to teach is reading. “To see them picking up a little book out of their book bin and being able to read by themselves is really, really amazing,” she said. “We teach them how to read, and some just blossom. Others struggle, but when they’re so excited about what they’ve read or they can tell me, ‘Oh, I think this is going to happen in the story’ … I treasure that.”

It was evident that even as a child, she was called to be a teacher. When Johnson was born, her older brothers were already teenagers, so when they had children of their own, Johnson’s nieces and nephews were more like her sisters and brothers. When she babysat them, one of their favorite games to play was school – Johnson as the teacher and her nieces and nephews as her students. “And they still talk about it as adults,” she recalled fondly.

It was also as a student herself at St. Anthony de Padua where one of her seventh-grade teachers, Arlene Fleischaker, kindled Johnson’s passion for teaching.

“I would stay after school every day, clean the room, do anything she wanted … She always just made me feel like this is what I need to be doing. And I ran into her over the years, and I would always tell her she’s pretty much the reason that I became a teacher because she made me feel like, ‘Yup, that’s what I need to be doing.’” Fleischaker, later Cerney, passed away earlier this year at the age of 89.

There is no doubt that Johnson is an expert in her field, but there’s always more to learn. In fact, her students also instruct her. “Patience,” she said emphatically, is what they have taught her the most. Teaching children can get stressful, and it is this same fruit of the Holy Spirit that Johnson advises other teachers to cultivate.

“Patience is the biggest thing – you have to be patient.” She added: “Know your limitations. You can’t be everything to everyone … Do what you can do, and don’t think you’re a bad teacher because you can’t do it all.”

And if decades of putting others first wasn’t enough, she said that when she leaves her classroom for the last time, every ounce of its items – decorations, tools, etc. – will remain behind. Not so she can forget her work and students, but so the next teacher who enters the space will have everything they need.