Teaching in a Catholic school means much more than ensuring good grades in the classroom; as MaryAnn Hinora knows, it also means personifying Christ’s self-giving love to one’s students and school community. At Marian High School in Mishawaka, Hinora has lived out a 25-year teaching vocation through acts of service to others.

A graduate of Marian herself, Hinora enjoyed her educational experience so much that she came back to teach theology in 1995 and has remained. She was influenced in her decision to return to her alma mater because “I knew how much the teachers really cared for their students. I knew it would be a good fit.” 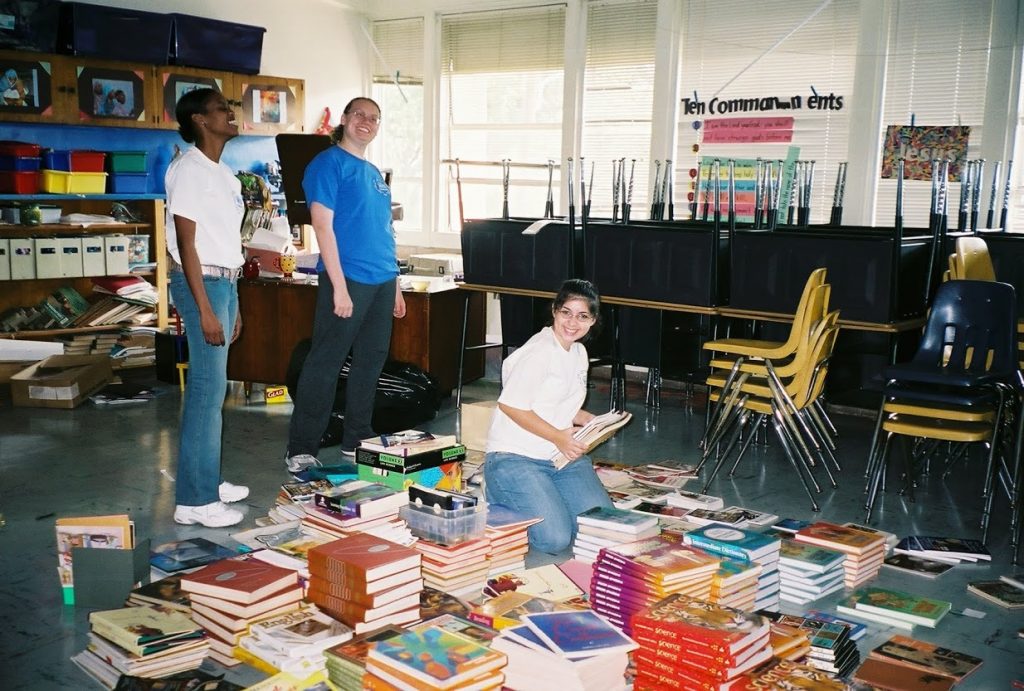 Photos provided by MaryAnn Hinora
MaryAnn Hinora, center, a theology teacher at Marian High School, Mishawaka, leads students on a mission trip to New Orleans in 2005 after the devastation of Hurricane Katrina. Hinora lives her faith most vibrantly through service to others.

She is proud of the multitude of service projects she has been involved with at Marian over the years, including hurricane relief after both Katrina and Rita and attending the annual March for Life in Washington, D.C., with her students. Additionally, she has taken part in food and diaper drives for the Women’s Care Center, Hannah’s House and the St. Vincent de Paul Society.

“When we say, ‘Once a Knight, Always a Knight,’ we mean it,” Hinora said. “It is not just word play. I have seen the school come together to do incredible things, whether it be for a student, parent, teacher, staff member or the community in general.” 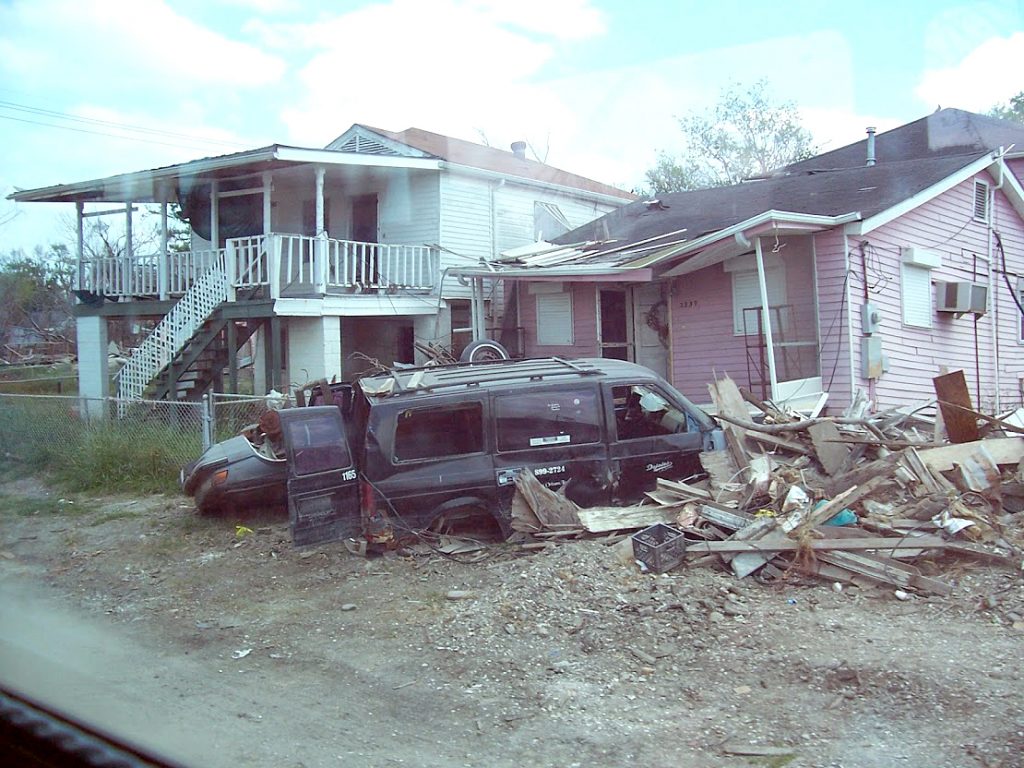 The destruction from Hurricane Katrina was widespread throughout the Gulf Coast states, causing extensive damage to homes and other property in places like New Orleans.

The most memorable of these projects was a mission trip to New Orleans. Hinora explained that some families displaced by Hurricane Katrina in August of 2005 moved to the South Bend area and sent their children to Marian. According to Hinora, Sister Marie Morgan, head of the theology department at Marian, then organized an effort to bring students to New Orleans to help clean up two Catholic high schools there that sustained damage in the hurricane, St. Augustine High School and St. Mary’s Academy. Marian’s principal at the time, Carl Loesch, and the diocese both granted permission for the mission trip. Then, the planning hit a snag. “Everything was going well until one month before we were going to leave for New Orleans,” Hinora said. At the last minute, their projected host family informed the school that their home rebuild was behind schedule and they could not host the students.

“As soon as we let people know we needed help, the funds came pouring in. Parents, teachers and many others were donating money and even food for the trip.”

The trip was amazing, Hinora said. She expressed her admiration for the students who desired to help others in desperate need. One of the families that had temporarily transferred to Marian soon returned to New Orleans and “made us part of their family.”

One night, the mission group had an authentic New Orleans meal with a group of families, who shared their stories of the storm. 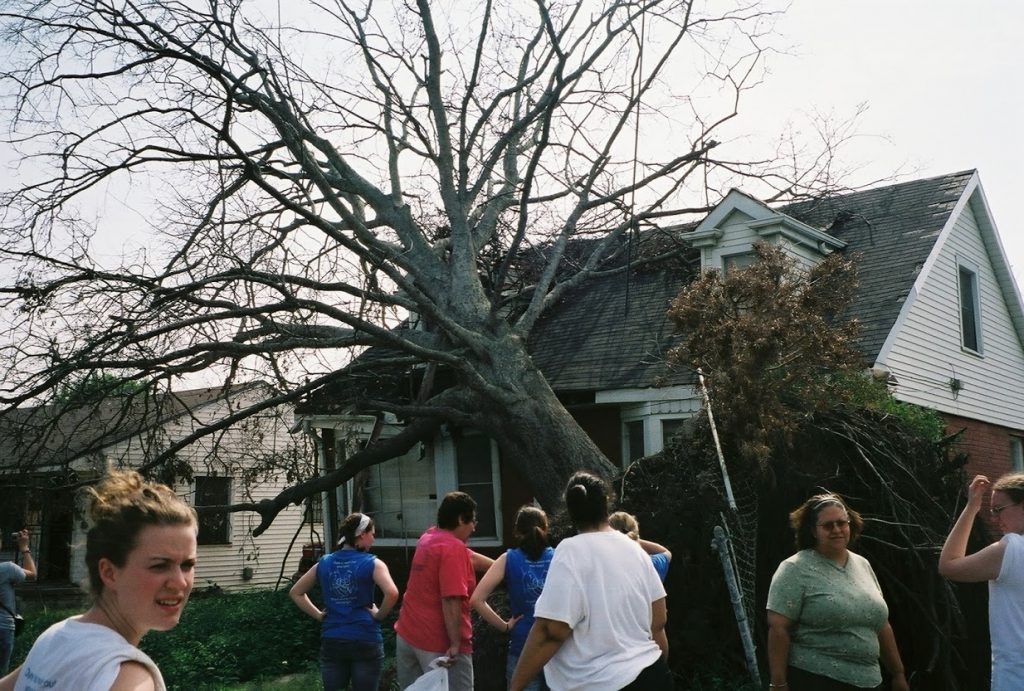 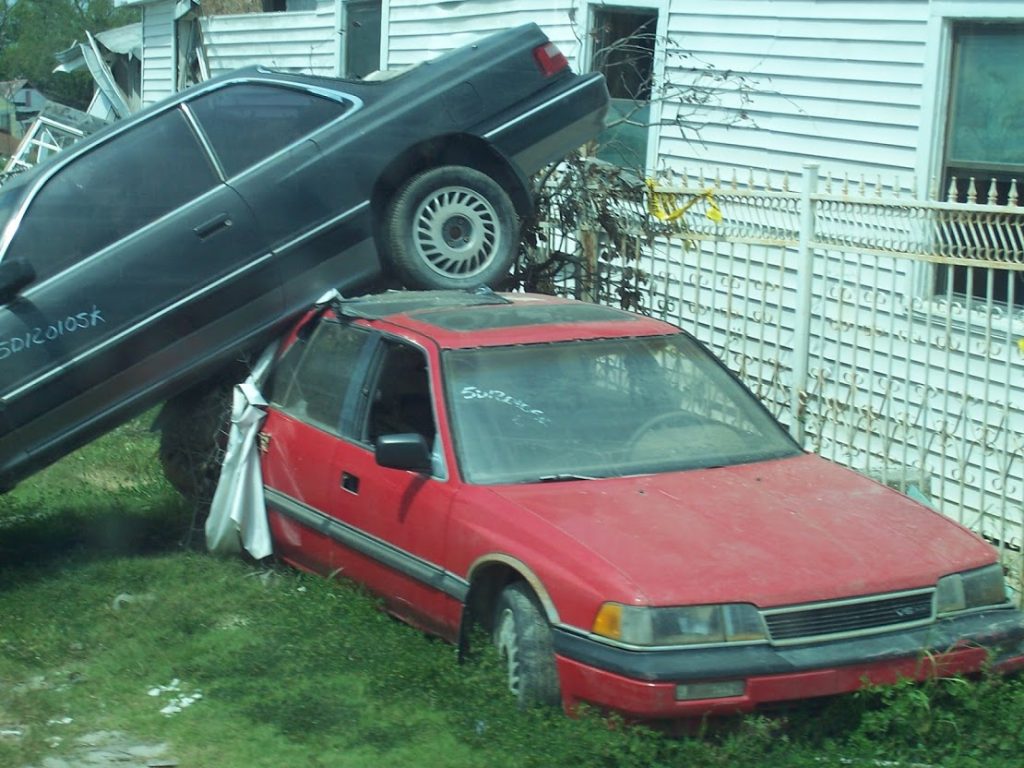 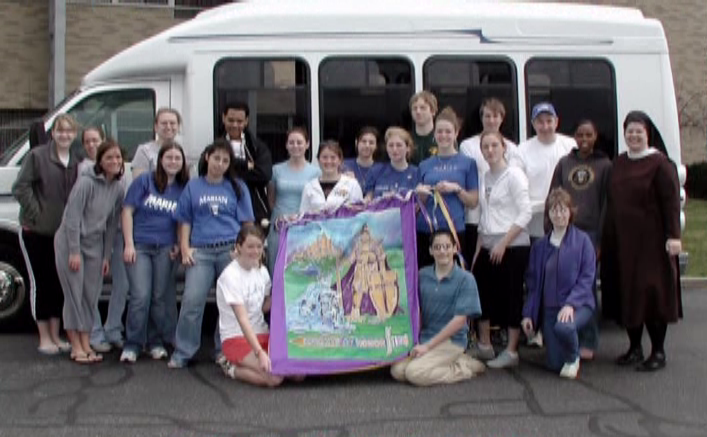 Hinora knew she was called to teaching when she attended World Youth Day in Denver in 1993. “During the event, I had one of those deep conversations with God, and I asked Him what He wanted me to do with all my gifts and talents. Through a series of events, I was led to the University of Dayton’s program for teachers of high school religion and I was on the road to a master’s degree in theological studies and a career.”

When it comes to teaching the Catholic faith, Hinora comes from a long line of storytellers. She shares the faith through her own stories and by allowing her students to share their stories with her.

“I am blessed to be able to pray for and with my students. I tell them that every night since I have started teaching, I have prayed for all my students — past, present and future.”

For Hinora, service to others is not limited to Marian. She cares for her elderly parents, who celebrated their 65th wedding anniversary in September. Along with her parents, she is also an active member of St. Jude Parish in South Bend.

When Marian principal Mark Kirzeder announced at Mass in December that Hinora had earned the Christ the Teacher award, she said she was “surprised and humbled.” Of his school’s awardee, Kirzeder said: “MaryAnn Hinora is the true embodiment of Marian High School’s mission statement in that she ‘strives to live the example of Jesus Christ as teacher and servant’ at all times.”

“Ms. Hinora is always seeking new opportunities to further her own education so that she can better pass on the Gospel message to Marian students,” Kirzeder said. “She is respected by her colleagues and is a vital part of the Marian family. We are blessed to call her a Marian High School teacher.”

For the foreseeable future, Hinora has no other plans than remaining at Marian, continuing to teach and guide young people in their faith journeys.