Teaching in Catholic schools was something Kurtis Homan said he kind of fell into as a young graduate of the University of Saint Francis. He never expected to spend nearly 20 years in two Catholic schools in Fort Wayne, nor to see his efforts earn him the schools’ Light of Learning Award not once, but three times. This year marks the fourth time he has been given the now-renamed Christ the Teacher Award, this time as a fifth grade teacher at St. Joseph – Hessen Cassel. He remains humble through it all.

“I grew up on a farm in Jay County and I was always going to farm,” Homan stated. His family were farmers, and his parents did not have college degrees. When he realized, as a high school junior, that farming meant working full-time with his father, his plans turned to teaching. “It was always teaching.”

He chose the University of Saint Francis partly for the football program the university was forming at the time. After he completed his student teaching, Marsha Jordan, then the principal of Queen of Angels School, called the university to ask if they had a recommendation for a long-term substitute teacher to cover middle school math for a teacher preparing for maternity leave. Homan took the job. 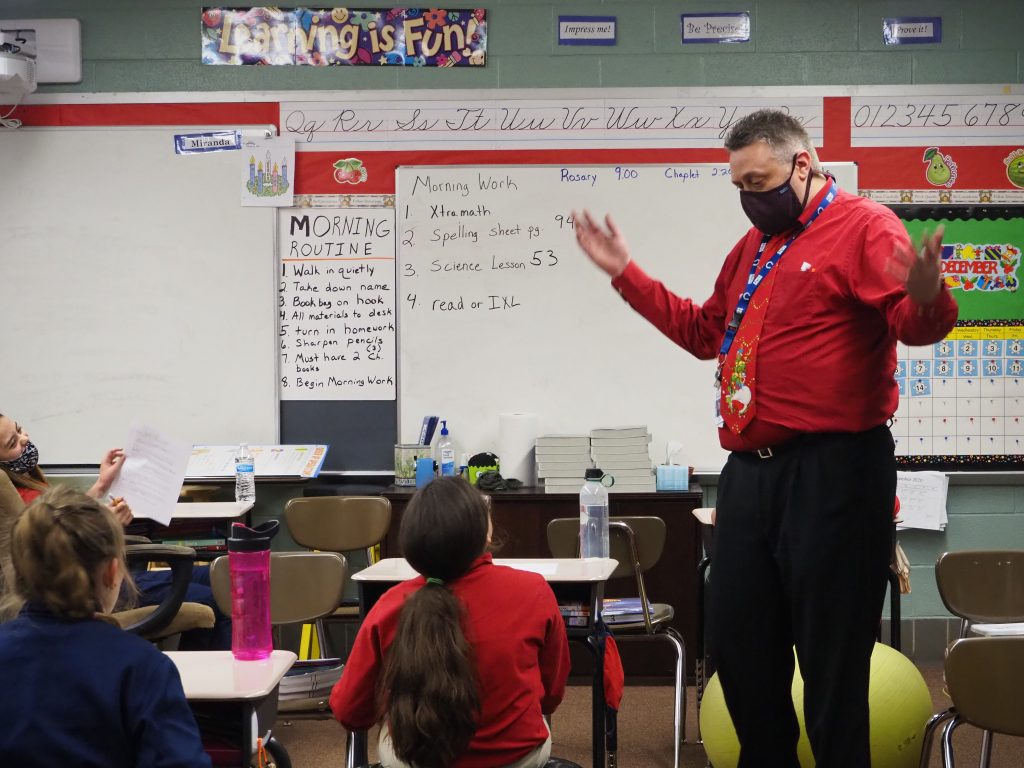 Jennifer Barton
Kurtis Homan teaches fifth grade students about U.S. history at St. Joseph – Hessen Cassel School, Fort Wayne, in December. Homan’s focus has always been squarely on his students: Everything he does is for them, he says.

Once that substitute position ended, another teacher at the same school took leave due to an injury. Homan took over third grade. The same teacher decided to take the next year off, so he continued in the position. When that teacher decided to retire, his future at Queen of Angels was sealed. “So, I went from Friday student teaching to Monday middle school math at Queen of Angels. It was no days off, nothing. I did have one day off between middle school math subbing and the third grade.”

He spent 14 years at that school before taking a position at St. Joseph – Hessen Cassel, where he has taught for the last five years.

Jay County, where Homan grew up, does not have a Catholic school. Homan was a product of public education and once-a-week religious education classes. So, taking over third grade provided an interesting challenge when it came to teaching religion.

“I was just amazed at how much third graders knew about the Catholic faith compared to me, who just went to my hour-a-week CCD.”

He took it upon himself to learn more about his Catholic faith. He started by studying the class textbook. For increasing his knowledge, he credits Jordan with implementing retreats that helped teachers deepen their faith. He also received the assistance of the parish pastors where he has taught.

“I always say God put me right where He wanted me and He has not let me leave ever since,” Homan remarked. 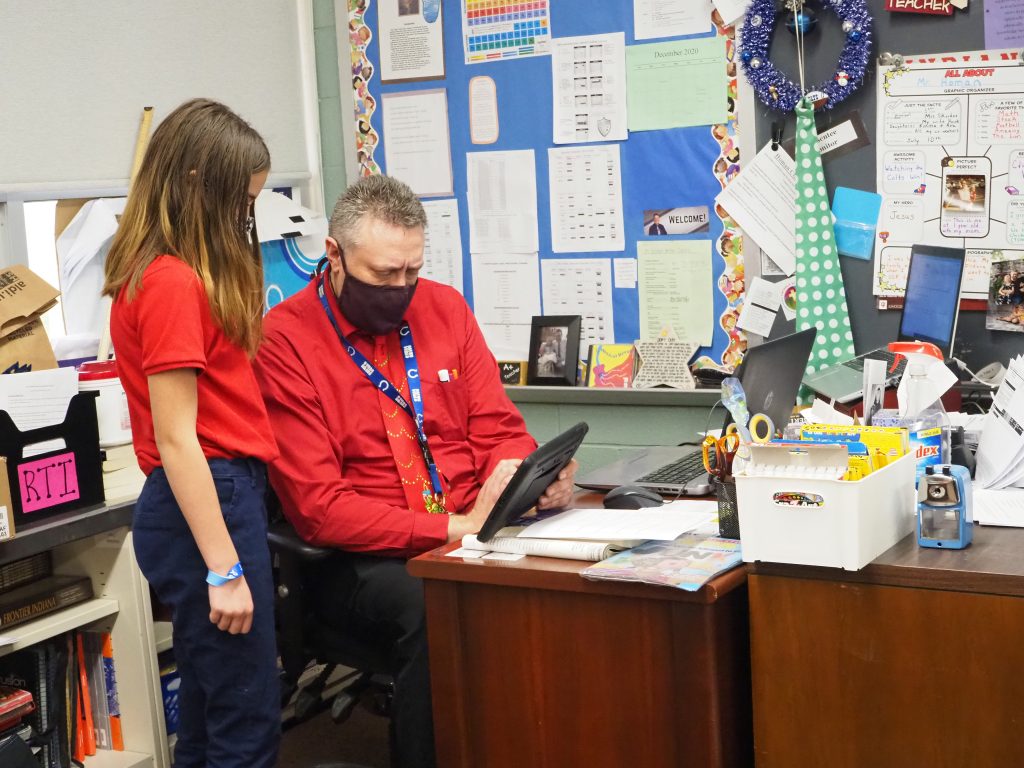 He feels blessed to have worked in smaller schools with family environments. “Honestly, I don’t know how I could go teach in a public school now, because for me, everything we do is part of … even when we’re doing math, somehow Jesus comes up all the time, no matter what. When we’re doing science, when we’re doing social studies – everything.”

Giving of himself as a teacher included continuing his duties even when stricken with COVID-19. He called March 13, the day the schools shut down, “one of those dates that will live in infamy for me.” He relates how he contracted the virus around that time but made voice recordings of his lessons for the students’ use. He made a full recovery and is pleased to report that the school has continued throughout the fall semester without any missed days.

One of the more memorable moments of his teaching career was when he received a thank-you note from a student at Queen of Angels. This student was one of his more “difficult” pupils, and Homan pushed him hard to accomplish what he needed to do.

The student left the note at church to be delivered to Homan, which said “how much he respected and … appreciated” what Homan did for him. “I still have that note; it’s kind of a neat thing. I wish it happened more often.” 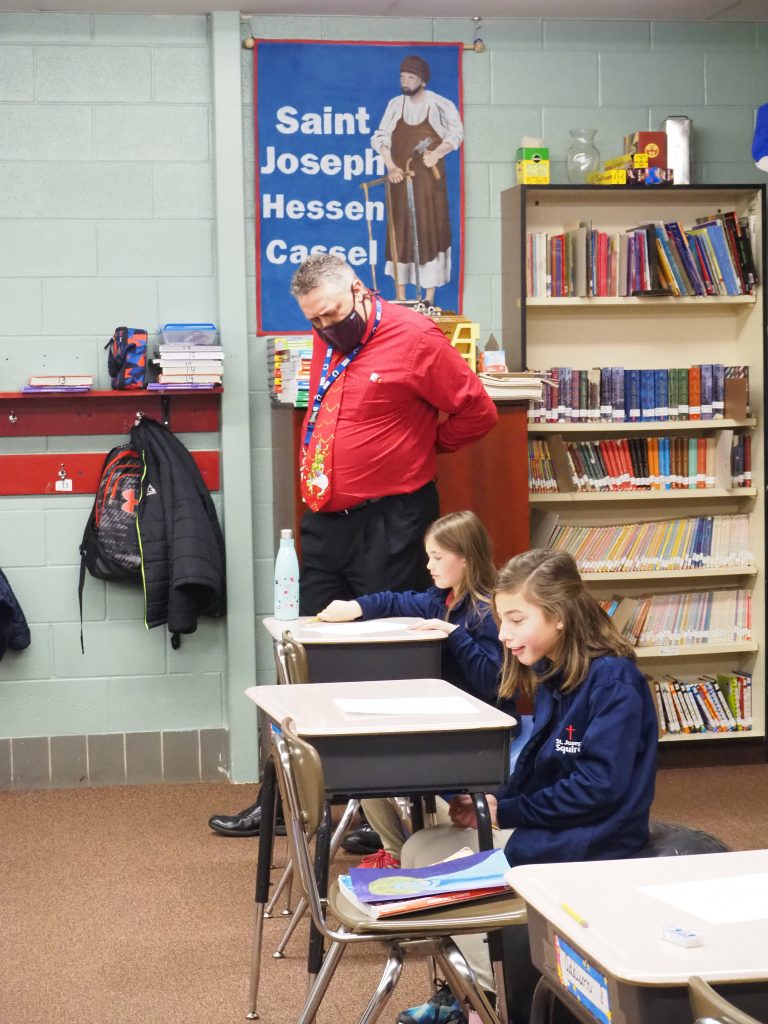 His preferred subjects to teach are math and social studies, and he enjoys teaching both Indiana history in the fourth grade and U.S. history in fifth. His classroom is set up with stability balls instead of regular desk chairs, and students look forward to that. Over his many years of teaching, he has had to change the style and methods he uses to keep students engaged.

Homan’s greatest concern during the pandemic is the emotional well-being of his students. He is grateful to be back in the classroom environment, where he believes students need to be.

Working and learning together is something that Homan is a big advocate of and, while he only has a class of 13 pupils this year, it has been a struggle for him not to utilize those small group activities that he feels are an immense benefit to the students.