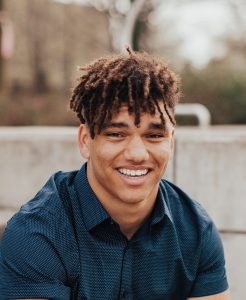 Because he attended a Catholic high school, McGarry was able to participate in myriad opportunities for enriching his faith, including all-school Masses, lunchtime opportunities for confession and hourly prayer before class. The entire experience shaped his character and allowed him to hone his study and time-management skills, too.

McGarry’s faith, which was instilled through formal education at St. Jude School and Bishop Dwenger, both in Fort Wayne, and at home, influenced the many ways he dedicates his gifts and talents to God’s service. He assists at Vincent Village, The Franciscan Center, the Rescue Mission, Community Harvest Food Bank, Associated Churches Warehouse, GiGi’s Playhouse and the Euell Wilson Center. He also tutors at the Brandon Foundation.

“I have been an auxiliary member of the St. Jude Social Action Committee since I was in elementary school. I’ve aided in organizing church events with this committee,” he said, demonstrating his passion toward caring for the Earth and its people. Because of these experiences he plans to major in environmental chemistry and be a field researcher in global sustainability at Columbia University in New York City this fall.

A football aficionado, McGarry played on Bishop Dwenger’s team all four years. He eventually served as team captain, earned his third varsity letter and assisted in his team’s 4A State Championship win in 2018. He also ran track sophomore through senior years, serving as a team captain for the 2018 season and being named Academic All-State in track and field that year as well. He was a member of Student Council for all four years. In McGarry’s junior year, 2017-18, he was student body vice president and was elected president his senior year.

His pastimes include cooking, especially for and with his family. McGarry said that “with all of our busy schedules, it’s nice at times to laugh and spend time together making and then eating meals.” He and his father have intellectually stimulating conversations over these meals, he said, often discussing history and debunking common myths about it.

McGarry said he wants to remember these moments, as well as the memories he created with friends and classmates; the joking and laughing that got them through challenging moments of rigorous academics and helped them look forward to coming to school each day.