BALTIMORE (CNS) — More than 200 bishops and archbishops and six cardinals concelebrated the opening Mass for the fall assembly of the U.S. Conference of Catholic Bishops and the first in-person gathering for the prelates since November 2019.

The pandemic moved their past three full meetings to videoconferencing.

Archbishop José H. Gomez of Los Angeles, the USCCB’s president, was the principal celebrant. The bishops, masked and adequately spaced, along with some laypeople, filled the pews of the Basilica of the National Shrine of the Assumption of the Blessed Virgin Mary for the evening Mass Nov. 15.

Among the concelebrants were Baltimore Archbishop William E. Lori and Archbishop Christophe Pierre, apostolic nuncio to the United States, Pope Francis’ representative, who was scheduled to address the bishops at their morning session Nov. 16.

One of the most contentious items on the bishops’ agenda for the meeting was to be discussion and action on a new statement titled “The Mystery of the Eucharist in the Life of the Church.”

Preliminary discussion in June about such a document was extensive and showed some division among the bishops about the themes of the document and even whether the conference should issue one. 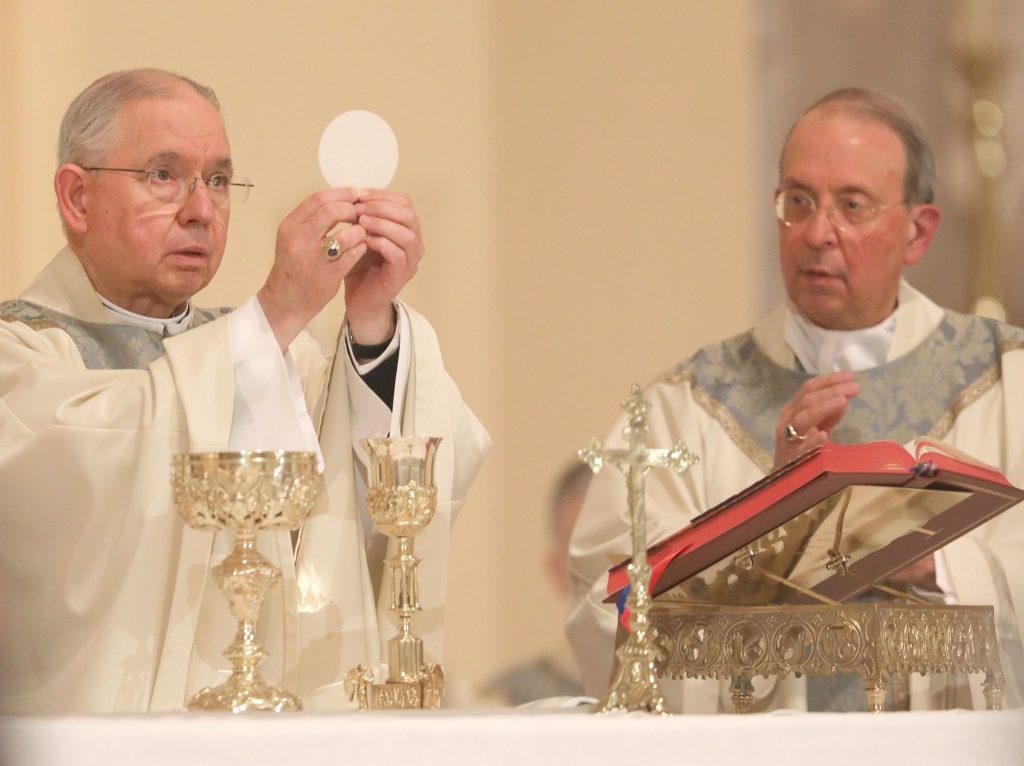 Archbishop JosÈ H. Gomez of Los Angeles, president of the U.S. Conference of Catholic Bishops, concelebrates Mass with Archbishop William E. Lori of Baltimore at the Basilica of the National Shrine of the Assumption of the Blessed Virgin Mary Nov. 15, 2021, in Baltimore during the bishops’ fall general assembly. Due to the COVID-19 pandemic, it is the first in-person bishops’ meeting since 2019. (CNS photo/Bob Roller)

In his homily, Archbishop Lori welcomed the bishops to the basilica, noting that this year, America’s first cathedral marked the 200th anniversary of its dedication by Archbishop Ambrose Maréchal, the third archbishop of Baltimore.

“Not only does this church reflect of the genius of architect Benjamin Henry Latrobe, it also remains after more than two centuries a parish vibrant in faith, worship and service, and for us and for our nation, it stands as the home of American synodality,” he said.

He noted that plaques on the walls of the church commemorate the seven Provincial Councils of Baltimore that were held there 1829-49, as well as the three Plenary Councils held in 1852, 1866 and 1884. Those synods led to the annual meetings of the U.S. bishops and eventually to the creation in 1917 of the episcopal conference that is now the U.S. Conference of Catholic Bishops.

“While those synods were not as inclusive as the synodal path pointed out by Pope Francis, they were nonetheless indicative of a desire on the part of the bishops to meet, to pray, to talk things out, and where possible, to reach consensus, and to do so for the good of a growing Church in a restless and divided nation,” Archbishop Lori said.

“It seems appropriate, then, that we celebrate a tradition of synodality, in these days when the ‘Synod on Synodality’ is underway throughout the Church,” he said.

The Church in the U.S. and around the world is engaged in a listening phase in preparation for the 2023 meeting of the world Synod of Bishops on synodality, called for by Pope Francis, around the theme, “For a Synodal Church: Communion, Participation and Mission.” Diocesan phases of the synod are in progress through August 2022.

“Our predecessor-bishops dealt with problems not unlike the ones we grapple with: the challenge of immigration, liturgical and catechetical matters, the rights of workers, the need for Catholic education, relations between bishops and priests, and more broadly, the relationship of faith and culture in America,” Archbishop Lori said.

He reminded the bishops of today that those prior meetings often included sharp differences of opinion. “Yet, for the divisions that ran through the American hierarchy of that day, they managed to preserve robustly an essential unity of faith, and they proclaimed and taught the faith boldly and persistently.”

He noted that the bishops in 1852 First Plenary Council failed to adequately address the issue of slavery.

“Such silence may have preserved a degree of unity among bishops hailing from the North and the South, but in hindsight, failure to condemn slavery stands as a blot on American conciliarism. Similarly, the bishops gathered for the Second Plenary Council did not fully grasp the immense pastoral need and opportunity presented by 4 million emancipated slaves,” Archbishop Lori said.

In his own 2019 pastoral reflection, “The Journey to Racial Justice — Repentance, Healing and Action,” Archbishop Lori acknowledged the church’s historical involvement in a society in which the institution of slavery was deeply embedded.

He noted in that document that previously published research showed Archbishops John Carroll, Maréchal and Samuel Eccleston “possessed enslaved persons, which included making provisions for their manumission or sale. Father Leonard Neale, who later became archbishop of Baltimore, was a member of the Society of Jesus who made decisions affecting the lives of the enslaved persons held by the Jesuits.”

In the homily, Archbishop Lori said, “Our predecessors maintained a kind of unity by avoiding the divisive issue of slavery, and then missed the opportunity to serve the pastoral and material needs of the emancipated slaves.

“This reminds us that the synodal path is not the path of least resistance, nor is synodal unity based on the avoidance of sensitive or painful problems. Rather, we must seek to know and do the truth in love,” he said.

As the bishops sift through materials for their meeting, they should ask themselves who might be left behind in their deliberations, whether the most vulnerable and defenseless have been overlooked, and what pastoral problems or opportunities may have been tabled.

The archbishop said the conciliar path is paved with prayer, noting that the bishops’ predecessors understood that they needed to depend completely on the eucharistic Lord and the Holy Spirit, and listen attentively to the word of God

“This is how we grow in our capacity to listen to one another as we journey together,” he said.

Archbishop Lori also noted that the synodal way is rooted in the received faith of the Church. “We are rooted in something much bigger and more beautiful than ourselves, and before this faith and its author Jesus Christ, we stand together in amazement. As we do so, the Spirit speaks to our hearts, individually and collectively.”

He said the bishops can model synodality by helping one another and participating in the wisdom and love of the Holy Spirit, with selflessness and humility.

“By manifesting such virtues and attitudes, our proceedings — our gatherings, our deliberations — overcome the din of noisy ideologies of right and left, overwhelming them, not by the volume of our voices, but by our love for the Lord, for His Church, for his people and for one another.”

Gunty is associate publisher/editor of Catholic Review Media, the publishing arm of the Archdiocese of Baltimore.