Listening to some songs is a kind of time travel — a few notes, and you’re instantly back years, not just remembering but reliving a moment from your past.

Recently (and at the risk of showing my age) I found myself whisked to the late 1980s, when fashion, music and hair were all quite loud. I’d happened to hear the first few bars of “On the Turning Away,” a thundering ballad by Pink Floyd. Suddenly I was in my college dorm room, strumming the chords on my guitar when I should have been studying. 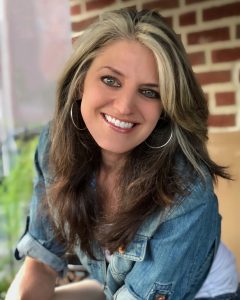 Sexual abuse survivor Gina Christian, pictured in a July 16, 2018, photo reflects on several reasons why people fail to report suspected molestation and harassment. Christian is the senior content producer at CatholicPhilly.com, the news outlet of the Archdiocese of Philadelphia. (CNS photo/courtesy Brendan Reichwein)

Although I was never a diehard Floyd fan (as a Jersey girl, I favored Springsteen), that one song always could — and still does — move me to tears. The lyrics implore the listener not to dismiss the agony of those who suffer, the heartache of “the pale and downtrodden … the weak and the weary.”

Toward the end of the song, vocalist and lead guitarist David Gilmour resolves that there will be “no more turning away from the coldness inside.” The apathy that he rails against ultimately has its source in the icy soul that cannot admit its own lack of love.

As I heard those lyrics again with a heart now 30 years older, I realized just how relevant they remain. The road from that dorm room to where I stand today has been a hard one.

That’s because I’ve spent the better part of those intervening decades coming to terms with the sexual molestation I experienced as a child.

And as the Catholic Church reels from still more clerical abuse scandals — as headlines and hearts break, as cyberspace surges with outrage, as bewildered believers struggle to hold fast to their faith, while others simply drift away — we need to take our core temperature.

Like all evil, sexual abuse thrives in darkness and secrecy. Most of the heinous acts committed against victims, children and adults alike, are unwitnessed — but not entirely secret.

How often we seek any distraction to avoid the horror at hand: that a colleague, a cleric, a mentor, a spouse, a friend, a man or a woman we know and even love could misuse a child or adult sexually.

For over 15 years, I was abused by a family member. My relatives knew something was wrong, as did my teachers. I remember the day Sister Sandra, my grade school principal, pulled me aside after I’d fainted yet again during the nurse’s lesson on “the facts of life.” The mere mention of human sexuality made me violently ill; it was one of many symptoms I manifested, along with depression and self-mutilation.

In that long-ago hallway, Sister had looked at me thoughtfully for a moment. Then she told me to get a drink of water and sent me to the library to read a book until the class was finished.

And that was all.

Yet I now know that in many ways she felt she had no other choice. Since the 19th century, the issue of sexual abuse has received only intermittent attention in the United States, said historian Steven Mintz of the University of Texas. Despite various reform efforts, our awareness of the perennial problem “waxes and wanes,” Mintz observed — and today, far too many of us still fail to intervene.

According to 1in6, a nonprofit that assists male survivors of sexual abuse, there are a number of reasons that keep adults from protecting children who are being molested.

Sometimes intervention is seen as too risky; those who suspect abusers may lose relationships, jobs or financial security if they speak out. Sometimes bystanders are plagued by self-doubt; they wonder if they’re misreading the signs of abuse, or if they’re simply being paranoid.

Many times, and despite thousands of examples to the contrary, adults fail to act because they have misconceptions about abusers — that they’re easily recognized as evil and antisocial, when instead so many seem to be good individuals with families, jobs and “normal” lives.

And sometimes the issue of abuse triggers overwhelming feelings of fear, anger and shame in those who are on the outside looking in, paralyzing them and preventing them from taking action.

Children, along with many adults, rarely use direct language to tell about the abuse they’re experiencing. Ellen Bass and Laura Davis — who sparked renewed attention to the problem of sexual abuse with their 1988 book “The Courage to Heal” — stress that we need to listen and watch for more subtle cues, such as vague references, acting out, mood swings and regression.

The worst evil thrives not in a fiery but a in frozen heart, one that can neither feel another’s pain nor act to assuage it. If our Church was born in the flames of Pentecost, then may that same Spirit rage within us now — because we can no longer endure hearts of frost, and we can no longer afford to turn away.