By Sarah Dustman and Christopher Lushis

Attendance at Sunday Mass each week is of utmost importance for every Catholic Christian, serving as both a required precept of the Church as well as an authentic sign of our holy communion with God and one another in the body of Christ.

While the usual time to gather on Sunday for the Eucharist has historically been celebrated early in the day, many parishes in the Diocese of Fort Wayne-South Bend have also consistently provided the faithful with opportunities to attend Mass on Sunday nights and evenings.

Although most dioceses do have parishes that offer Sunday evening liturgies, the Diocese of Fort Wayne-South Bend stands out for the vast number of Masses offered at a later time. Fourteen parishes celebrate Sunday liturgies with start times ranging between 4:30 p.m. and 8 p.m. 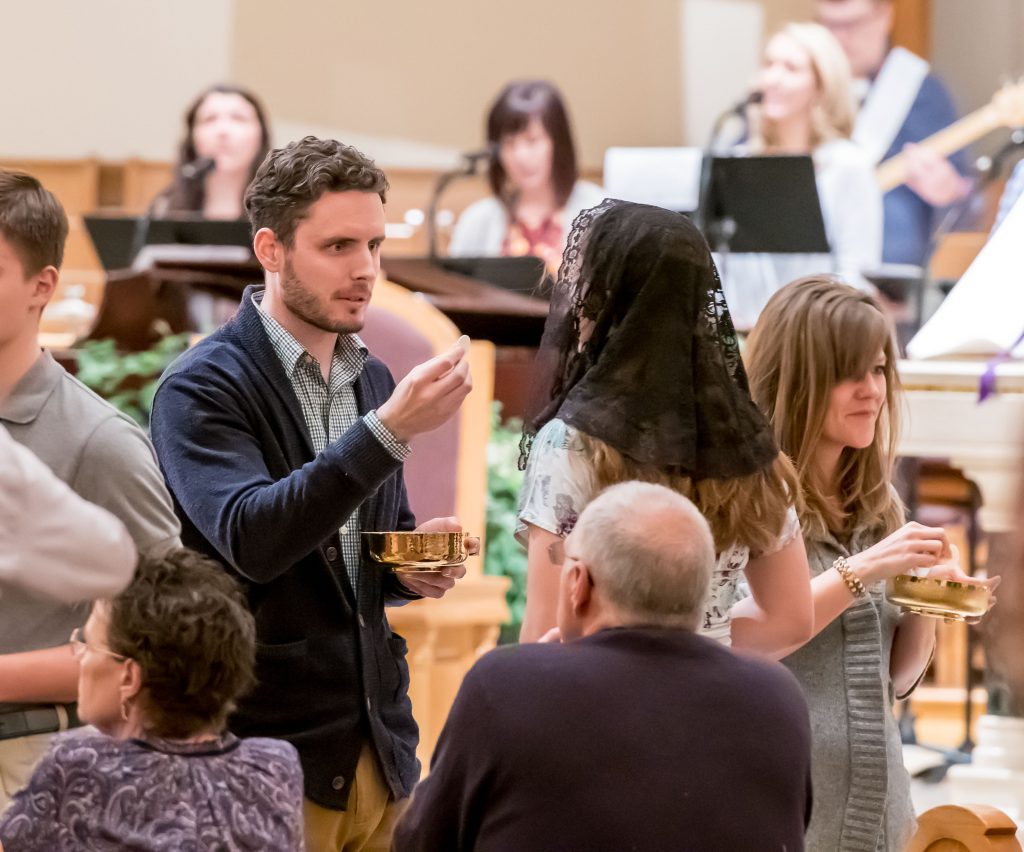 One reason these Mass times have become and remained popular is due to the Sunday liturgy schedule at many colleges within the diocese, with strong numbers of recent graduates remaining in the nearby areas who have become accustomed to later Masses. At the University of Notre Dame, 26 of the 30 residence halls offer Sunday Masses at 8:30 p.m. or later, with the majority beginning at 10 p.m. Saint Mary’s College offers Sunday liturgies at 7 p.m. and 9 p.m., while Holy Cross College’s Mass is held at 7:30 p.m.

Of the South Bend parishes, St. Thérèse, Little Flower is known for offering the latest Mass option open to the local community, beginning at 8 p.m. “Our 8 p.m. Sunday Mass began over nine years ago as a response to additional graduate-school housing built surrounding the parish campus, said Brian Garland, director of liturgy and music at Little Flower. “This option has been well-received by the parishioners, with about 25 percent of the parish community attending this Mass, including a large number of younger adults.” He added that it is also the latest Sunday evening Mass on the north side of town, “which attracts a significant number of nonparishioners, particularly during the summer.”

Kate O’Neill, a recent college graduate who assists with the Little Flower Youth Group, indicated that she enjoys attending the later Mass for multiple reasons. “While it is a convenient time, the community aspect also has a lot to do with why I prefer that Mass. While I don’t mind going to Mass by myself, a good number of people I know also come at 8 p.m., so it is enjoyable to be praying with friends.” O’Neill further indicated that she likes “ending the day with Mass because it is very peaceful to go to sleep shortly after partaking in a liturgy.” 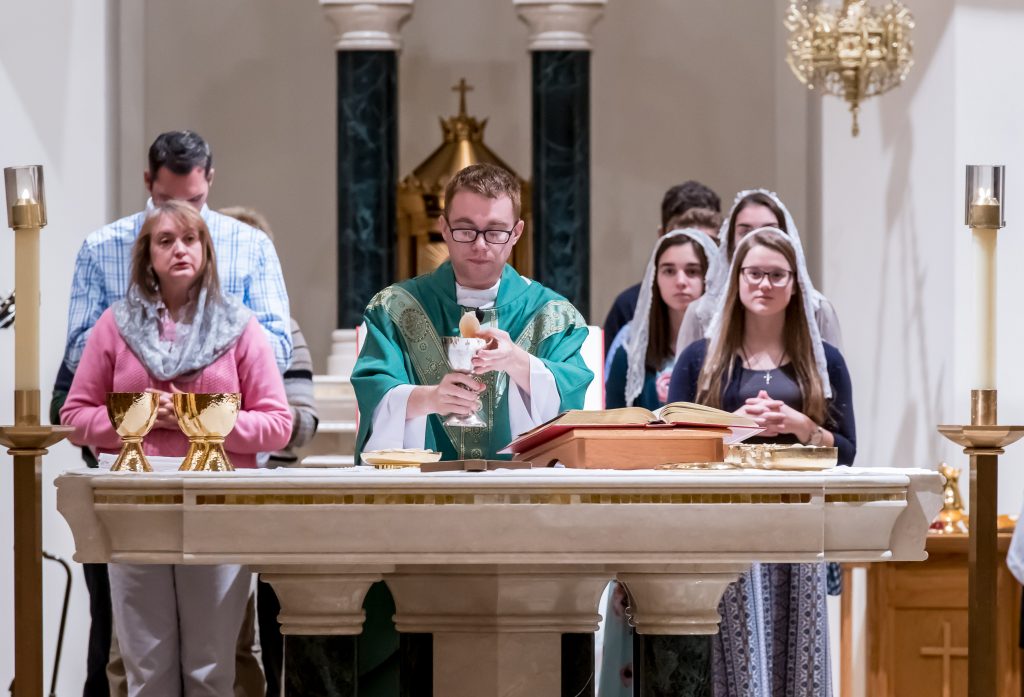 Dorothy Schuerman, a pastoral associate at St. Vincent, shared that “the 6 p.m. Mass started with our Antioch youth program, which was the precursor to the Life Teen program currently in existence. Originally, it was oriented toward the teens so they could attend and then participate in fellowship and catechesis after that Mass. However, over the past several years, it has grown to a family-style Mass, still focused on the teens assisting as servers, lectors, extraordinary ministers, ushers, etc. But people of all ages attend and participate. The congregation is definitely a mix of demographics at this point, and the Mass has been integrated into the fabric of the parish.”

Other factors that have led people to choose attending a later Mass include employment responsibilities. Father Cyril Fernandes, pastor of St. Patrick Parish, South Bend, indicated that their Sunday 5:30 p.m. Mass has been in place since the 1970s.

“It was originally implemented to facilitate Catholics in the city to attend Mass, when work schedules or other functions did not allow for them to attend a morning Mass. In the beginning, most of the parishioners still attended the morning Masses. After the merging of St. Patrick and St. Hedwig, though, the 5:30 p.m. Mass started to have more parishioners in attendance. The Sunday evening Mass still gives Catholics of all age groups and ethnic backgrounds an opportunity to attend whose work schedules or activities do not allow for a Sunday morning Mass.”

Father Kevin Bauman, pastor of Our Lady of Hungary, South Bend, has observed a similar dynamic.

“Our 7 p.m. Spanish Mass provides worship for those in the service industry: restaurants, hotels, retail, etc. that due to their schedules are unable to attend Mass during the day.” He added: “In Mexico, it is common to have evening Masses, and it seems that the trend locally is to likewise advance the hour of Mass, if there is a question of moving it.”

The numerous options for Mass also aid those who are running late and wish to wholeheartedly participate in the Sunday liturgy from start to finish. This increased access to the Eucharistic celebration, allows us, in the words of Pope Francis, to more fully “receive what we truly need from God.”

In a general audience given this time last year, Pope Francis explained, “The Sunday encounter with the Lord gives us the strength to experience the present with confidence and courage, and to go forth with hope. Eucharistic communion with Jesus, risen and ever-living, anticipates the Sunday without sunset, when there will be no more weariness nor pain, nor sorrow nor tears, but only the joy of living fully and forever with the Lord. Sunday Mass also speaks to us of this blessed repose, teaching us to entrust ourselves during the course of the week to the hands of the Father who is in heaven. We Christians need to take part in Sunday Mass because only with the grace of Jesus, with His presence alive in us and among us, can we put into practice His commandment and, in this way, be His credible witnesses.”

To find available Masses in the local area or when traveling, visit www.masstimes.org. However, to avoid confusion or errors, it is usually best to confirm through the specific parish website that the liturgy will be offered on the day and time indicated.