Two diocesan high school football programs excelled this year despite a global pandemic and players’ personal losses. Bishop Luers, Fort Wayne, advanced to state competition, and Marian High School, Mishawaka, to semi-state. But their records and final scores show only a piece of the hard work and dedication offered daily. As a result of their efforts, community developed, comradeship built and the continuous care that was demonstrated led to a fall football season no one who was involved with the teams will forget.

“The players this year understood these lessons in a very real way, as they were asked to implement policies and procedures that made the sport even more challenging,” said Marian principal Mark Kirzeder. “As an educator, I was grateful that our players were given this opportunity, because what they learned will stay with them the rest of their lives. Playing football this year also allowed our students to participate more fully in Marian’s mission to ‘strive to live the example of Jesus Christ as teacher and servant.’” 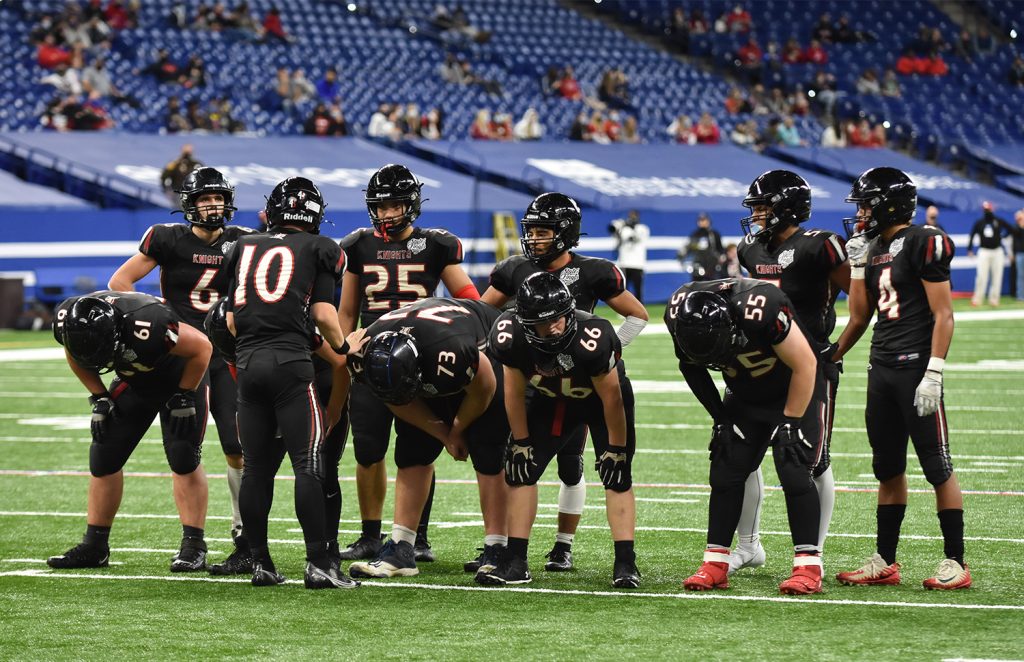 Provided by John Felts
Bishop Luers High School, Fort Wayne, struggled through a competitive and unpredictable season to reach the state Class 2A football championship Nov. 27. The opportunity to play despite the COVID-19 pandemic brought the school community much joy, united them and taught them perseverance, their coaches and parents said.

“The ability for our athletes to be able to compete and have some sense of normalcy in their lives was and is a blessing. It has been very challenging on the emotional level and spiritual level for our students and athletes this school year; this was a great opportunity for our players to see the power of God’s love in the midst of this dark time. On the personal side, it was fun to see kids being kids again.”

The Bishop Luers team grew and improved every week, he said, and recovered from lopsided losses to talented and bigger 4A, 5A and 6A schools. Through those games the players continued to care for each other and support each other, he observed.

“The team showed great guts, grit and class as we advanced toward state finals and continued to show those qualities even in a bitter defeat,” he said. “I believe our work with the Virtue = Strength program — formerly called SportsLeader — helped our athletes not only show grace in victory but in defeat also.” 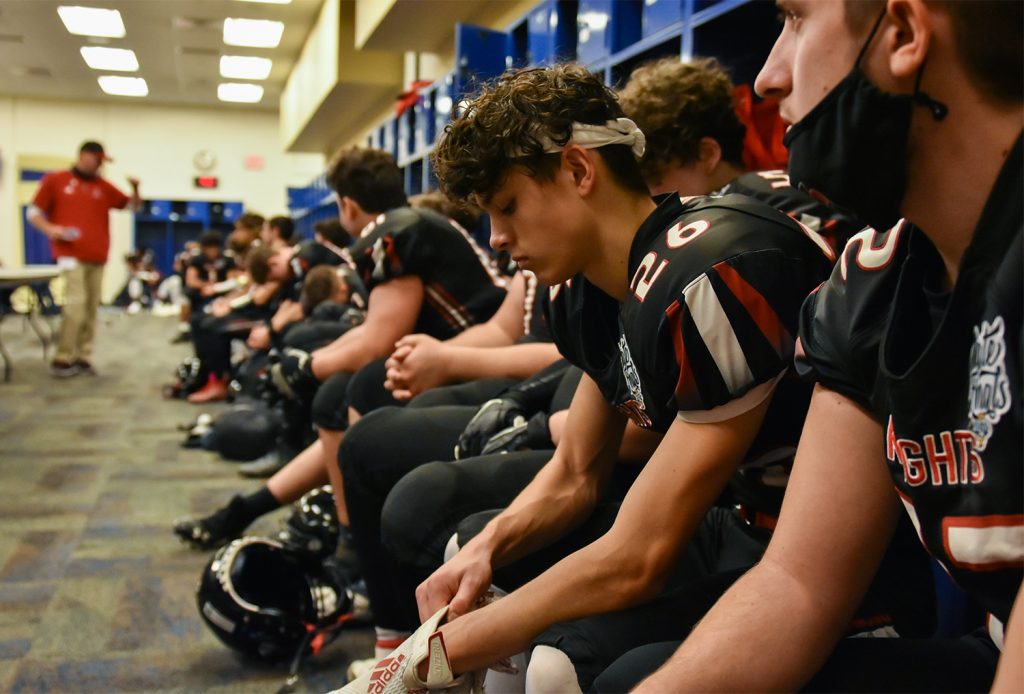 Photos provided by John Felts
A one-point loss in the Class 2A IHSAA championship in Indianapolis felt devastating to the Fort Wayne team.

The school’s championship game ended in a one-point loss to Western Boone, 36-35, on a last-second field goal, which challenged the players’ emotions. But the team’s character shined through and was even recognized by the opposing team on social media.

The forging of a strong Catholic community during the process was what hallmarked the season for Bishop Luers head coach Kyle Lindsay. The team handled adversity well, he said, because they played as a family and “were there for each other when times were rough – kids losing relatives, best friends and season-ending injuries.” That translated to the field in that the players were supportive of each other after mistakes were made.

“Football is a game of emotion, and I am proud of how our kids played and showed character and class through it all.”

“Hopefully, our kids took away how much our faith helps in everyday life,” Lindsay reflected. “This belief in something greater than us translated to the field, as the kids had to have faith that what we were doing and how we prepared for the games would lead to something special.” COVID-19 and the many procedures it forced them to follow also contributed to the sense of community and instilled discipline in the student-athletes.

“All in all, the kids learned what it means to be a part of the Bishop Luers football program … That faith, unity and family are the central components to football success here,” he shared. “Kids learned to put others before themselves, to hold themselves accountable, and to work hard even when our bodies are exhausted or our minds tell us to take plays off.” 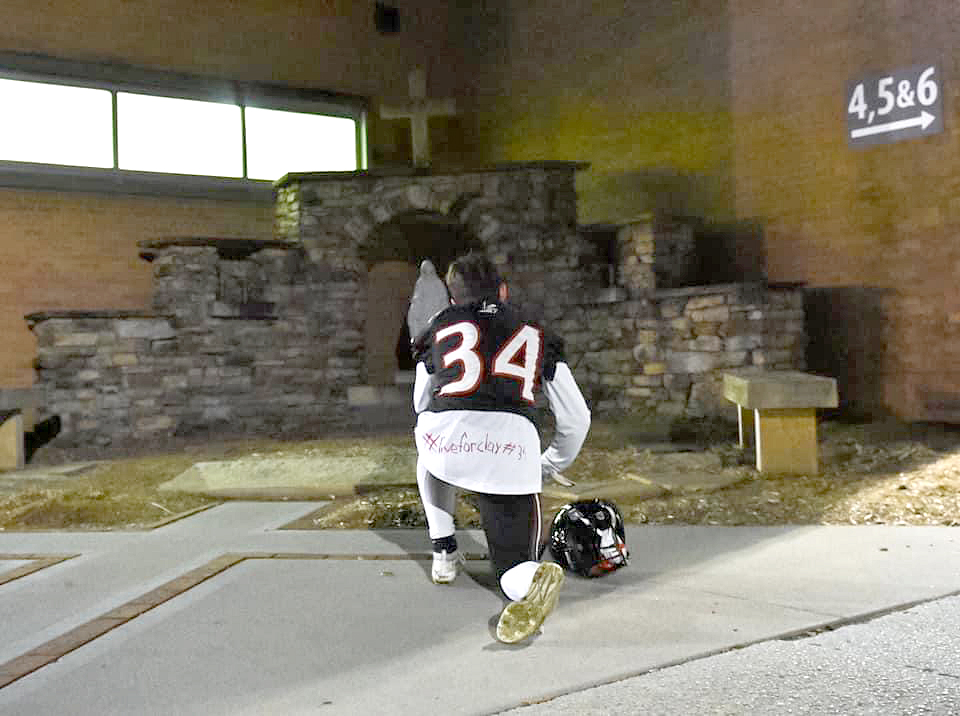 The Bishop Luers No. 34 jersey was worn for most of this season by Brayden McInturf, a close friend of the jersey’s original owner, Clayten Stuart. Stuart, a Bishop Luers freshman, died unexpectedly at the beginning of the season.

For sophomore Brayden McInturf, this football family support was most meaningful when his best friend, 15-year-old Clayten Stuart, suddenly passed away. Friends since preschool, they had grown especially close in the past year, living near each other and playing football outside throughout the pandemic. “He called my family his and I called his family mine.”

Clayten, a freshman, had started as No. 34 on one of the crosstown Bishop Dwenger football teams. He was “genuine, a role model,” McInturf said of his friend. “I always could talk with him, always could count on him. Clayten was relentless in his work ethic, especially in football.”

To honor his friend, McInturf asked coach Lindsay if he could switch his No. 22 jersey to No. 34; but another player already had the number.

Lindsay and the other player were agreeable to the switch. With the IHSAA’s approval, McInturf wore No. 34 for the remainder of the season.

“The kids had been supporting each other all season so it’s not a surprise they did everything they could to support Brayden in this time of need,” said Lindsay. 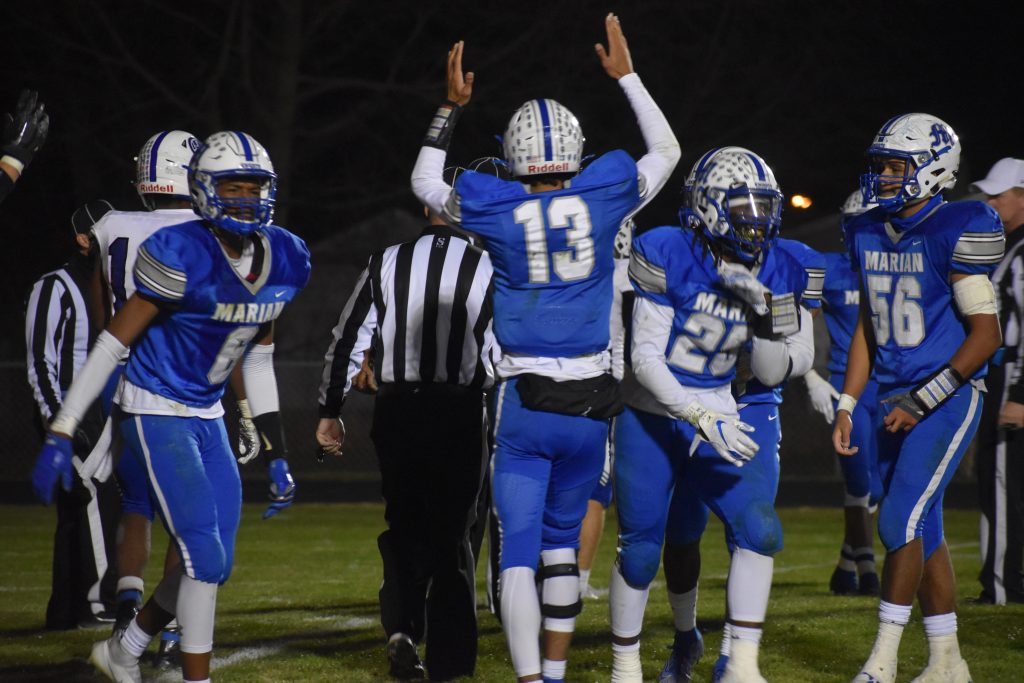 Marian head coach Mike Davidson also took away spiritual lessons from the fall football season — especially gratitude for each other and for all of God’s blessings.

“My favorite part of the season was the joy these kids experienced for one another on the football field. They were part of a brotherhood they’ll cherish forever, and that they were able to bring a sense of pride and joy to the community through this pandemic that many didn’t think could happen.”

“The cancellation of the Elkhart game (due to quarantines) was certainly the low point of our season,” he admitted. His No. 1 concern was the mental health of the players, both those who had been quarantined and might feel they responsible for the cancellation and those players who weren’t but had that game taken away from them through no fault of their own.

While COVID-19 drove people apart physically this past year, in the fall Marian football players, their families and the school community became closer, supporting one another in creative ways. The season became an antidote for the year. 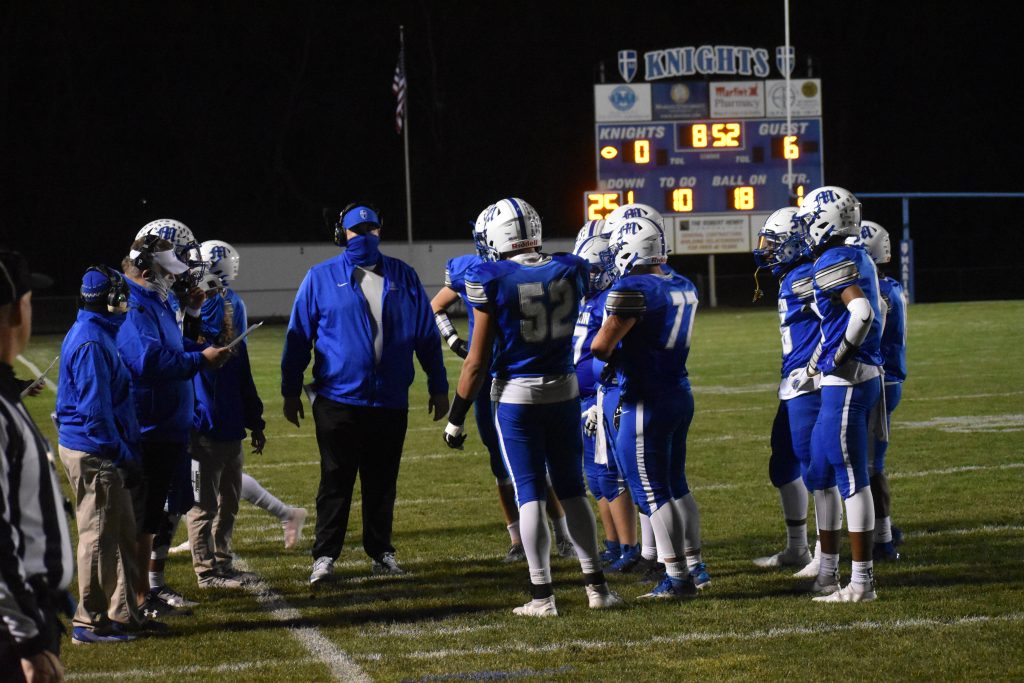 Carol Daher said game time was the best part of her week. Her son, senior Lawrence Daher, said, “I would absolutely choose to play my senior year again because of all the memories I made. Getting to start on one of the top teams in the state meant everything to me, and it made all the work I put in worth it.” The ability to get through a complete season was an accomplishment as well.”

“The highlight of the season for me was the Week 1 win over Mishawaka. Coming into the season, I was honestly unsure of how successful we would be. The whole game was back and forth, and we eventually scored with 6 seconds left on the clock. Our QB Maddix Bogunia made an incredible play for us to win the game. The excitement following the game was amazing, because we realized how good we could be (even) with two of our best players not playing.”

“Our biggest opponent was really COVID,” Courtney Bogunia, mother of the senior quarterback and a member of the Parents’ Touchdown Club Committee, shared. “We had to be creative from the very beginning: This was not what we were expecting for his senior year. Maddix wants to play football in college, but there were no camps this summer … so the practices were virtual, the boys had to be self-motivated and they found out if they really loved the sport of football or not.”

The first game of the season set the tone. “We just prayed. We didn’t know if we would even have next week.”

“This team was resilient,” Marian principal Mark Kirzeder said. “Not only did they have to overcome the challenges posed by COVID-19, but they also won some very tough football games, coming from behind to beat Penn and Mishawaka.”

Davidson said that in July he would’ve laughed if anyone had told him the team would make it safely through the whole season. He is grateful for the commitment that the coaching staff, players and families demonstrated and for everyone’s sacrifice. The field managers, for example, “did a tremendous job of wiping down equipment, pads and practice dummies after every practice and maintance sprayed down the locker room and common spaces every morning,” he acknowledged, and Davidson himself brought home practice clothes and washed three to four loads of laundry each night. Monitoring players’ physical and mental health was important, too.

“The comeback is always greater than the setback,” Bogunia told her son during the season. “You give back from what God what gave you. Don’t take anything for granted.

The team played with a lot of heart this year, she observed. “They felt like a family unit more than other years. Everyone did the job that was asked of them, which is why they were so successful. You don’t need a ring to show you are a champion.”