March 19 is the Solemnity of St. Joseph, Spouse of the Blessed Virgin Mary. In honor of their school’s patron, kindergarten through fifth-grade students at St. Joseph School in Garrett took to the hallway, gymnasium and outdoors in celebration. 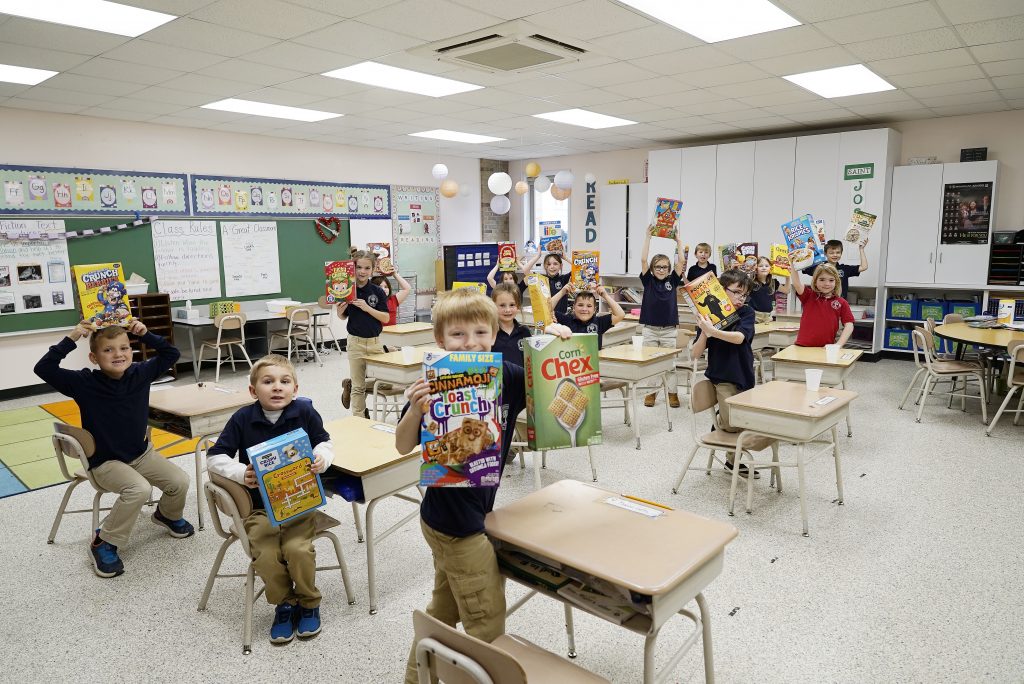 Photos by Samantha Rohloff
First-grade students at St. Joseph School in Garrett hold up the cereal boxes they collected to donate to St. Martin’s Soup Kitchen on March 19, in honor of the celebration of the Solemnity of St. Joseph, their school’s patron.

The school pays tribute to St. Joseph in a variety of ways throughout the year – even their bus number is 319 after the saint’s Solemnity date. “Whenever it’s St. Joseph’s Day,” said Jenny Enrietto, the school’s principal, “we always do a big, school-wide celebration.” Enrietto went on to explain that this year’s St. Joseph celebration, the first outside of the wake of COVID-19, was particularly important “because during the pandemic, we really felt like St. Joseph had his hand on us.”

As the solemnity fell on a Saturday this year, the school celebrated on Friday, March 18. The day began with Mass and festivities commenced in the early afternoon. Students were previously instructed to collect cereal boxes to donate to St. Martin’s Soup Kitchen, located just outside their school. But for a brief moment that Friday, the cereal boxes became something else entirely. 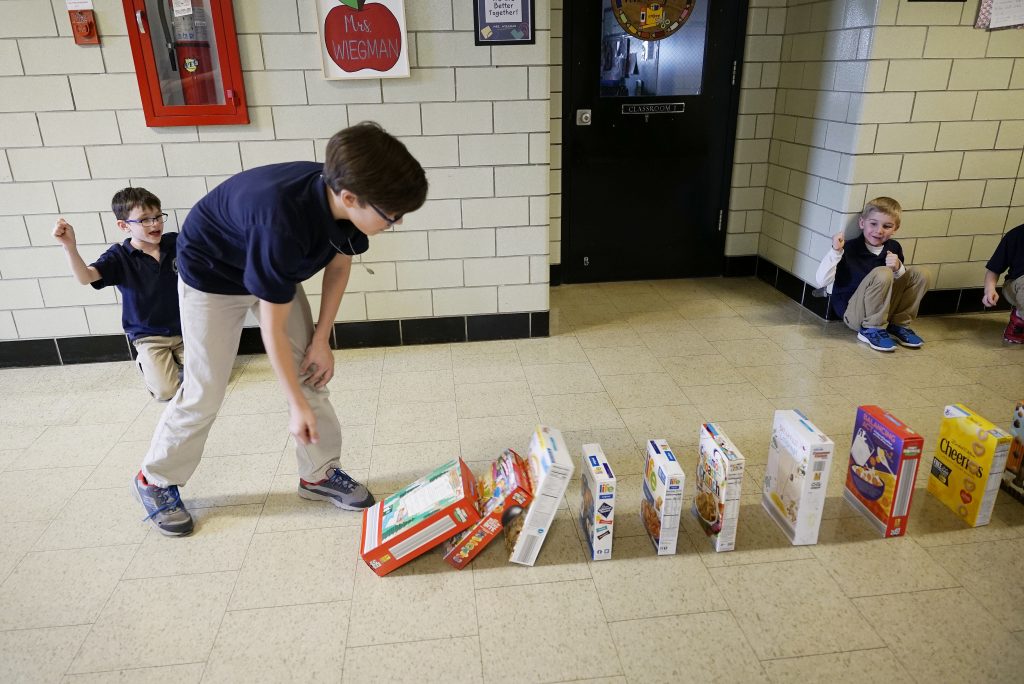 Students and teachers had fun playing dominoes with the cereal boxes before taking them to be blessed and delivering them to the soup kitchen.

Students and teachers placed each box a few inches apart from the next one, forming a line down the center of a hallway. Everyone eagerly sat outside their classrooms and waited. When everything was in place, the path of cereal boxes stretched around 70 feet long, starting at the first-grade classroom and reaching the other end of the hall.

The path of boxes stood as one long row of dominoes. In keeping with the day’s theme, any student with the first or middle name of Joseph was called to tap the first box, sending it tumbling into the next one, and so on. But ironically, of all the students present, not one was named after the saint.

Instead, the oldest student in the school began the chain reaction; everyone watched in awe as the cereal boxes raced past them. Shouts and applause sounded as the last one fell, and following the teachers’ instructions, students set the boxes in place to be knocked over again.

The two youngest students in the school were then called to push the first box over together. After that, the display was reset again. Continuing with this pattern, the teacher present at the school the longest was called next. Then, students cheered as other teachers took their turn in setting off the dominoes.

When all the boxes had fallen for the last time, students collected them and made their way outside.

Taking advantage of the nice weather, they walked to the rectory right next door. Father James Shafer, pastor of St. Joseph Parish in Garrett, stood atop the stairs and prayed a blessing over the children and their donations. The kids proudly raised their boxes high above their heads for the blessing. 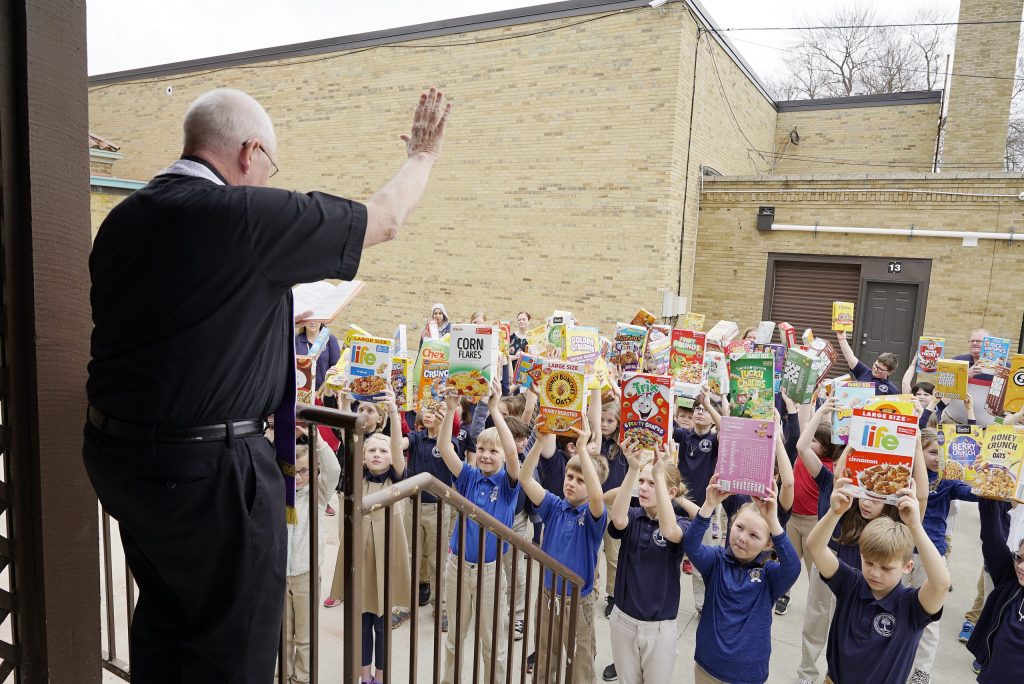 “You are the best kids in the world,” he told them with a huge smile on his face. Father Shafer explained to the children how helpful they were in offering food to those who need it.

The short procession ended at St. Martin’s Soup Kitchen, just feet away from both the school and rectory. They gave the cereal boxes to soup kitchen workers, then made their way back to the school. The donated cereal boxes filled about 10 cardboard boxes. Enrietto estimated that more than a hundred cereal boxes were donated that day.

In the gym, students enjoyed cupcakes – their favorite part of the day, some said – followed by an ultimate rock-paper-scissors tournament. Every student in the school had participated in preliminary rounds, so a bracket of the finalists was created. Students played against teachers, students against students and teachers against teachers. In the end, only two stood victorious. Kindergarten teacher Maria Albertson was the staff winner, and fifth-grader Kaylee Gaar was the student winner. They were each presented with trophies.

Awards were also given to students during the Tag Ceremony, a yearly celebration marking achievements throughout the school year. Kids were given colorful little tags they could wear with pictures and phrases on them. Students who received tags were congratulated for good grades, as well as for participating in the spelling bee, science fair and student council. The girls’ volleyball team was also recognized. Students who sold Burger King coupons had their names placed in a raffle. Two Walmart gift cards and $25 in cash were awarded to three students whose names were drawn.

As the event wound down, students walked to St. Joseph Church just across the street. Once inside, two of them led the rest of the school in praying a decade of the rosary, an activity they do every Friday to end their week, said the principal. That day’s decade held the intentions of peace for families and peace for the world. “Because when you see your world events,” explained Enrietto, “the part you can do is different for everyone, but we can all pray.”