After greeting everyone over the intercom, Bishop Rhoades began his morning by joining students in the Leep Dining Hall. There, students in the Project Lead the Way classes, a nationwide organization that helps schools such as Saint Joseph to implement a more hands-on STEM curriculum, and those from the Faith and Science classes led short presentations on what they had studied.

After hearing their presentations, Bishop Rhoades expressed his own love of religion and science with the students. Biology was his favorite science class, he told them. And among his many interests, physics, astronomy and biology’s connections to the faith is especially captivating to him, he said.

Photos by Derby Photography
A student in the Lead the Way Program, a national STEM initiative that Saint Joseph High School participates in, gives a presentation on what he has learned in his Biomedical Sciences class.

In his homily during the all-school Mass, Bishop Rhoades spoke on the greatness of the sacraments of initiation. He explained how baptism, like Christ’s resurrection, brings “new life.” And in confirmation, he added, “a special outpouring of the Holy Spirit” is bestowed upon those who receive it, “like the Apostles received on Pentecost.”

While acknowledging the greatness of two out of the three sacraments of initiation, Bishop Rhoades also spoke on the significance of the third. “The Eucharist is truly ‘the sacrament of sacraments,’ the greatest of the sacraments, because it is Jesus Himself. Jesus becomes our living bread. He is the Bread of Life. The new life we received in Baptism, the life of grace, is increased and renewed every time we receive holy Communion.”

His words were especially fitting as five students and one staff member received the sacraments of initiation during the Mass. Senior Cole Hatkevich was baptized. He was also confirmed and received his first holy Communion alongside junior Juan Gonzales Hernandez and Cafeteria Manager Danielle Kaidan. Sophomore Margaret Baxter and two freshmen, Itzayana Garcia and John Haigh, were also confirmed. This, said John Kennedy, the school’s principal, was what made this year’s bishop visit distinct from all the rest. 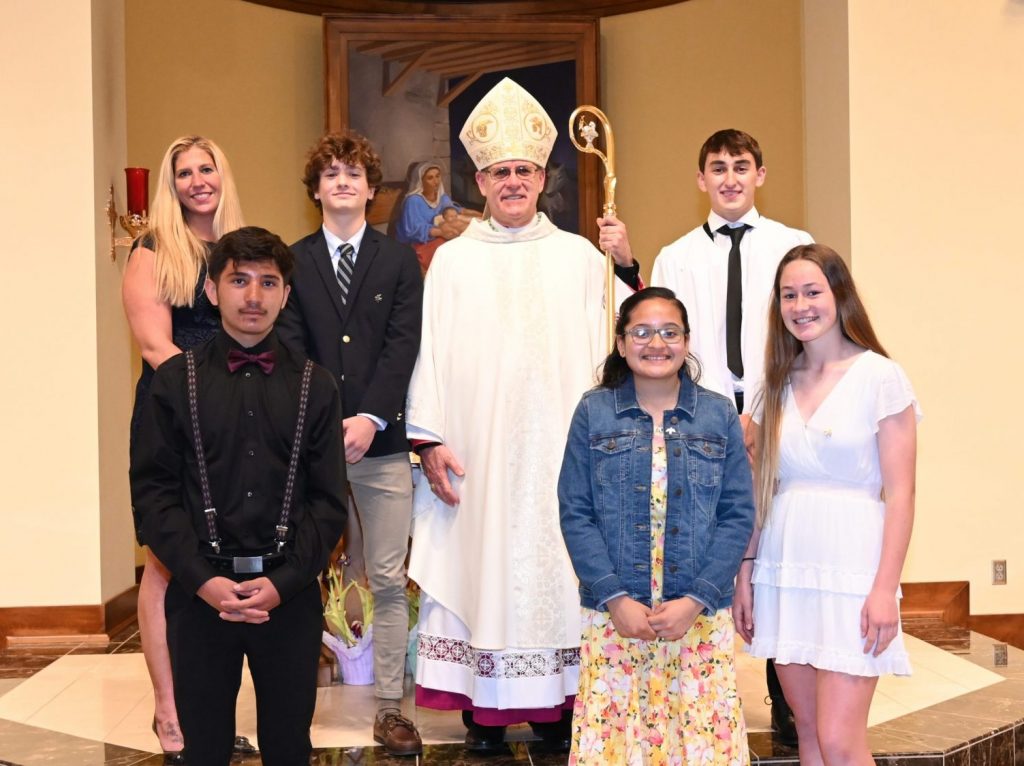 Kaidan expressed her excitement in receiving her first holy Communion, as she was then able to participate with others in receiving it every Sunday. Hatkevich spoke about Saint Joseph High School’s impact on his entrance into the Church.

“When I first came here, I didn’t really know anything about the Church, but through the theology classes and all the teachers, I slowly began to learn how everything works. And then eventually my senior year, it just was getting involved in the Masses and liturgies and prayers that we had,” he said. 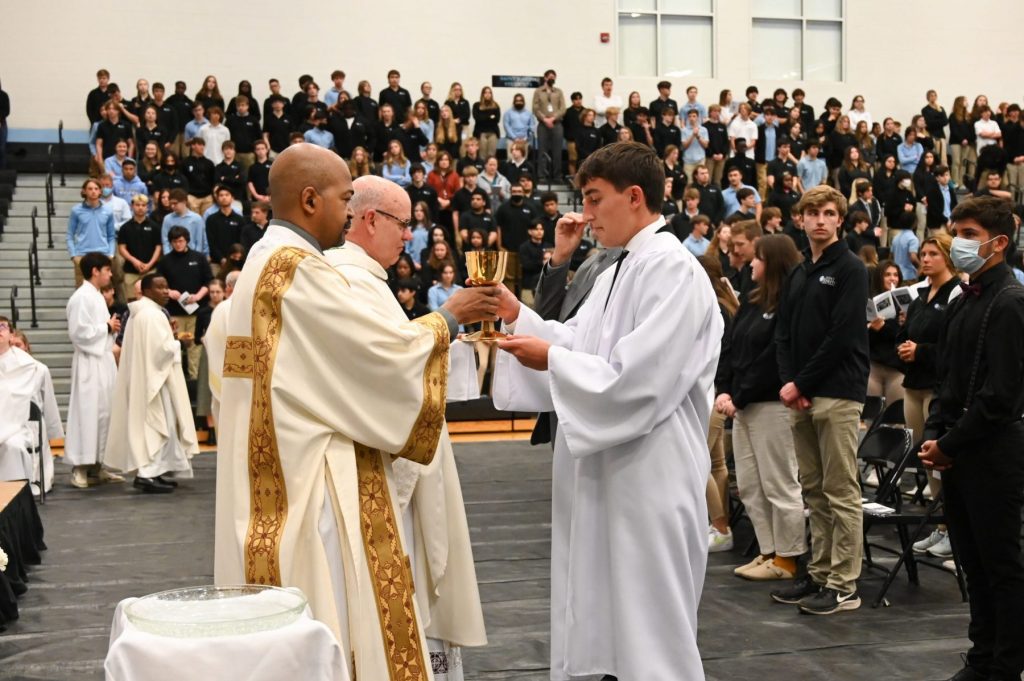 Hatkevich said that in the future, he will look back on his baptism as “one of the most important things that I’ve ever done – I’ll just always remember it.”

The school celebrated more of its students and staff after Mass. Community Award Winners were announced. These awards are bestowed every month to one male and one female senior student, as well as to one faculty or staff member, explained Kennedy. Winners “build community and foster a positive, joyful, welcoming, supportive and inclusive school climate,” he said. April’s student winners were Katie Lavelle and Joshua Culver. Faculty awardee was Test Coordinator/Data Specialist Ginny Weaver.

It is also a monthly tradition in the school for one group, club, team, etc. to issue a service challenge to another group, club or team. This initiative is called “Aidan’s Masterpiece,” and it is a service-based club named after Saint Joseph student Aidan Short, who passed away in 2018 in his junior year, explained Kennedy. The club was created in memory of “Aidan’s desire to serve when he was with us,” he continued.

So, “to continue Aidan’s mission of serving,” as the school’s website put it, the boys’ tennis team, challenged with service in April, called on the boys’ football team to carry this torch throughout the month of May.
Forty-seven Saint Joe Scholars were also announced. These were seniors who, for their first seven semesters, maintained a 4.00 GPA or above. Brendan Gonzales and Samuel Thomas were named as the 2022 Valedictorian and Salutatorian, respectively.

The school then gifted Bishop Rhoades with a St. Michael the Archangel original print. Its artist, Tess Cassady, a 2008 graduate of Saint Joseph, also signed it. “Through her artwork,” said Kennedy, she “is raising funds for the Ukrainian relief effort.”

Afterward, the bishop joined a group of student representatives for lunch. He was curious as to which parishes the students belonged to, and they all discussed school events, such as the girls’ soccer team reaching semi-state and the school’s production of “Hello, Dolly!” from which many of its cast members were present during the lunch. 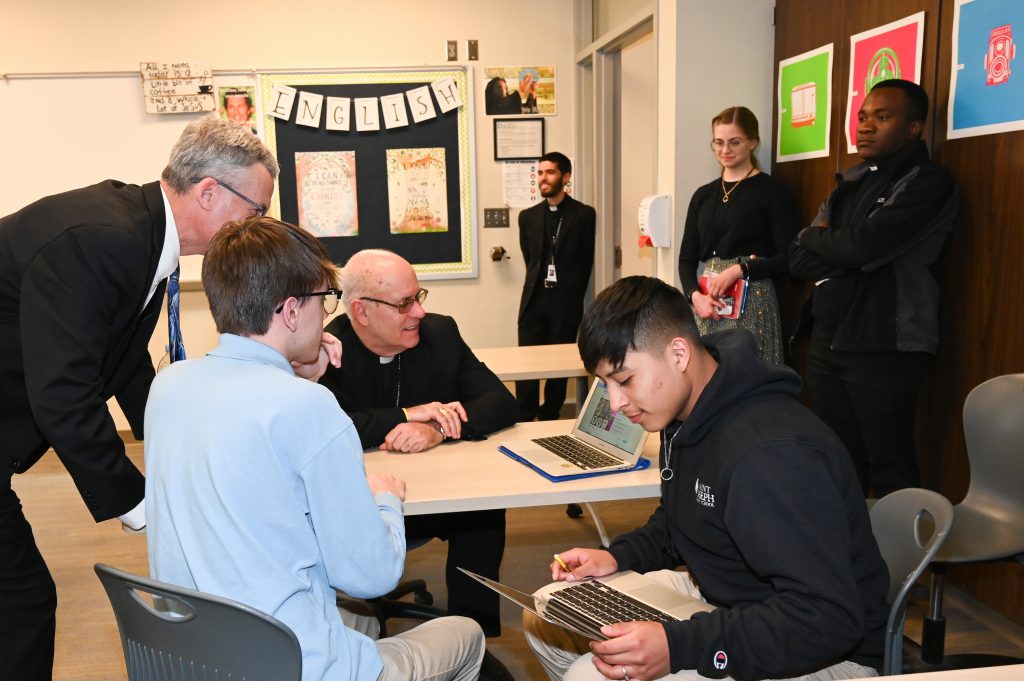 Working with students in Creative Writing class, Bishop Rhoades helps come up with ideas for a story based on automated prompts on a website.

Bishop Rhoades also paid a visit to Andrea Smolinski’s creative writing class, where he enjoyed brainstorming ideas with students to come up with a story. They were instructed to visit a website that prompted them with nine random shapes from which they had to use for the story’s creation.

Smolinski, a Saint Joseph alum who has taught in the Diocese of Fort Wayne-South Bend for 13 years, was the 2021-22 Christ the Teacher Award winner. Her students commended her “compassion that never leaves,” as well as the way she “makes kids want to come to class and learn.”

Kennedy praised his students for acting Christ-like “in the way they treat each other, in the way they spread joy to others and in the way they serve.” He also applauded his faculty and staff for imitating St. Joseph, the school’s namesake, through their hard work and in how they aim to inspire students to live “a faith-filled and a moral life.” 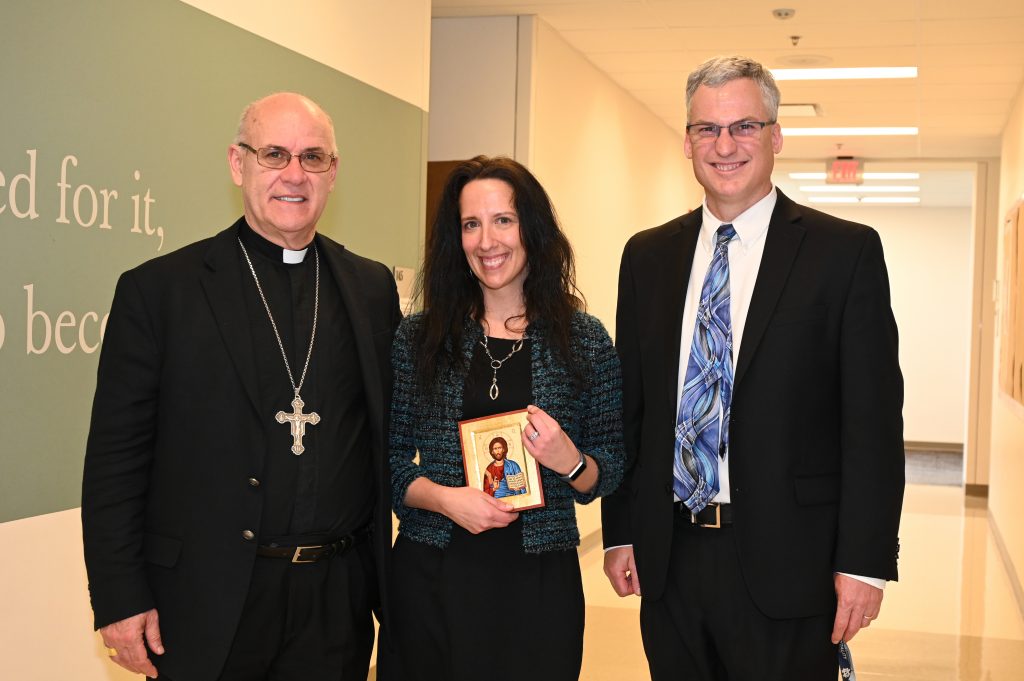