Click here for more photos from the day by Derby Photography.

“Look to St. Joseph!” This was the heart of Bishop Kevin C. Rhoades’ message during a pastoral visit to Saint Joseph High School, South Bend, on March 19.

Highlighting the virtues of the school’s patron saint, especially his faithfulness, humility and chastity, Bishop Rhoades offered the young men and women in attendance his own advice for beginning and cultivating romantic relationships.

Acknowledging that such a homily isn’t a usual occurrence, he began with an inquiry that he imagined the students had at that moment: “Bishop, you’re giving us dating advice?” He continued emphatically: “Yes, and I hope you think about it seriously.”

Based on conversations with his own nieces and nephew, he stressed: “Young women, look for a man who is righteous like St. Joseph, who desires to keep God’s commandments, who is honorable, who seeks to do God’s will and is charitable toward others. Young men, this is real manhood.” 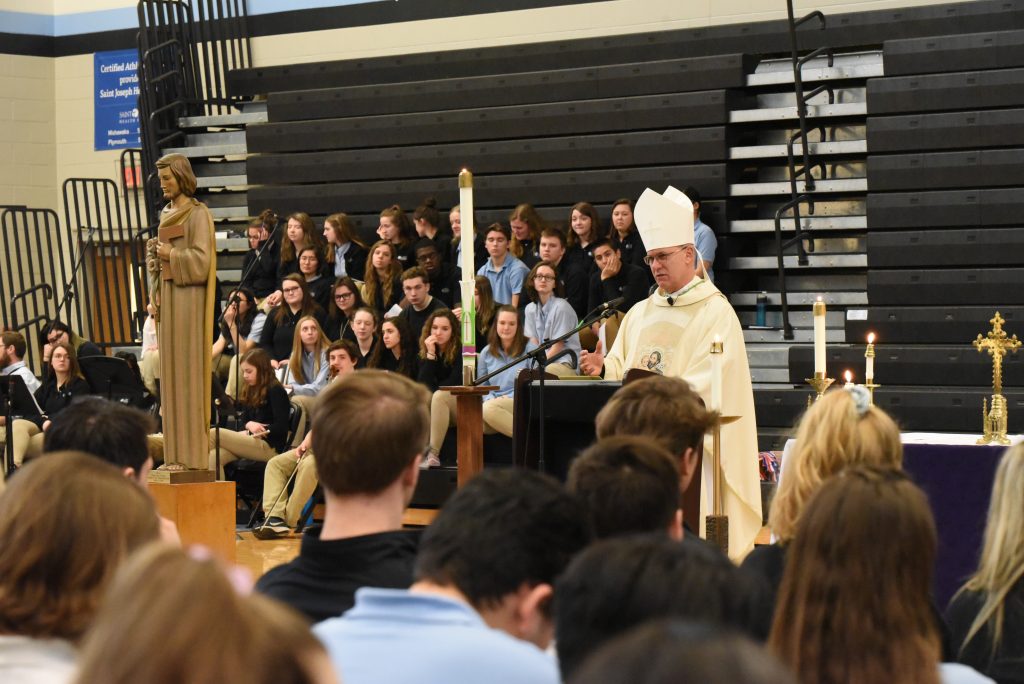 Bishop Rhoades addresses the student body during his homily, challenging the young men present to model themselves after St. Joseph and the young women to look for such men. — Photos by Derby Photography

The bishop continued by emphasizing the importance of humility. “Young women, did you ever meet a guy who talks about himself nonstop, who brags all the time about his accomplishments and what he can do, and hardly listens to you or show much interest in your life? My advice – stay away! Think about St. Joseph. There is a lot he could have bragged about, but there was no such pride in him. His life was all about his wife and son, about Jesus and Mary. Look for a guy who will care more about you than himself and who would be a loving, tender and protective father of your children. It takes strength and courage to put others first.”

Thirdly, he spoke of the virtue of chastity. “Joseph protected the virginity of Mary. He had total respect for Mary and would never use her as an object of his sexual desires. I encourage you to only go out with guys who respect you and your bodies, who will make a commitment with you to wait until marriage to enter into that sacred communion of your bodies in sexual union. And guys, in the struggle to live in chastity, ask St. Joseph to intercede for you to obtain God’s grace and strength to be chaste. This really takes courage today since our culture not only doesn’t value chastity, it often ridicules it.” 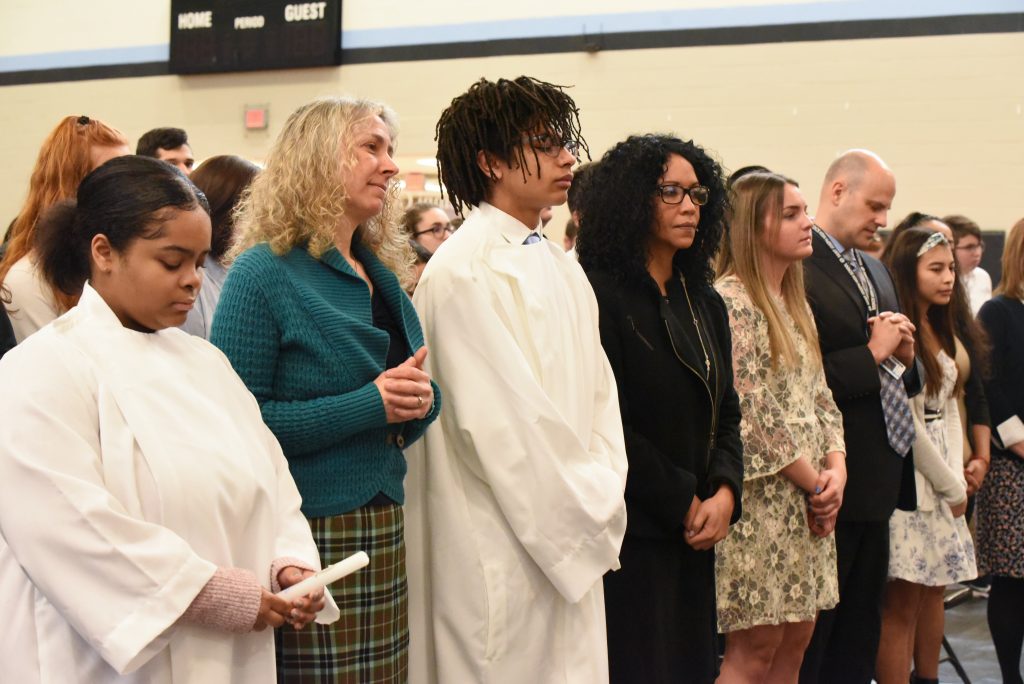 Students who were initiated into the Catholic faith or brought into full communion with the Church prepare for Communion. From left are Aaliyah Lax, Walter Wesson, Jessica Brandt and Nayeli Belmares, with their sponsors
or godparents.

Next he transitioned to a unique aspect of the day’s liturgical celebration, as four students joyfully received sacraments of Initiation. Aaliyah Lax and Walter Wesson were baptized as new members of the Catholic faithful, Jessica Brandt was received into full communion with the Church and Nayeli Belmares, alongside the other three, received the sacrament of Confirmation. Bishop Rhoades exclaimed, “The aspects of these sacraments are pretty overwhelming. I pray Aaliyah, Walter, Jessica, and Nayeli that you will always remember this day and that you will grow in God’s grace, in holiness, through the rest of your lives. May St. Joseph of Nazareth help us with his prayers to be faithful disciples of his adopted Son and to become saints.” 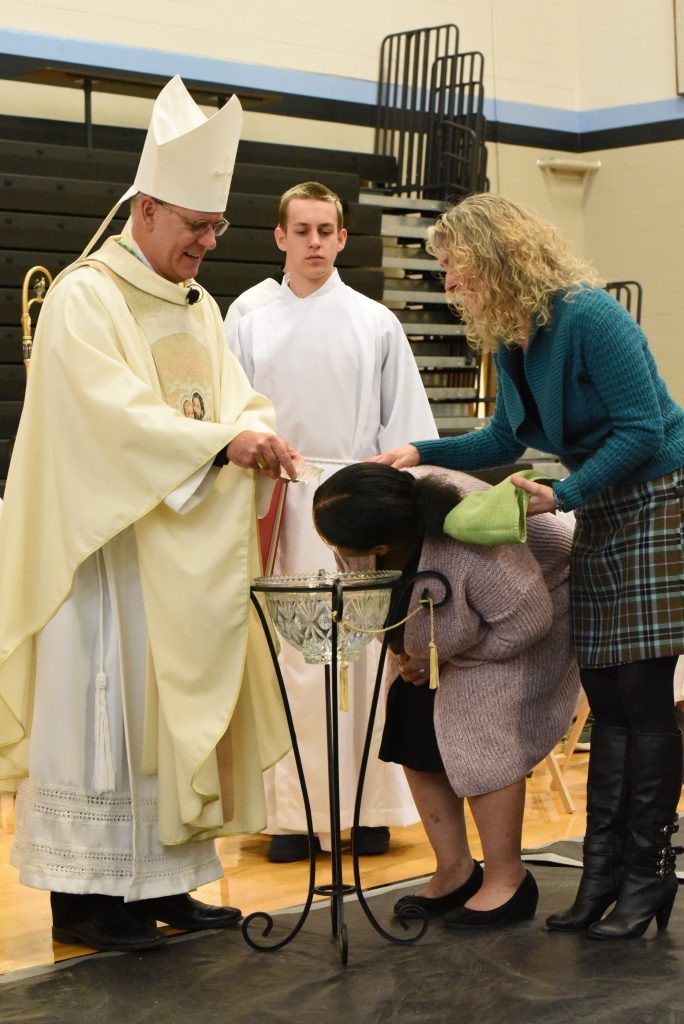 Aaliyah Lax, a senior at Saint Joseph High School, South Bend, is baptized by Bishop Kevin C. Rhoades on the feast day of St. Joseph, March 19. It was the first time in the history of the school that several students received sacraments of initiation during an all-school Mass. — Derby Photography

Lax, who chose the confirmation name Josephine after Josephine Bahkita, shared that she was first exposed to Catholicism as a student at Holy Family School in South Bend. Her awareness of the faith and desire to enter the Church continued to grow as a Saint Joseph student. When one of her friends entered the Church last year, she “knew she had to do it.” She added that the Church’s focus on service and compassion toward the poor was a major factor in her decision, which she witnessed firsthand in the life and lessons of Saint Joseph theology teacher Kathy Kershner, whom Lax chose as her sponsor.

At the conclusion of Mass, students Jack Briggs and Alexis Kilcoin presented Bishop Rhoades with a check on behalf of the Saint Joseph community towards Catholic Relief Services’ Gift of Hope Program.  Raised through a dress-down day collection, the funds will go toward the purchase of 70 fruit trees for those in need, donated in Bishop Rhoades’ name. 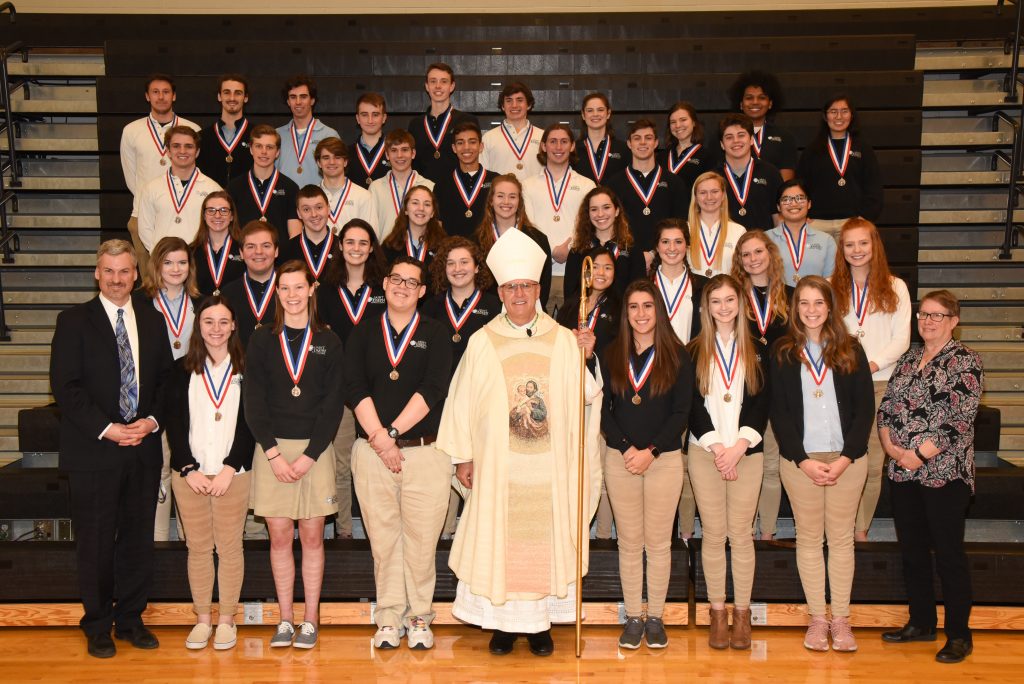 Members of the senior class who were recognized as Saint Joseph Scholars pose with Bishop Rhoades and principal John Kennedy, left, following Mass. The students maintained an average GPA above 4.0 during their high school careers.

National Honor Society President Claire Kloska next announced that Saint Joseph has been named as a Catholic Honor Roll School, a designation is given by the Cardinal Newman Society. The school has earned it continuously since 2006, and this latest designation will extend through 2023. Kloska stated that “this status was awarded to Saint Joseph for our strong integration of Catholic identity, including the integrity of our mission and the strength of our community and spiritual life. The honor roll also recognized our efforts in formation of students’ minds, bodies and spirits, as well as a comprehensive academic program which seeks to instill a Christian vision of the world, as well as human wisdom and culture.”

Continuing his pastoral visit, the bishop had lunch with members of the Student Council to discuss aspects of campus involvement and faith formation. He also visited a science classroom to speak with students on the intersection of faith and reason. 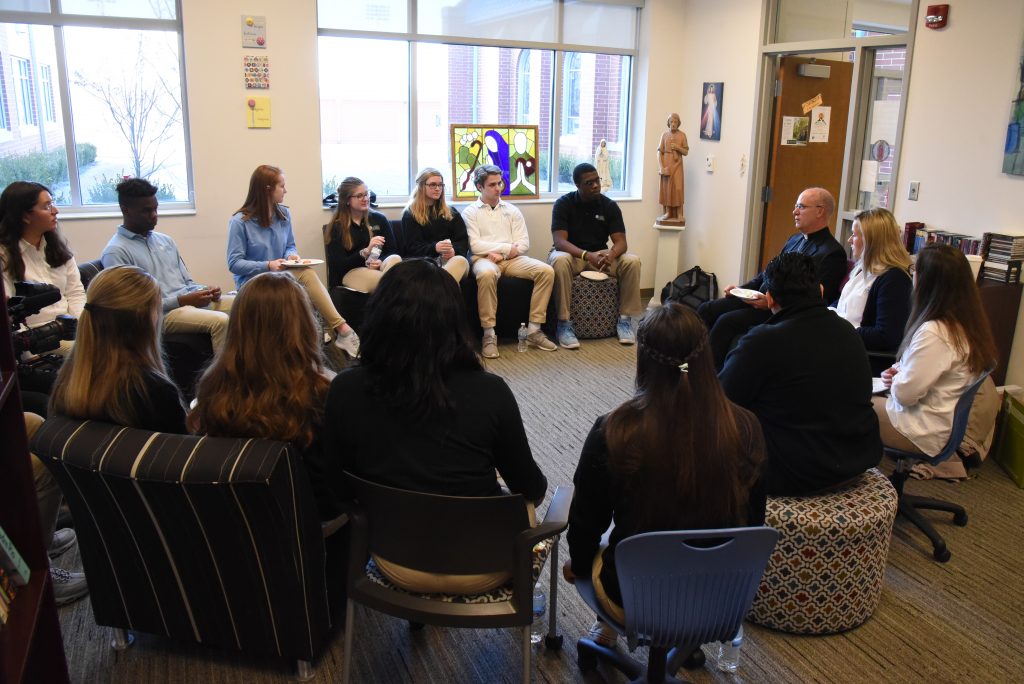 Bishop Rhoades meets with student leaders at Saint Joseph to hear about servant leadership projects in which they have been taking part in this year. Student activities represented ranged from the Right to Life club to athletic teams and the National Honors Society.

Bishop Rhoades additionally met with Kennedy, the theology faculty and campus ministry leaders to discuss aspects of Catholic identity, curriculum and programming.  He concluded the afternoon with a speech addressed to the entire faculty and staff on the importance of personal prayer in maintaining an authentically Catholic culture and promoting a consistent prayer life as the animating principle of a Catholic educational experience for both teachers and students.