Strzelecki accomplished the first-place finish with the help of her teammates, coaches, fans and her Catholic faith, she said.

“As a team, we try to incorporate Christ in everything that we do together. We usually begin practice with a prayer, any intentions the girls have, a thought for the day, and any wise words of spiritual encouragement that (coach) Bob Sedlmeyer has to offer us.” 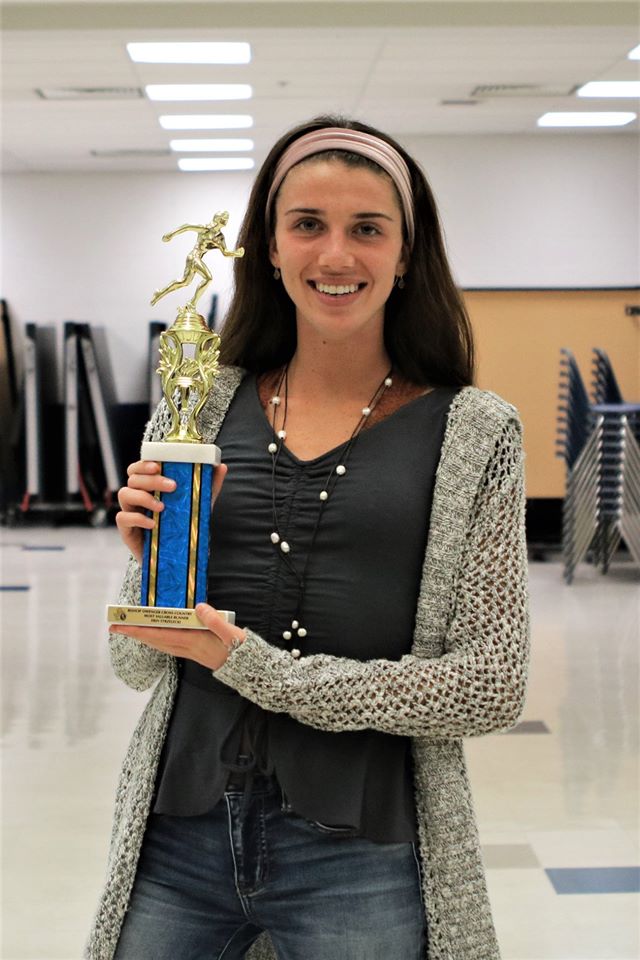 Strzelecki said Father Matthew Coonan, pastor of St. Vincent de Paul Parish in Elkhart, began running with the team this season because he was a friend of her family. “One of my favorite memories from this past state meet was having Mass in our tent — celebrated by Father Matt — just hours before my race.”

“I also thought it would be nice to have someone pace me during workouts because I knew how strong of a runner he is,” she added.

As Father Coonan continued to run with the girls, Strzelecki said she began to notice that the others enjoyed his presence too. “They grew close in friendship with him fairly quickly because of how approachable and sociable he is, and we all look up to him as a spiritual and running mentor.”

Maria Cavacini, a team captain, also believes that Father Coonan had a positive impact on the team this season, and recalled advice he gave them. “He told us to ‘be on the mile you’re on.’ This meant to always be in the moment, and was a great lesson he taught us.” 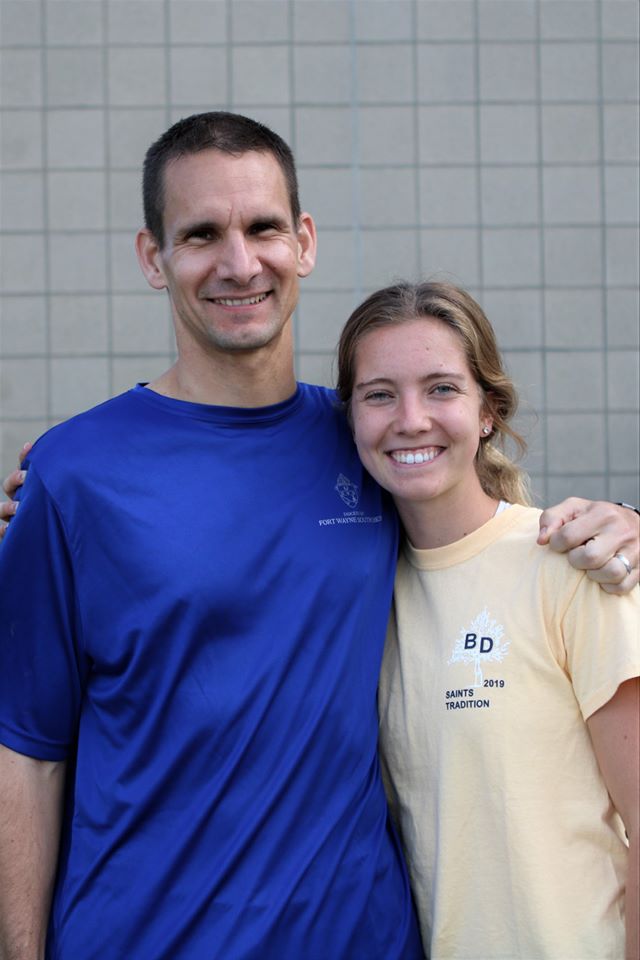 Team captain Anna Morris and Father Matthew Coonan are among the people Strzelecki credits with encouraging the whole team to put their trust in Mary as they exercised their talents in competition.

“We like to turn to Mary because she is such a good example to remain calm in all situations,” Morris continued. “We ask for St. Sebastian’s intercession because he’s the patron saint of athletes. St. Rose of Lima is a little bit of a new saint — we just started including her, and we do a little something special when we ask for her intercession,” said captain Rachel Siela. Junior Jackie Miles would sing St. Rose’s name, Siela said, and the team responded by singing, “Pray for us.”

“I think that this part of our prayer is so special because it always brings a smile to everyone’s face, and reminds us of the beauty of each of the saints.” Several of the girls also pray throughout their workouts.

Not only do the team members strengthen each other’s faith, but they do so in communion with several other Catholic teams.

Guerin Catholic High School, Noblesville, hosts the annual Indiana all-Catholic meet. “The Guerin Catholic meet is one of the team’s favorite races because after the race, all the teams gather in the gym for Mass,” said Morris. Cavacini added that she found it beautiful to see so many teams joined together for Mass after having just run.

While the Bishop Dwenger team did not qualify for the state competition, as it has in the past two years, consistent training and prayer qualified Strzelecki individually and brought her to the finish line 20 seconds in front of the runner-up at the championship meet in Terre Haute. In the days following, Strzelecki signed a letter of intent to run cross country and track for the University of Notre Dame this fall.