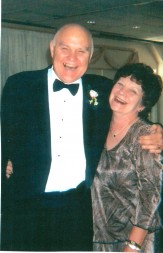 Irv and Bonnie Kloska have passed their commitment to stewardship on to their 12 children.

SOUTH BEND — For generations of the Kloska family of Elkhart, stewardship of time, talent and treasure has been a way of life. Irv and Bonnie Kloska raised 12 biological children, one adopted child (now deceased) and nurtured 11 foster children in their nearly 50 years of marriage.

The high school sweethearts moved to the area from Grand Rapids, Mich., and first attended Holy Cross Church in South Bend before moving to Elkhart where they’ve been parishioners at St. Thomas the Apostle Church for 40 years.

Irv said when it comes to stewardship, “The first thing you tend to think of is financial. But it’s a lot more than that. It’s time, talent and treasure.”

He said he personally likes to think of the big picture of stewardship and admits that’s partially because with raising such a big family they had to make their money stretch.

The couple believes that sending their children to Catholic schools and colleges has been a form of stewardship and they continue to support Catholic education. Irv said multiplied by the number of children it equals about 200 years of Catholic education and hundreds of thousands of dollars. Aside from supporting education and their parish, other favorite charities include the Women’s Care Center in South Bend and Food for the Poor. They also sponsor a child in the Dominican Republic through Christian Foundation for Children and Aged (CFCA).

Irv and Bonnie feel part of their stewardship is raising a big family in the Catholic faith, taking in foster children and sponsoring children.

“We believe that was our contribution to society — wanting to help children who needed it,” Irv said.

“It was good for our children,” Bonnie said. “They were able to “mother” the little infants and they knew they were here only temporarily.”

They almost always took in babies as foster children with the exception of their son Johnny, who they eventually adopted and who lived with them until he died in a car accident six or seven years ago at the age of 20. Twice they took in single mothers and their children that Bonnie met at the Women’s Care Center. 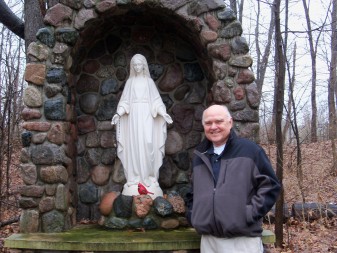 Irv Kloska stands by the grotto to Our Lady in the yard of his Elkhart home.

The couple always prayed the rosary with their family during Lent but after their first visit to Medjugorje in 1988 that family rosary became a daily event and they continue to pray the rosary daily.

“Now every one of our kids prays the rosary with their families — even little ones can sit still for one decade,” Bonnie said. “The rosary is an extremely important tradition in our lives and we’ve handed out hundreds of rosaries.”

The Kloskas have served their parish in just about every ministry over the years, giving of their time and talent where they could. These days their stewardship of time and talent is mainly through a ministry of prayers for healing.

Irv said in 1997, through a variety of means, he was made aware of a gift to pray for healing for others.

“People have come to us from all over and we’ve gone lots of places. It gives us an opportunity to evangelize as it seems as if most are non-Catholics or lapsed Catholics,” he said.

“We tell everyone what Catholics really believe about Mary and about the Real Presence of Christ in the Eucharist,” he said. “Everyone gets a rosary and an Immaculate Mary medal.”

They have countless stories of the Lord healing these people and in many cases, conversions to the Catholic faith have taken place as well.

Eucharistic Adoration is also very important to the Kloska family. Irv was instrumental in the design of the adoration chapel at St. Thomas and memorial funds for their son Johnny went to the building fund for the chapel.

“I’m so proud of them and how they’re living their Catholic faith,” said Bonnie. “I told them the worst thing they could do to hurt us would be to leave the Church.”

Daughter Lisa Marino has been the RCIA instructor at St. Matthew Cathedral in South Bend for the past 12 years, but has been an RCIA instructor for 20 years since she got out of college. Daughter Cheryl Murphy ran Catholic Charities in Elkhart until she married and began her family. Their son Bobby is in charge of campus ministries at Holy Cross College in South Bend. Cathy Downey and her husband taught at Saint Joseph’s High School and her husband is a football coach. Theresa Thomas writes for Today’s Catholic and has published a book. Karen has foster children and BJ found an “app” for his phone so when he is traveling on business he can find the nearest Catholic Church within walking distance to attend Mass.

Mary has done missionary work in Tanzania and is now a hermit with an official blessed hermitage.

“Dad always told us, ‘To those who have been given much, much is expected and you’ve been given everything,” she said.

The Kloska children were taught that just by the grace of being born in America with all the abundance and religious freedom they’ve been given much.

Cheryl said her stewardship heritage is not surprising because “You are formed by what you grow up with,” she said.

She doesn’t remember her parents ever using the term “stewardship.”

“We watched our parents; they lived it. We were aware that they supported the Church financially. They opened their home to foster children. You see it and you’re formed by it,” she said.

She said she and her husband Mike try to do the same thing with their six children by the way they share their faith, time and almsgiving. She said there have been years when it’s been easy to give to the Church and charities, and years when it hasn’t. She gave an example of a time when the family they sponsor through CFCA needed to rebuild their mud hut home and Cheryl’s dishwasher was broken and she was pregnant at the time. They chose to go without a dishwasher for nine months so they could send extra money to the family.

“For those months I washed dishes by hands it was a reminder to pray for the family. It made me feel more connected,” she said.

Her husband is a graphic designer so the children have been able to witness him using his talents to serve the Church.

Many of the Kloska’s 56 grandchildren are also carrying on the legacy of servitude. The Murphy children range in age from four to 14. The 14-year-old daughter volunteers at the Women’s Care Center and is waiting to be old enough to do some things on her own. “She really loves it,” her mom said.

The Murphys also take their children to the pro-life march at the courthouse each year. They’ve taught their children that it’s their responsibility to share their faith, explain and defend it.

“When your children can see how you approach problem solving using your faith — you can’t buy that kind of example for your kids,” Cheryl said.

Mary said stewardship is more than just writing a check. “It’s walking that extra mile — going to the store with someone in need and shopping with them. And when you don’t have enough, praying for generous people to step up.”

Bonnie said the entire family pulls together and gets on the same page when God is nudging one of them in a certain direction.

Her husband Irv summed it up with this statement, “Stewardship does not only have to do with the Church, but it also has to do with the Body of Christ.”