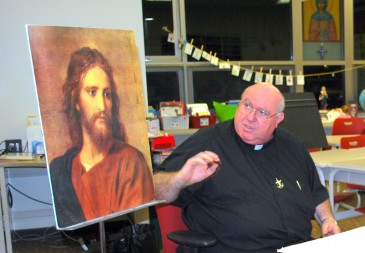 Father André Léveillé, speaks on “Forgiveness and Reconciliation” at the November Stephen Ministry supervision meeting. Father Léveillé reports that this is his favorite picture of Jesus because it depicts the complete love and forgiveness Christ shows for us.

GRANGER — As Christians worldwide wait in joyful anticipation for the celebration of the Incarnation of the Lord, plans for friends and family gatherings during the 12-day Christmas season begin formation. But for individuals that have recently faced a loss or crisis, the upcoming festivities can be fraught with anxiety or depression.

In the summer of 2008, St. Pius X parishioner Carol Swope approached Msgr. Bill Schooler and the parish council with the idea of establishing a Stephen Ministry at the church. Swope was commissioned a Certified Stephen Ministry Leader in a previous church and believed the program would be a good fit at St. Pius.

The concept of the ministry is for trained laity, called Stephen Ministers, to offer support to those in the congregation — referred to as care receivers — that need a compassionate ear to listen to their concerns.

According to the Stephen Ministry Web site, “lay caregivers (called Stephen Ministers) provide one-to-one Christian care to the bereaved, hospitalized, terminally ill, separated, divorced, unemployed, relocated and others facing a crisis or life challenge.” The program is nondenominational and has over 10,000 Christian congregations across the country participating in this ministry.

Swope personally meets with those who are interested in becoming a Stephen Minister. “I usually sit and talk to each applicant for a good hour to learn more about their skills and their life experiences. Then I have to make a determination to see if this will be a good fit for them,” she explains.

A minimum of 50 hours of classroom training is required before a person becomes a commissioned Stephen Minister. After they are commissioned, they continue to meet once a month for supervisory classes to discuss skills that are working for them. Names are never mentioned in the classroom.

“Confidentiality is a huge component of this ministry,” says Swope. “When someone is assigned to a caregiver, the only names that are exchanged are between me as the leader, the care giver and the care receiver.”

In January of 2011, St. Matthew Cathedral parishioners will join the next group of trainees at St. Pius so they can begin a Stephen Ministry at their parish. “Our goal is to incorporate a lot of the Catholic parishes in our community and we can be the training and supervision hub. It’s a lot nicer when you can cross reference people across congregations because sometimes you get someone who is uncomfortable with someone that they see at church. But most people are just happy to have someone who will talk and listen to them.”

Swope notes that the program has had its share of successes and challenges. “The successes of the program are when people find wholeness and when they have spent time with their Stephen Minister who has helped them not only emotionally but spiritually.

“The challenge is sometimes getting the word out that it is okay to come and talk about your feelings. There are so many broken people and in one way or another we are all broken. It is through the healing grace of God that those broken pieces are healed,” Swope emphasizes.

St. Pius parishioner Gwen DeLee finds many personal rewards as a Stephen Minister. “People come alive and regain their hope and energy for life when someone cares enough to listen to them without judging or trying to fix them. The compassion of Jesus is at the forefront, and the guidance of the Holy Spirit has often been almost palpable during our meetings.”

She adds, “Many times I said prayers of thanksgiving after a session in which I had seen the Lord working powerfully in their life. The prayer time was also very important in the context of our meetings. It was received gratefully, and obviously bore much fruit for each of us.”

Swope emphasizes that Stephen Ministers are not a substitute for those needing professional counseling or those seeking Reconciliation.
“Stephen Ministry is the perfect path to walk to the confessional. When you have had a chance to talk through the issue and open yourself up to begin healing, then you can take it to the confessional and leave it there.”