Bishop Kevin C. Rhoades presided over the dedication and blessing of a bronze statue of St. Katharina Kasper, foundress of the Poor Handmaids of Jesus Christ congregation, on the grounds of the motherhouse at Donaldson April 9.

Prior to the unveiling and blessing, Sister Joetta Huelsmann, PHJC provincial, welcomed everyone. “As we bless St. Katharina’s statue, I pray that hopefully this will be the beginning of many people coming to pray with her and also model her life and spirit,” she said. “We have much to be grateful for.” 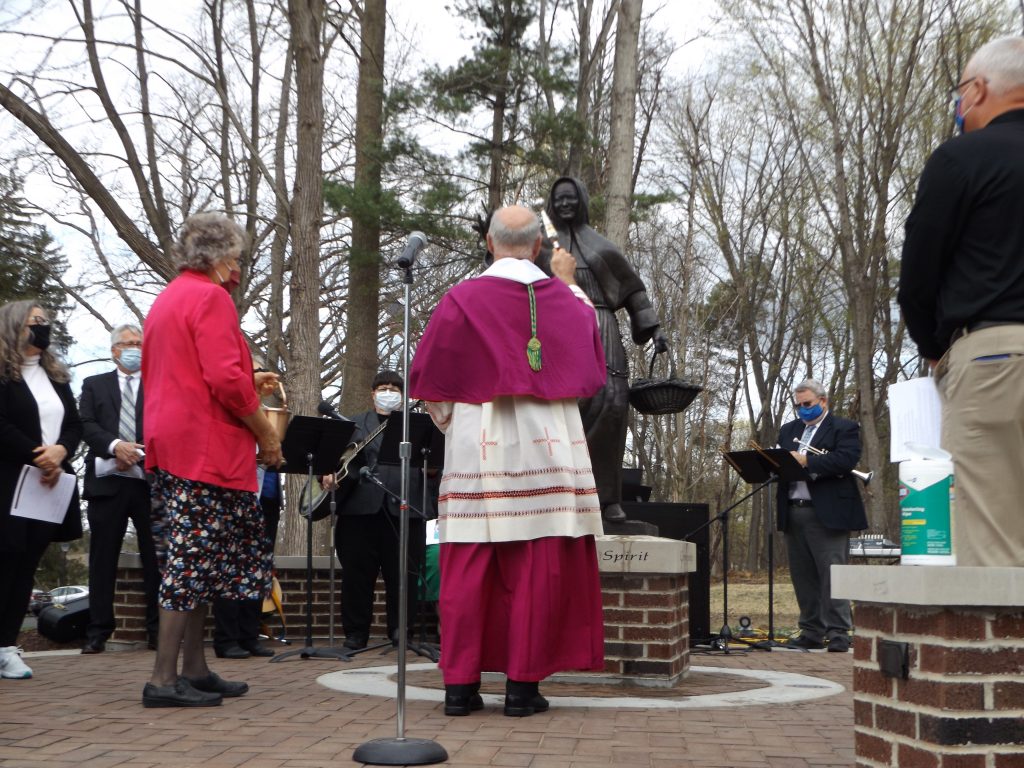 Led by Geoff Williams, director of ecological services, several people offered hopes for the dedication, including “that when we look at the statue of St. Katharina Kasper who has followed Christ faithfully, we will be motivated to do the same,” Williams said.

The sculptor shared a few words. He said he was “blessed with the opportunity to create this sculpture. It was my privilege to create this bronze sculpture of St. Katharina.”

During the process, he had met several times with the sisters. “As an artist, I always ask the clients to tell me insights of what the sculpture represents.” Those ideas become part of the sculpture. 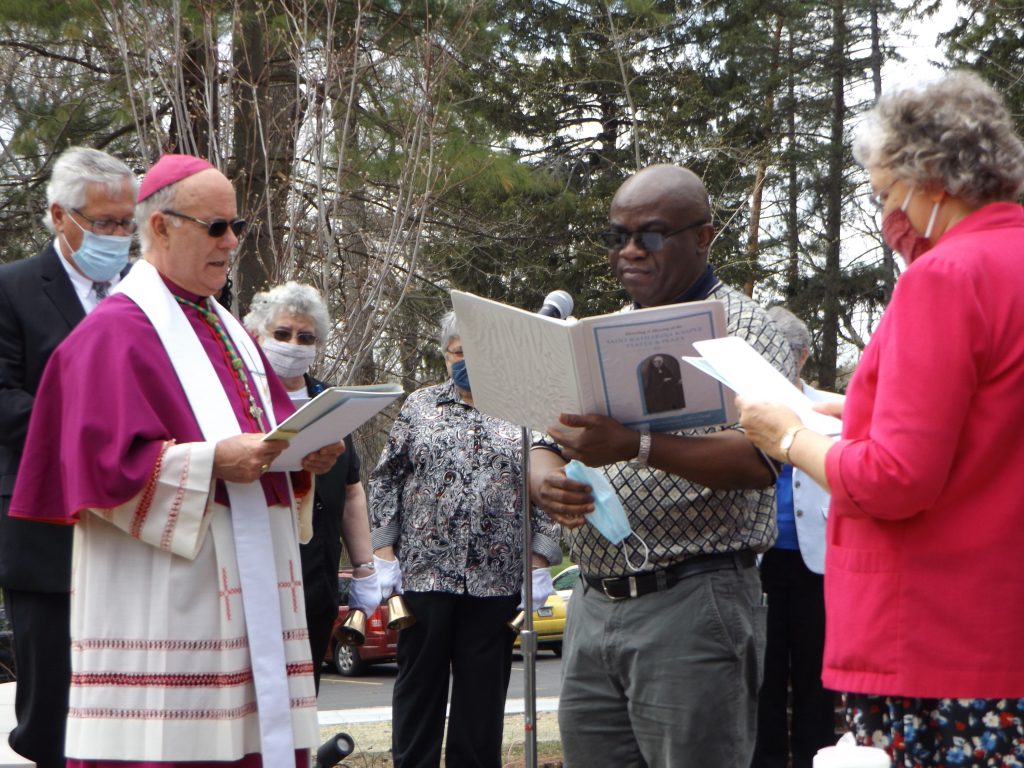 The Gospel from Matthew 5:1-12a — the beatitudes — was proclaimed by Father Michael Okoro.

“Most important to the sisters were special shoes, strength, cobblestones, pears in a basket (representing the pears and bread she’d give to the poor as a child), compassion and an inviting spirit,” he said. “My favorite of all was one sister who said, ‘Please make her 50 years old, at least, because none of us have figured anything out before 50.’”

The sisters prayed for him and for the project. “I can tell you the Holy Spirit is alive and well at Donaldson,” Layman said.

The statue was unveiled, and Bishop Kevin C. Rhoades offered a blessing.

“Lord God, today we praise you for the gifts of the Spirit bestowed on St. Katharina Kasper, in whose honor we dedicate this statue and declare this plaza to be a holy place of prayer and reflection,” he said. “May we follow in the footsteps of Jesus Christ, keeping before us the example of St. Katharina. May we proclaim Christ’s Gospel by word and deed like St. Katharina and shouldering our crosses daily, expend ourselves in joyful service. May we, as followers of the charisms of St. Katharina, also profess to listen prayerfully, live simply and serve joyfully. May we always strive to the values of dignity and respect of all, openness to the Spirit, community and simplicity in our lives.”

He also asked for a blessing on the plaza created for the statue, “nestled in this forest as holy ground upon which our Potawatomi sisters and brothers originally walked and where St. Katharina’s image now rests. Grant that all who walk on this holy ground who in the presence of this statue offer devotion to Saint Katharina, may by her merits and intercession obtain your grace in this life and everlasting glory in the life to come.”

“I love this statue. This will be a great place for people to pray,” he later said. He thanked the artist and architect for the holy work they had done.

He said St. Katharina always carried the book, “Imitation of Christ” by Thomas a Kempis, meditating on the passages and absorbing the teaching and that it helped her to imitate Christ. He said while all the Beatitudes could apply to St. Katharina, “Three of the Beatitudes particularly come to mind when I think of Mother Mary Katharina.” Those were the blessings of the poor in spirit, the meek and the pure of heart. “She was incredibly humble and appropriately took the name for the congregation the Poor Handmaids of Jesus Christ.”

He said even though she was the leader of the congregation she mopped floors, made beds and bandaged wounds. “That humble poverty of spirit stayed with her even as the congregation grew,” he said, and despite their material poverty being very real.”

Bishop Rhoades said the pure of heart were those who “loved God with undivided allegiance and single-handed pursuit of God’s will — this was St. Katharina’s inner life.”

He concluded, “She was a woman of the Beatitudes. I pray that everyone who passes by this statue or who prays in this plaza will be inspired by her example. May she intercede for all of us and help us live the Beatitudes in imitation of Jesus and one day be with her and all the saints in peace and joy in heaven.”

Libby Riggs, director of PHJC associates, and Loretta Peters, Fiat Spiritus Community, offered the intercessory prayers asking the Lord of the graces of St. Katharina Kasper including her attentive, listening heart, her openness to be moved by the Spirit, her constant seeking of God’s will, her sensitivity and compassion in ministry, her boldness to stand against mistreatment and injustice and her bold living of humility.

The closing song, “Poor Handmaid’s Anthem,” was written by Sister Colleen Bach and accompanied by handbells.

Afterward, Sister Connie was asked what the day meant to her. “It’s thrilling. We started working on this right after her canonization. It’s an opportunity to show our gratitude to Sister Katharina from all of us who follow in her footsteps and her charisms,” she said. “It feels like an extension of her canonization in Rome.”

A saint’s life: Germany and the U.S.

Katharina Kasper was born on May 26, 1820, in Dernbach, Germany, the eighth child of a peasant farmer and his wife. The domestic conditions in which she grew up gave her empathy for the plight of the poor, especially the rural poor. Because of these experiences she felt inspired by God to help them and awakened in her the decision to devote herself entirely to serving them.

On Aug. 15, 1851, Katharina and four companions received the religious habit and professed their first vows. This was the birth of the Congregation of the Poor Handmaids of Jesus Christ. Katharina, who was to lead the congregation, was given the name Mary.

The congregation grew quickly and expanded its ministries and activities to other countries and regions. On June 1, 1870, the Vatican endorsed and confirmed the congregation and Katharina became superior general. Pope Leo XIII gave the final approval of its constitution May 21, 1890.

Katharina Kasper died Feb. 2, 1898, and at the time of her death, 1,725 sisters belonged to the congregation, ministering in Germany, the Netherlands, the United States, England and the Czech Republic. The work that the sisters do includes pastoral care, health care, education and care of the elderly, children, disabled and refugees.

The beatification of Katharina took place in Rome. Pope Paul VI gave her the title of “Blessed” on April 16, 1978. The community received the support of the Bishop of Limburg, Bishop Franz-Peter Tebartzvan Elst, for the cause of canonization and paved the way via a private audience with Pope Benedict XVI in February 2012. On March 6, 2018, Pope Francis recognized the healing miracle caused by the intercession of Blessed Katharina and on October 14, 2018, canonized her in Rome. The name Pope Francis bestowed on her at the canonization is St. Katharina Kasper, foundress of the Poor Handmaids of Jesus Christ.

In November, the Vatican gave permission for the official inscription of St. Katharina’s feast day on Feb. 1 to be included in the Proper Calendar of the diocese as an optional memorial.

St. Katharina is the third saint with a connection to the Fort Wayne-South Bend Diocese to be inscribed into the proper calendar. Previously St. Mother Theodore Guerin, who founded the first Catholic schools in the diocese and Blessed Solanus Casey were also inscribed.