Visitors to the Cathedral of the Immaculate Conception in Fort Wayne over the past few months have been greeted by a new statue of Blessed Solanus Casey as they enter the building.

“He came up to our suite and we discussed the possibility of a new statue for the cathedral,” said Brian Baker, Owner of the Connecticut-based company. “He told me about the subject matter, which was Father Solanus. We told him we could do a design, put it together for him. He showed me the area. I asked if he could send me some photos of exactly where it’s going to be. They had a nice area for it.”

He was ordained as a simplex priest due to academic limitations. This means that, unlike a typical priest, he could not preach at Mass or hear confessions. While assigned in Detroit, he became well known for his services for the sick, and many considered his intercession to be instrumental in their healings from illness.

Baker said that the style and size of the statue of Blessed Solanus Casey were specially curtailed to fit the unique niche near the entrance of the cathedral, and that another special request was incorporated into the design.

“They wanted to put a relic in, and we had to accommodate that too. So we had to do a custom design, with a reliquary where the relic would be able to be put in and on display. That’s really the information I needed to start going along.”

The statues that Baker sells in the U.S. are sculpted by a family in Val Gardena, a valley in northern Italy. He said that, for the statue of Blessed Solanus Casey, he traveled to Europe to meet with the sculptors and to check in on the statue’s progress. 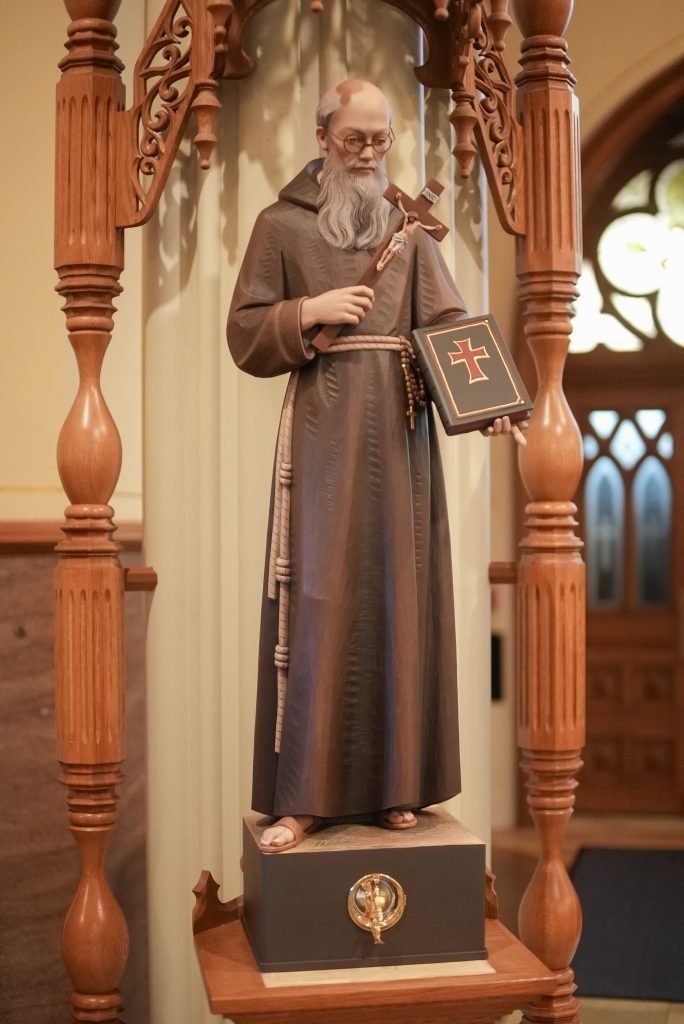 Samantha Rohloff
A new statue of Blessed Solanus Casey, created by Baker Liturgical Art, rests in the entryway of the Cathedral of the Immaculate Conception in Fort Wayne. The Capuchin priest resided at St. Felix Friary in Huntington for a portion of his priestly life.

“We really are hands-on. Our customer gets what we expect and what they expect.”

Brothers Mauro and Hans were the artists behind the hand-carved, linden wood rendition of Blessed Solanus Casey with his notable beard and Capuchin attire, explained Baker. “Linden wood is very soft wood that you’re able to really get the features very sharp,” he noted, adding how “real” the statue appears.

He said its creation took about eight months … and to provide “a harder finish,” he said, this specific statue was detailed with oil-based paint as well.

The gold-plated and lacquered reliquary that was requested “will hold a first-class relic from the body of Blessed Solanus himself,” said Father Jacob Runyon, Pastor at the Cathedral of the Immaculate Conception. The relic is a piece of Blessed Solanus Casey’s bone.

Baker’s son, Garrett, was present at the installation of the statue at the cathedral in May.

“He recently has come into the business with me,” Brian said, indicating that the induction of Garrett into the company brings the business into the third generation in the Baker family.

“He grew up in the business. He went away to school; he became a chef, a culinary. Then he decided he wanted to try his hand in the business. I made him go back and get a business degree, and now he’s working for us.”

Besides fulfilling Bishop Rhoades’ request for the statue, the Baker family has kept itself busy with several high-profile projects over the last several years, and have even played a role in papal visits to the U.S.

“We also do a lot of work when the Holy Father comes to America. We design his vestments and all the staging and stuff for some of the events when he comes in.”

Baker indicated that Bishop Rhoades and Father Runyon were very pleased with the final design and installation of the statue of Blessed Solanus Casey, and he stated that it “looks like it’s always been there.”