It was a storybook season that had it all – a slew of close games, a classic battle against rivals, a high-scoring star player, and an improbable postseason run. Even though it lacked the fairy-tale finish, this Marian High School boys soccer season is one that senior forward Jaxson Hundt and his teammates won’t soon forget.

“Marian has been really everything to me,” said Hundt. “It’s really special to see how we all came together and went on this big run to state. It’s definitely a dream come true.” 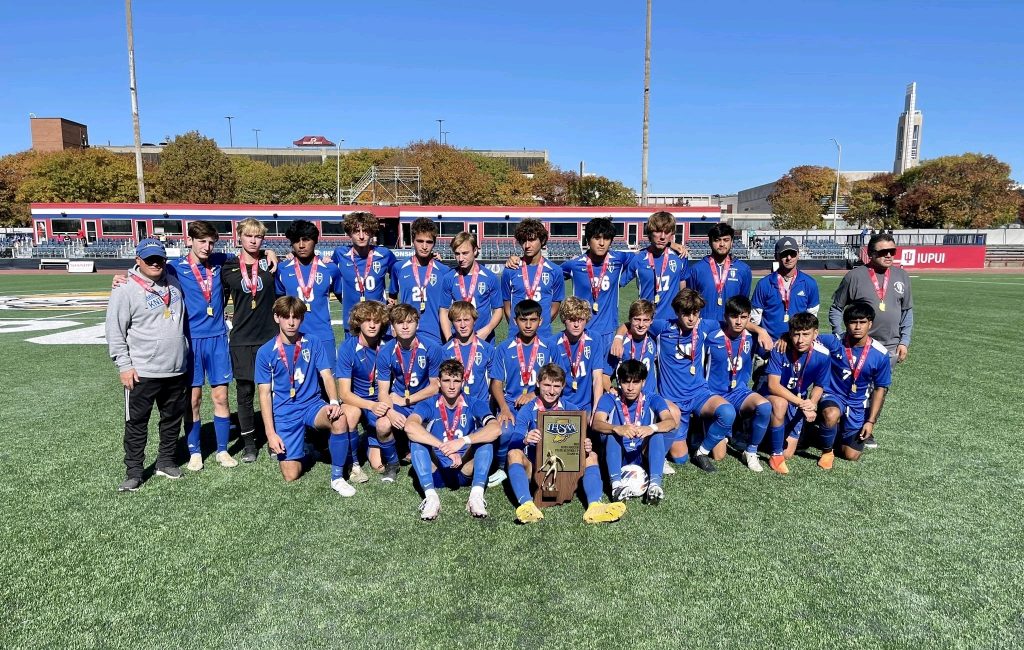 Provided by Ben Householter
The Marian boys soccer team poses together after falling 2-1 to Brebeuf Jesuit in the Class 2A State Championship game at IUPUI’s Carroll Stadium on Oct. 29.

That dream culminated with a 2-1 overtime defeat in the IHSAA Class 2A State Championship game against Brebeuf Jesuit at IUPUI’s Carroll Stadium on Oct. 29. The fourth-ranked Knights (18-2-2) took a 1-0 lead in the second half on a header by Hundt, only to see Brebeuf (17-4-1) rally for its second straight state championship. Marian’s first trip to state since back-to-back titles in 2015 and 2016 was one that not many saw coming – and that includes head coach Ben Householter.

“This season was kind of a surprise,” admitted Householter. “We hadn’t won a sectional since 2016, when we won state the last time. So these seniors had never won a sectional at all.”

That didn’t stop the Knights from setting some lofty goals at the beginning of the season: go undefeated in conference play, get past rival Saint Joseph in sectionals, and go on a state run. Despite only returning five starters from the prior year, junior goalkeeper Noah Balyeat said the team believed that something special could be in store.

According to Hundt, this confidence stemmed from the close-knit nature of the team and the trust that the players had built in each other.

“I really thought that our family culture and how we carried ourselves really set the tone for this year,” said Hundt. “Every single Friday, we had a ‘Get-to-Know-You Friday.’ So we all got a partner and shared something fun about ourselves, just to get to know each other so we can build that family culture.”

Fortunately for the Knights, this culture carried over onto the field all season long. Marian’s stout defense registered 11 shutouts, while its offense clicked with Hundt at the helm. The four-year starter scored a blistering 29 goals on the year, giving him 67 in his illustrious career with the Knights.

“Jaxson’s been our go-to forward all season,” said Householter. “Sometimes we had to get on him about being more selfish and wanting to score, because he wants to get his teammates involved and get them set up. He’s a tremendous worker, a rare talent that doesn’t come around a lot, and a great young man to be around.”

In fact, Hundt scored in every one of Marian’s postseason games this year, including a 4-3 overtime thriller vs. Saint Joseph in the sectional championship. The Knights then edged Northwood 1-0 and top-ranked West Lafayette 2-1 to capture the program’s seventh regional crown. After a 3-2 semi-state win over Canterbury – Marian’s fourth straight victory by a single goal – the Knights had piled up a 10-game winning streak. Yet it was still a surreal moment when Balyeat and his teammates stepped onto the field at Carroll Stadium to play for a state championship.

“It was a little hard to believe that we were there,” said Balyeat. “It was really cool to walk out of the tunnel at IUPUI, and you just get that elevated look of the field, and it was like, ‘This is it. We’re really here.’”

Balyeat had his work cut out for him against the third-ranked Braves, but the junior notched seven saves on the day as Marian and Brebeuf battled through a scoreless first half.

“He had a tremendous game; he’s been tremendous for us all year,” Householter said of Balyeat. “He was definitely a brick wall back there saving us many times in the season. During the [championship] game, there were definitely some close shots that he took care of. He’s really fearless back there for us.”

The Knights would finally break through in the 49th minute. Freshman Victor Aguilar put a cross in to Hundt, and the senior scoring machine did the rest.

“I just saw the ball coming and tried to go back post behind the guy, so I headed it in,” said Hundt. “I really wanted to put some power on it, but it really came off my head nicely and curled in to the far post.”

However, Brebeuf tied the game 12 minutes later, and the teams remained deadlocked at the end of regulation. Despite the Knights’ experience in close games and overtimes, they were unable to capitalize on their opportunities in the extra period. Instead, Brebeuf’s Mateo Soria scored the game-winning goal in the 86th minute – a shot that not even Balyeat, who only allowed 17 goals the entire season, had a chance at stopping.

Amid the painful sting of defeat, Householter was clear when addressing his team after the game.

“My message to them was I’m just so proud of them,” said Householter. “They accomplished all their goals this year, and they worked so hard to get to this point. They went above and beyond what my expectations were this year. Just hold their heads high and be proud of what they’ve done.”

“When you look back at the season, it was truly an amazing season,” agreed Balyeat. “There was great effort put in by all the boys. Unfortunately, we lost at state, but it takes a lot to get there, so we’re still very proud of the season.”

At school Mass on Tuesday following the championship game, Hundt said the Lord brought clarity to what they accomplished together over the past three months.