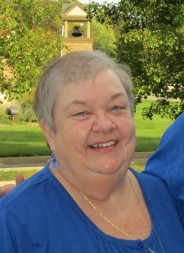 If she had just lived another 12 days, Cheryl Mowan would have celebrated her 50th wedding anniversary with her husband, Mike. Instead, Mowan entered the Lord’s presence Saturday, May 27, after a long struggle with breast and bone cancer.

The daughter of the late Maurice and Arleene (Richards) Cooper, the Fort Wayne resident worked at St. Therese Church as a secretary, bookkeeper and pastoral minister of services. A graduate of Central Catholic High School and St. Francis College (now USF), she was member of St. Therese, the St. Vincent de Paul Society and the Third Order Franciscans. She served on the church building committee, including as president.

Mowan won several prestigious awards for her volunteerism and ministry.

Friends who knew and loved Mowan can still hear her happy laugh. They see her in silent prayer and recall her words of compassion to those in need.

Mowan always kept the poor foremost in her heart. Her friends continue to celebrate her life of giving to others and the difference she made in many people’s lives.

“I’ve known Cheryl for more than 30 years, and she had one of the biggest hearts of anyone I’ve ever known,” said Theresa Driscoll. “So often, she was rushed to get her work done at St. Therese because she was always interrupted by people needing her help, and they always came first. She really taught me that ministry, as a Christian, means listening to and serving the person right in front of you, no matter what else you might have planned for your day.”

Parishioner Terri Dossen concurred. “I remember being so inspired by the love Cheryl and Mike had for each other and how they opened their home for marriage classes for Jeff and me. I will never forget their love and kindness.”

Ginny Fenstermaker, who worked with Mowan for more than 10 years in the St. Therese RCIA program, said: “I first met Cheryl in 1975 when we joined St. Therese parish as newlyweds. She helped start a food bank at St. T and an underwear ministry for the local jail population. In RCIA she made those on the outside feel welcome and normal — whether divorcees, people with addictions or mental illness and those with other issues.”

Vince and Marty LaBarbera, close friends of the Mowans’ for more than 40 years, served together on committees at the parish and at Bishop Luers High School.

“She had a knack for making others feel needed and appreciated,” Vince said. “Cheryl had a real affinity for being able to give from her heart. Her vibrant personality will be missing, but the Cheryl we knew and love deeply will always be a part of us.”

Several programs were instituted under Mowan’s volunteer leadership of the St. Vincent de Paul Society, said volunteer Donna Brooke — including an annual fundraising event that supports conferences. She also developed a marketing directory position so the organization could have grants written to help the store and district. “She greatly assisted me in my St. Vincent de Paul presidency, with her business acumen and gentle guidance, before becoming the Fort Wayne District Council president herself for six years,” said Brooke. “She was a dear woman who had the biggest heart and served with joy; she will truly be missed.”

Jim Bugert, a classmate of both the Mowans’ at Central Catholic High School, summed up Cheryl’s essence. “I never heard Cheryl say anything gossipy about anyone, which must be a difficult thing to do as I know no one else with that attribute. “I only know Cheryl loved Jesus, because she acted just like him.”